In Focus: Religious Tourism In The Kingdom Of Saudi Arabia

Prior to 1946, around 60,000 pilgrims visited Mecca annually; that's a 500x expansion in annual pilgrims to be witnessed in 84 years, should Vision 2030's target of 30 million pilgrims per year be realized.

Hajj and Umrah are religious pilgrimages performed by Muslims from all over the world. Hajj is an annual six-day pilgrimage to Mecca made by over two million Muslims each year; Islam requires every financially and physically able Muslim to make the journey once in their lifetime. Umrah is a shorter pilgrimage to Mecca that can be performed at any time of year; over 19.1 million pilgrims completed Hajj in 2019.

Hajj and Umrah pilgrimages have taken place over centuries, with the first Umrah pilgrimage recorded to have taken place in 629 CE. Islamic scholars have said that the first Hajj was led by Prophet Muhammad, may peace be upon him, himself in 632 CE, the year of his death. Hajj is the world's largest single annual human gathering today, with nearly 2.5 million pilgrims descending on Mecca together at once, over a one-week period each year. Prior to 1946, around 60,000 pilgrims visited Mecca annually; that's a 500x expansion in annual pilgrims to be witnessed in 84 years, should Vision 2030's target of 30 million pilgrims per year be realized.

The Ministry of Hajj and Umrah is responsible for all pilgrim-related activities, coordinating with over 30 government entities to support the sector, which has over 350,000 people employed by it. In 2020 and 2021, the Ministry cancelled Hajj pilgrimages for non-domestic Muslims due to the health and safety concerns surrounding the COVID-19 pandemic. This proved to be a grave disappointment for Muslims worldwide, and it also had significant economic repercussions on the Saudi economy. Religious tourism contributed the vast majority of the 3% tourism contribution to Saudi Arabia's GDP in 2016. The pandemic has reminded the Kingdom that diversification of not only its economy as a whole, but especially of its tourism sector, is vital for long-term sustainability; it has also highlighted the importance of developing its domestic tourism infrastructure and opportunities. 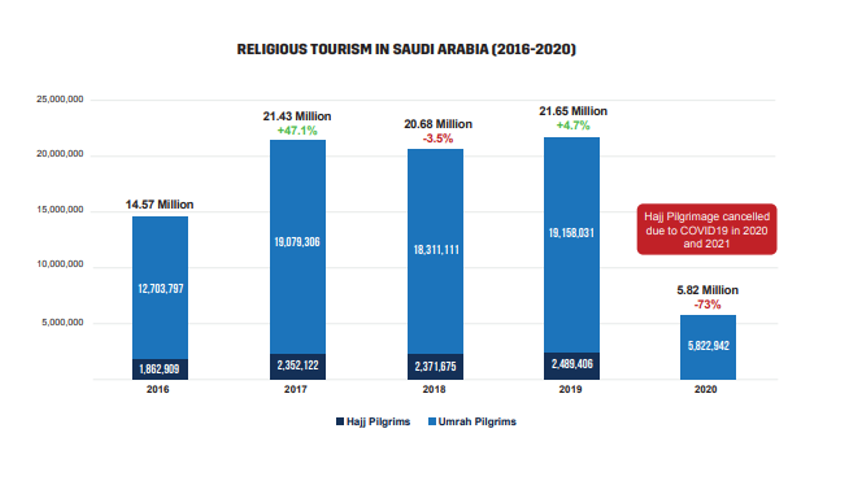 In 2019, the Doyof Al Rahman Vision Realization Program (DARP) was launched under the umbrella of Saudi Arabia's Vision 2030, in order to create a seamless and memorable pilgrim experience program, from airport arrival, to customs, to hotel stay, and transport and logistics throughout. The goal of the program is to upgrade and deliver a distinguished experience for all pilgrims coming to the Kingdom, removing any unnecessary hassles so that they can focus on their personal spiritual journeys. This includes facilitating an e-visa process as well as a seamless arrival into the Kingdom with adequate transportation and logistics to both accommodation and the pilgrim's journey to and from the Two Holy Mosques and holy sites. The pilgrim's journey mapped out in the DARP program also includes initiatives to ensure rituals are performed safely, access to comprehensive health coverage, and ability to extend stays to discover Saudi Arabia's cultural and heritage sites.

DARP has already made strides in implementing several key initiatives that have supported a better pilgrimage experience in the Kingdom, such as, but not exclusive to: 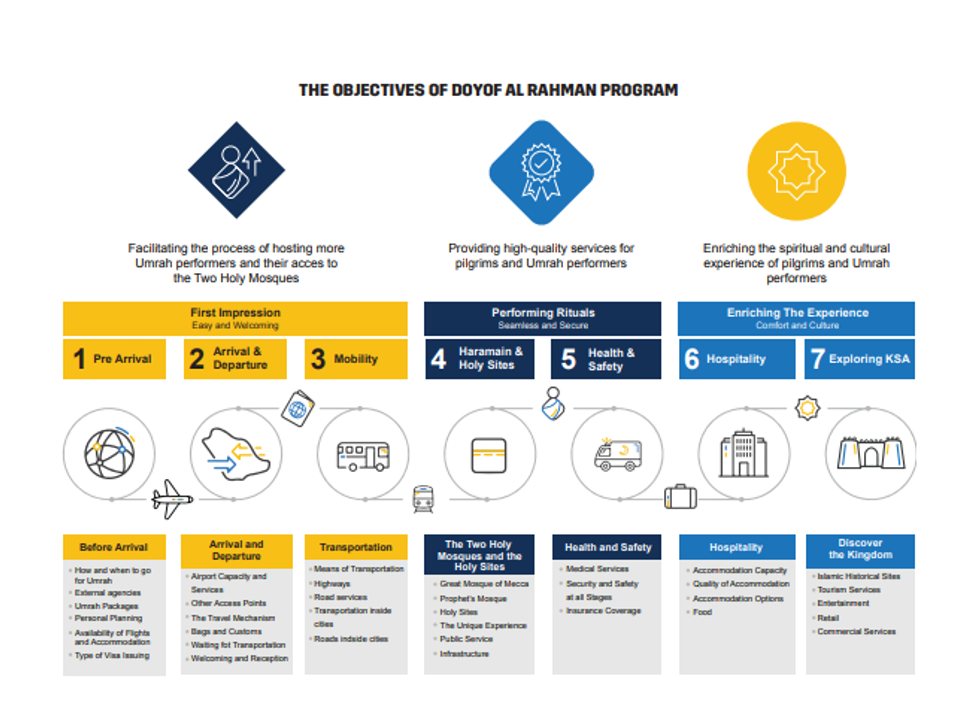 It is the intention of the Ministry of Hajj and Umrah to implement technological advancements wherever it may help to facilitate a better pilgrimage experience, or enhance health, safety, and security. In line with this, there have been several pilot projects, testing the efficacy in distributing digital wristbands and contactless access cards to pilgrims that securely store digital identity information, necessary permits, visa and health information, and immigration documentation. Some of the piloted technologies have also included digital contactless payments functionalities to facilitate easier payments and access throughout the pilgrimage, as well as geotagging for traffic monitoring and safety.

In interviews conducted about such schemes, it was said that contactless ID cards had higher success rates in many of the pilot programs, as many pilgrims had taken off, lost, or accidentally exchanged their wristbands with someone else when washing before prayer. The aspiration in the future is that every pilgrim will get a RFID wristband or contactless card that helps keep all of these important documents and information securely, while also providing easy payment and access to their transportation and accommodation. Indeed, it is a technologically advanced vision of how an integrated visitor experience could be in the Kingdom.

Other programs that have been piloted include the Pilgrimage without a Bag program. This program assists in transporting pilgrims' bags to their accommodation so that it is waiting for them when they arrive. Improvements in food services have also been rolled out, expanding the provision of readymade meals at holy-sites. The Ministry of Hajj and Umrah have also invited young Saudis to volunteer to be assistants, encouraging them to help pilgrims in need of support. There was also a crowd management program that built six transmitting stations and installed 350 sensors placed throughout Mina and at Jamrat Bridge. This network will gather and analyze data about overcrowding and movement of pilgrims. Crowds and movement will also be monitored on high-definition cameras, and the collected data is analyzed at a dedicated crowd-monitoring center.

In line with another Saudi Vision 2030 target of becoming a 70% cashless economy by 2030, the Saudi Central Bank (SAMA) along with the Ministry of Commerce ran a point of sale (POS) system implementation drive across the country, including Mecca and Medina, a region where POS penetration has historically been amongst the lowest in the Kingdom. A POS Machine Implementation Enforcement Program was rolled out in 2019, and was finished in 2021. The implementation of POS systems is meant to both facilitate easier payment transactions for pilgrims and tourists visiting the region, while also cracking down on money laundering and tax evasion by small merchant businesses after the country implemented VAT in 2018. Hajj Bank Cards have also been issued by several local banks, allowing pilgrims to deposit money onto them when they arrive into the kingdom, so they don't have to carry around cash with them.

In 2018, it was announced that King Abdullaziz International Airport (KAIA), Saudi Arabia's largest airport in terms of passenger traffic, would begin looking at expansion works for a new US$7.5 billion passenger terminal dedicated to Hajj and Umrah pilgrims. KAIA handled 31.15 million passengers in 2016, some 3.5% more than in 2015. The masterplan envisages increasing capacity up to 42 million passengers a year by 2025, and 80 million passengers annually by 2035. The new Hajj terminal will be able to process over 7,000 arriving and departing passengers an hour, and will be able to accommodate 80,000 passengers at any one time. The new wing would also cater to the specialist dietary and religious needs of the travelling pilgrims. However, the KAIA construction project was temporarily put on hold during the pandemic.

A new international airport in Taif has been under construction since 2019, with it also becoming an increasingly popular summer resort destination in the Kingdom. The current Taif Airport, with the capacity to handle just over half a million passengers each year, is 30km east of Taif city and 70km from Mecca; though classified as a small regional airport, it does handle a few international flights as well. The new airport to be constructed 120km from Mecca will have a six million passenger capacity when finished, and is expected to help relieve the pressures on KAIA to cater to all 30 million pilgrims expected to travel to Mecca annually, by 2030.