In Tune With The Self: Deepak Chopra Believes Entrepreneurs Need To Redefine What Success Means To Them

"When I talk to these entrepreneurs, I ask them, 'Why are you doing what you do?' And they [often] say that they they're doing it to make money, and they're all already planning an exit strategy before they even start a business. That kind of attitude is doomed to fail, in my opinion."

For someone who has been described often as a guru, be it for meditation, self-help, or even the so-called "New Age," I was surprised to find out that Deepak Chopra has once said that he actually doesn't consider himself that. In an interview with The Guardian in 2014, Chopra said that it was the media that labeled him a guru, adding that he just shares his ideas with people, and that "there seems to be a resonance."

Given his stated disinclination towards being characterized a guru, one of the first things I asked Chopra when I got to meet with him during his visit to the UAE in November last year was, well, to introduce himself: who is Deepak Chopra? In response, Chopra pauses to think, looking away for a moment, and then stares me in the eye, and says, in his characteristic, soothing voice, "To define somebody is to label them, and confine them, and box them in. I'm reminded, as you ask, of a poem from Rumi. He said, 'Define me, label me, nail me down in a box with cold words... That box will be your coffin.' So, I don't know who I am. I'm your own voice echoing off the walls of God. In other words, who I am is what you see; that's it."

Chopra's response is characteristic of the philosophies that he has espoused over the course of his illustrious career, which has seen him author more than 90 books, while also launching a non-profit called The Chopra Foundation, as well as "a modern-day health company" called Chopra Global. Chopra is today 76 years old, and yet, he doesn't seem to be showing any signs of slowing down what he does on a day-to-day basis, and as such, he continues to be at the forefront of global discussions centered on integrative medicine and personal transformation.

So, when I asked Chopra about what is it that gets him to wake up every morning and do what he does each day, Chopra smiles and replies, "Mainly, I do it for fun. So, I ask myself: is this going to be fun? That's number one. Number two: am I hanging out with people who are fun to be with? Because, these days, we need a team to do anything effective. And third is: is it helping [someone]? Is it alleviating some kind of mental, emotional, physical distress? That's it. If those three things are there, I'm on. Otherwise, I'm not available."

Chopra's ethos about how he goes about his daily work comes across as a stark departure from the tenets that govern most people in the entrepreneurial sphere today, and he acknowledges this, given that he meets with a lot of young entrepreneurs, especially from Silicon Valley, who are young and intoxicated with their ideas. But Chopra points out that most of these startups often go on to not last that long, and the reason for that, he says, is because they have gotten on this journey they are on with the wrong intentions in mind. "When I talk to these entrepreneurs, I ask them, 'Why are you doing what you do?'" Chopra says. "And they [often] say that they they're doing it to make money, and they're all already planning an exit strategy before they even start a business. That kind of attitude is doomed to fail, in my opinion."

According to Chopra, entrepreneurs need to reconsider what success actually means for themselves and their enterprises. "You have to define success," he says. "Success is the progressive realization of worthy goals, it is the ability to love and have compassion, but it is also true self-esteem. However, people these days have sacrificed their selves for their selfies. Your self is a field of possibilities. Your self is creative. Your self has amazing imagination. Your self understands synchronicity. Your self understands the value of focused awareness. But none of these things come into entrepreneurship. People are only thinking about the end result."

But then, what exactly should entrepreneurs be working toward? "When I wrote my book Abundance: The Inner Path To Wealth, it was actually inspired by Bob Marley. In one of his lyrics, he said, "Some people are so poor, all they have is money." Many people confuse their net worth with their self-worth. So, don't do that. If you want to be successful, know your self-worth, which is more important, and then, your net worth will follow." 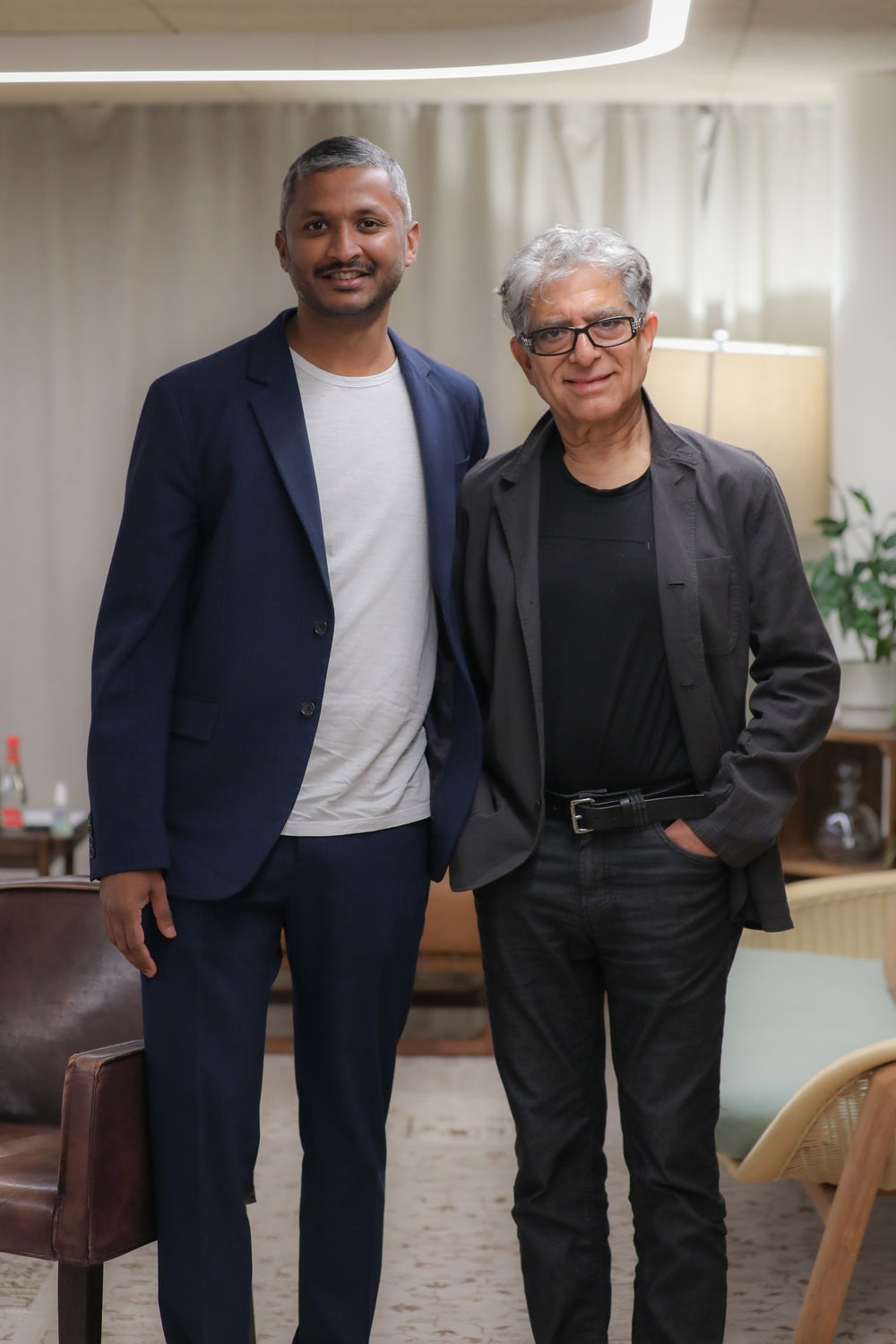 "If I was giving advice to entrepreneurs, I'd say, ask yourself the following questions," Chopra continues. "Number one: is there a need for what I'm offering, what I'm creating, be it a service, product, or what have you? Number two, am I an expert in fulfilling that need? Do I know everything about it? Do I have all the knowledge, all the information to execute it? That's number two. Number three is, am I replaceable? Because if you're replaceable, then, well, anybody can do it. So, what you're offering has to be so unique that it can't be replaced right now... And in order to be a pioneer, you've got to be listening to the collective conversation that's happening [in your domain]. So, right now, in my field, the collective conversation is well-being. Is there a need? Sure, for mental and physical well-being. Do I have the expertise? I've spent 45 years doing that. And am I irreplaceable? I'd like to think that, at this moment, I'm not. Maybe 10 years from now, yes, because everything has a lifespan, and everyone is replaceable. But at this moment, what I'm doing is so unique that there's no one else who comes close. I feel confident saying I can do all three criteria."

Chopra has been certainly moving ahead with some ambitious initiatives of his own lately- one of these has been the ChopraVerse, which has been described as "a metaverse for wellbeing" that is being built as a collaboration between The Chopra Foundation and SEVA.LOVE, a Web3 platform also co-founded by Chopra, and Utopia, a Web3 ecosystem focused on bridging the physical and digital worlds that has the backing of Alejandro Saez, Maria Bravo, Eva Longoria, and Javier Garcia.

While it has several different aspects to it, a key feature about the ChopraVerse is that it's the site for the House of Enlightenment, an immer- sive virtual reality and web-based experience that has been pegged as Chopra's personal home in the metaverse. In a statement, Chopra said that the "ChopraVerse is creating homes for multidimensional living, nourishing the body, mind, spirit and environment as a unified experience in awareness."

Now, the ChopraVerse is just one of the many, many things that Chopra has got under his belt for 2023 and beyond, and if one is to look for a common thread connecting all of what he is getting up to, it becomes easily apparent that his goals today are global in nature. "I'm focused on a more peaceful, just, sustainable, healthier, and joyful world, reaching a billion people," Chopra declares. "I have offered the services of our foundation for conflict resolution in places where there is conflict and distress- not by taking sides, but by offering real solutions, which lead to economic prosperity and peace. Peace and prosperity go at the same time, unless you're making drones, or weapons of mass destruction, or something that's a killing machine- [in that case,] you'll make a lot of money, [and, yes,] a few people are making money. But otherwise, in general, peace, prosperity, and progress go together... That's my vision right now. A more peaceful, just, sustainable, healthier, joyful world."

Related: Exclusive: Deepak Chopra On Elon Musk's Staffing Cuts At Twitter: "Maybe For Every 1,000 People, You Only Need A 100"