By Dipen Pradhan
June 1, 2019
Opinions expressed by Entrepreneur contributors are their own.
You're reading Entrepreneur Asia Pacific, an international franchise of Entrepreneur Media.

Impact investments can play a significant role in the upliftment of socio-economic lives for billions of people living in the Asia Pacific region. A report published last year highlights that impact investment assets globally represent only 0.2 per cent of the global wealth, according to the Global Impact Investing Network (GIIN); but by way of increasing this share to just two per cent, its potential can reach over US$2 trillion, says UNDP.

The company on 31 May issued a statement on the launch stating that the fund will primarily focus on companies from South Asia, Southeast Asia, and China that have the potential to create measurable impact on society, economy and the environment using technology—and generate a positive RoI.

The company is yet to announce the corpus amount allocated for the fund. It is being supported by Temasek Trust and Temasek, along with US-and Singapore-focused venture capital firm, Pavilion Capital. ABC World Asia is primarily looking out for companies working towards making an impact in areas such as financial and digital inclusion, better health and education, climate and water solutions, sustainable food and agriculture, and smart and livable cities.

According to Kuan, the initiative is built on the ideals of United Nations' 17 Sustainable Development Goals (SDGs). The fresh initiative also complements Temasek's ABC framework that stands for an active economy, a beautiful society and a clean earth.

Launched in 1974, Temasek now has offices spread across 11 countries, with S$308 billion (US$224 billion) portfolio, as on 31 March 2018, according to its website. As per data sourced from Crunchbase, overall, the company has invested in over 197 companies from around the world. It established the Temasek Trust in 2007 that provides governance and financial oversight.

Temasek's portfolio covers a broad spectrum of sectors —from telecommunications, media, fintech, transportation to consumer services, real estate, agriculture, and energy. As part of its impact investing, Temasek along with other investors had invested US$40 million Series D funding on a clean-tech startup, Calysta Energy, in May 2018.

The US-headquartered Calysta, which also has offices in Singapore and the UK, is into producing nutritional feeds and animal health products. It uses biological technologies that converts methane gas into edible, natural proteins as a sustainable food source for fish, livestock and pets. Temasek has also invested in the venture capital firm, TPG Rise Fund, which focuses its investments entirely on impact-making startups.

"With the impact investing industry still in its infancy, particularly in Asia, we are excited by the prospect of establishing impact investing as a critical lever for sustainability," the statement cited the CEO of ABC World Asia, David Heng, as saying.

According to a survey published last year in January by researchers from the National University of Singapore and Japan's Sasakawa Peace Foundation, impact investment trends, especially in Singapore and Hong Kong, has witnessed "heightened interest" due to the presence of more impact investment managers and intermediaries in the region. It notes that this interest is being driven particularly by the millennials, personal values and passions. 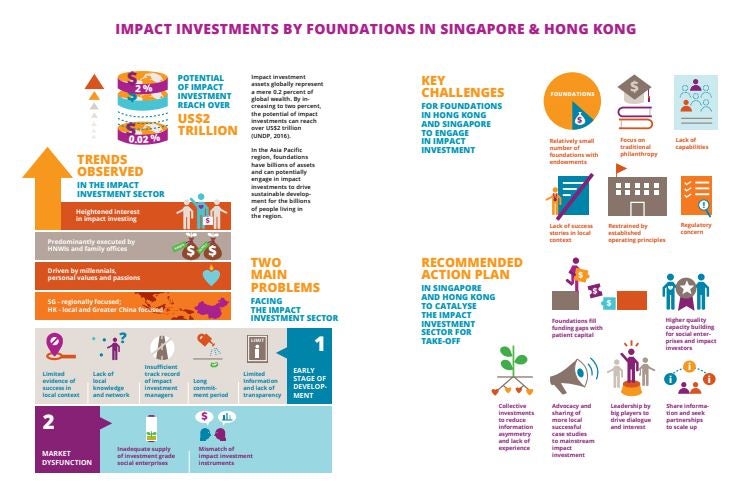 The same study also points out the sector facing challenges such as lack of local knowledge and network among impact investment managers. It notes that there is limited evidence of success in impact investment in the local context as compared with case studies of successful impact investments that originate from the US and other European countries.