Grab, GoTo, and Sea: Who Has the Formula For Superapp Supremacy in Southeast Asia?

The fascinating question isn't simply who will win, but how. Grab, GoTo and Sea have forged different routes toward owning the app cluster that rules them all

By Vinnie Lauria
May 31, 2021
Opinions expressed by Entrepreneur contributors are their own.
You're reading Entrepreneur Asia Pacific, an international franchise of Entrepreneur Media.

A good bit of media attention has focused on the race in Southeast Asia between Grab and GoTo—two IPO-bound decacorns with roots in ridesharing. But what's really afoot is a three-way battle royal to see whose superapp play will prevail in some of the world's top emerging economies.

Both Grab and GoTo have evolved beyond rides and food delivery. Each is building its future around a new core: a payment app, which can be a gateway to selling all sorts of products in the mobile-friendly, 10-country ASEAN region. And both face a formidable third rival, Singapore-based Sea Limited.

The fascinating question isn't simply who will win, but how. Grab, GoTo and Sea have forged different routes toward owning the app cluster that rules them all. Let's quickly profile the companies, then see how each stacks up in five key strategic areas.

GoTo is a recent merger of Gojek, named for the ojek (motorbike) drivers who are its street-level soldiers, and ecommerce platform Tokopedia. Key strengths: GoTo has by far the widest variety of products. Its home country is Indonesia, by far the largest ASEAN nation, with over 270 million people. Key weakness: GoTo doesn't have much presence outside Indonesia—and must defend its home turf against eager intruders. (Disclosure: Golden Gate Ventures is a small shareholder of Gojek via its acquisition of Ruma Mapan. We've also invested in Gojek's spinout, GoPlay.)

In this superapp contest there are four critical areas of business competition: rides and deliveries, entertainment, ecommerce, and the payment app. A fifth "intangible" area is strategically valuable overall: having a founder/CEO in place for sustained leadership and vision. Here's why each factor is important and how I would rank Grab, GoTo, and Sea on each count. I've used a simple scoring system in which 1 = fully loaded and ready, 0 = not at all, and anything in between gets 0.5.

While ridesharing alone may not be profitable, fleets of vehicles on the streets pay off in several ways. Ridesharing becomes a loss leader to grow the user base. Food delivery generates profits and builds networks of merchants who accept the company's payment app. Together, these activities create real-world brand awareness, as people literally see the company in action.

Grab: 1 point. The company's affiliated taxi and motorbike drivers get the job done in hundreds of far-flung metros.

GoTo: another 1. Gojek's state-of-the-art fleet services (now also including four-wheel vehicles) have wide penetration, although mainly at present in Indonesia.

Sea: 0. No ridesharing, and only launched food delivery last quarter, far behind its rivals

As Yinglan Tan of Insignia Ventures Partners told Wiredfocus last year, tech platform companies "need a plan for users to stay engaged on the platform for the long term." This is what streaming entertainment does. It is an attention-getter and attention-keeper, producing revenue itself and drawing people to put your company on their screens.

Sea: 1 — Sea's Garena is a clear winner, because in online entertainment, gaming rules. It's the first app that many young people install on their phones. Gaming is highly social and interactive, which helps to hold attention, and it's a profitable business with high entry barriers.

GoTo: 0.5 — GoTo's GoPlay entertainment unit streams Asian feature films and video series. These are popular, too, but there's plenty of competition. To carve a unique niche, the company now produces GoPlay Originals, such as a remake of the American series Gossip Girl set in Jakarta. They've also launched a livestreaming service that's popular with young people. This is formidabile, but I've given a half-point as GoPlay's content is Indonesia-centric while Garena's has ASEAN-wide appeal.

Grab: 0 — A few years ago Grab ventured into films and series by partnering with the Asian distributor Hooq, but Hooq went bankrupt. Currently Grab has no entertainment.

Sea: 1 — Sea's ecommerce unit, Shopee, has an ASEAN-wide footprint and drew more site visits than Tokopedia last year in Indonesia, the latter's home country. Any list of the top ASEAN ecommerce players must include Shopee.

GoTo: 0.5 — Tokopedia brings a strong platform to this merger. A well-supported merchant network offers a wide variety of goods, and GMV (gross merchandise volume) keeps growing. But with more than 5 unicorns clamoring for the top spot in Indonesia, the platform's home-country focus becomes a vulnerability: If Tokopedia should lose the domestic battle, its prospects are grim.

As Alipay's success in China has shown, owning a widely used payment app confers three huge benefits. The app is a fee-based revenue producer, a hub for selling financial products (as Ant Financial has done)—and, the app is a golden source of data on customers who use it. This data can be analyzed to target future marketing, to judge customers' spending power, and even to shape strategic ventures into new product lines and partnerships.

Grab: 0.5 — GrabPay is strong and increasingly popular across Southeast Asia. Grab also has been willing to partner with local players like OVO in Indonesia and Moca in Vietnam for maximum exposure. However, this is an Achilles heel when it comes to owning the customer and using the data to sell more services. To dominate, Grab will need to acquire local payment companies.

GoTo: 0.5 — GoPay is increasingly popular as well, accepted by merchants large and small. However it's hard to see GoPay becoming the payment method of choice in markets outside Indonesia. And the merger with Tokopedia may prevent outside merchants giving away access to purchase history.

Sea: minus 0.5! — SeaMoney works fine for Garena gamers and shoppers on Shopee. The trouble is, Sea's lack of a rides-and-delivery infrastructure severely limits the chances to build a wider user base for the app—or a wide network of accepting merchants. This shortcoming could have so many negative ripple effects that we've got to penalize Sea.

Rarely can tech startups grow large simply by scaling up their original products and business models. They must innovate and evolve, and there is value in having the founder (or one of them) continue to lead the company through these phases of development. At Alibaba, Jack Ma kept the entrepreneurial vision and culture alive. Apple thrived early under Steve Jobs, faltered when he left, and fired up again when he returned. Amazon, Facebook, Airbnb, Microsoft, Intel—all had sustained leadership from key founders. Ideally, handoff to a new leader happens only after the company is solidly positioned.

Nobody is solidly positioned yet in the ASEAN superapp war. There's a lot of innovating to come. Companies led by a founder/CEO could enjoy an intangible but significant edge.

Grab: 1 — Anthony Tan conceived this startup as an MBA student at Harvard and has led it smartly ever since.

Sea: 1 — Forrest Li took over Garena when it was young, built the rest of Sea around it, and he's still at the helm.

GoTo: 0.5 — Gojek lead founder Nadiem Makarim is now Indonesia's Minister of Education and Culture. Tokopedia's principal cofounders will not lead the merged GoTo, either. The merger creates a powerful new entity but also creates the complexities of integrating two big companies, which means a lot on the plate for the leadership team. However some cofounders are still on board to drive the vision. And there's a dream team of Gojek's former CEO and Tokopedia's former President, Andre Soelistyo and Patrick Cao respectively, who have two decades of knowledge on what makes for successful Indonesian business. 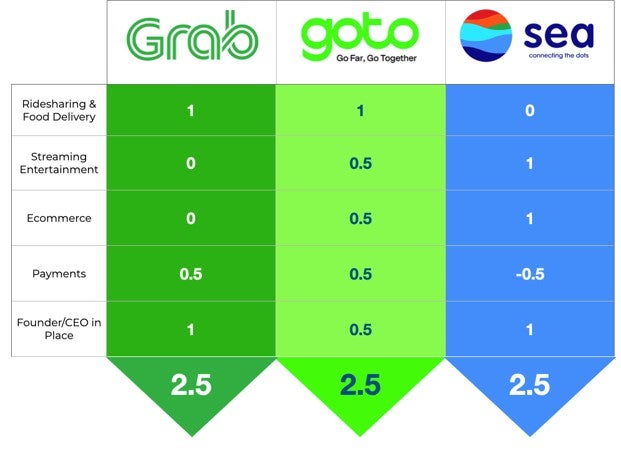 So far, the race looks even, but I see a possible edge. In my reading, Grab's strength comes down to payments and regional expansion while Sea's is in sticky entertainment and ecommerce. GoTo's strength is Indonesia and they're gearing up for an all out-battle. As a VC, a favorite type of company is one with its back against the wall, fighting to survive. GoTo is that fighter.

Southeast Asia is big and growing. There's room for more than one winner—and also room for plenty of strategic moves by all parties, which could range from acquisitions galore to a potential mega-merger. One thing to count on, regardless: Watching how this battle royal plays out could tell us much about the future of superapp platform companies in other markets.