Many Indian cities and towns including Jaipur, Thiruvananthapuram, Kanpur, Ahmedabad, Bhubaneswar, Vishakapatnam, Chandigarh, Kolkata are on their way to become prominent startup hubs

By S Shanthi
January 16, 2023
Opinions expressed by Entrepreneur contributors are their own.
You're reading Entrepreneur India, an international franchise of Entrepreneur Media.

India has more than 80, 000 startups. However, only Delhi NCR, Mumbai and Bangalore have acted as key startup hubs for many years. Later, Hyderabad, Chennai, Pune and Kochi also joined the bandwagon.

Today, many Indian cities and towns including Thiruvananthapuram , Jaipur, Kanpur, Ahmedabad, Bhubaneswar, Vishakapatnam, Chandigarh, Kolkata and others are rising through the ranks to become prominent startup hubs. Around 38,500 recognised startups in India today are from non-metro regions. 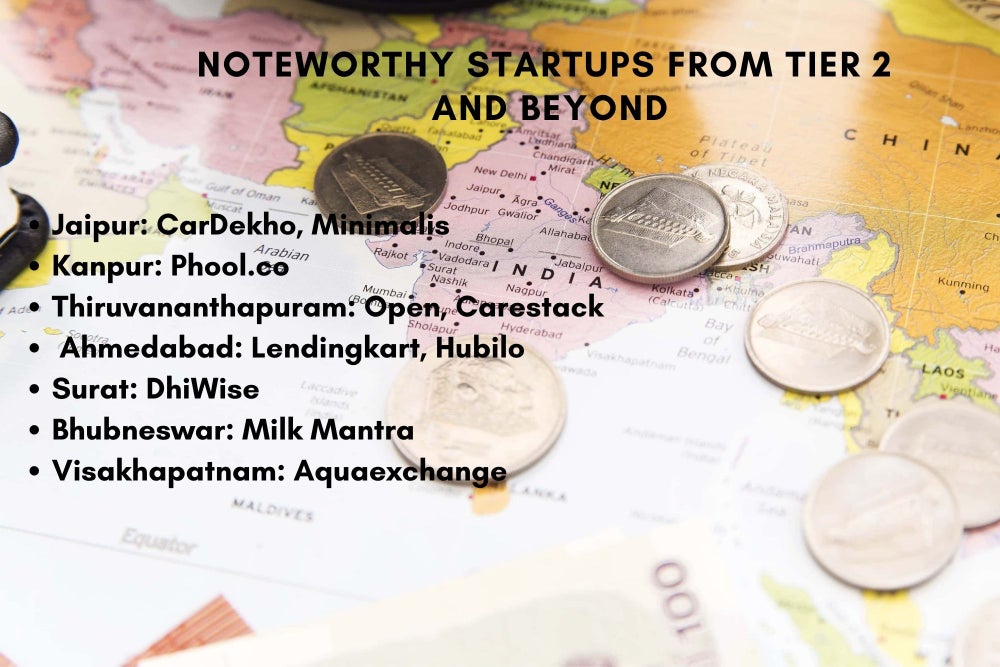 Every state government is taking efforts toward building multiple startup hubs across the state. For instance, Rajasthan has more than 3,000 registered startups, 10+ incubation centers, and a state-wide iStart Rajasthan program.

In fact, a city that has surprised everyone in the startup ecosystem is Jaipur. It is home to the Bhamashah Techno Hub, one of India's biggest incubators with a capacity to incubate almost 700 startups and is being looked at as one of the promising locations in the country for startups.

Another promising city, according to analysts, is Thiruvananthapuram. Of the total Venture Capital (VC) deals in Kerala last year, 62 per cent of companies were based in Thiruvananthapuram, say media reports. Ahmedabad too is emerging as a favorable startup city. Since it has traditionally had many textile mills and many businesses are skilled in manufacturing, it has led to an increase in e-commerce activities and the rise of renewable energy startups.

What's bringing about this change

One of the critical factors that have led to this phenomenon is the pandemic. The shift which was anyway happening, albeit slowly, got expedited by COVID. In the last two years, many city dwellers started operating from their hometowns, which necessarily were not tier I cities. "This has enabled the culture of entrepreneurial aspirations down to the tier II cities and beyond. So today, you would have noticed that business opportunities from a city like Darbhanga, Bihar also got featured in Shark Tank (though this had nothing to do with the reverse migration). With digital media exploding thanks to the low cost of the Internet in India, the outreach and aspirations also play a major role," said Brijesh Damodaran, co-founder and chief investment officer, Auxano Capital.

Startup policies rolled out by state and local governments and the mushrooming incubators culture have also encouraged many entrepreneurs from beyond metros. For instance, the Atal incubation network in many cities is giving a head start to young entrepreneurs. "State governments are providing a host of allied support like stipend, low-cost office space, procurement which helps startups make their businesses viable. Even colleges in small towns are fostering startups and are increasingly inviting industry leaders to their campuses to interact with young minds. These factors are helping VCs like us explore new shores," said Anil Joshi, Managing Partner, Unicorn India Ventures.

Most startups in India are looking to solve problems for Bharat, as that is where India's future lies. Founders from tier II III cities are leading this pack as they have a better understanding of the same.

Moreover, today there is also an increased awareness of the VC ecosystem in tier II and beyond due to IPOs of primarily VC-funded companies. "Primetime news, business publications, and even television reality shows have helped. Investors are also showing more acceptance towards investing in startups from regional hubs. They are helping them scale at a pan-India level because they solve problems affecting the masses," said Pittie. 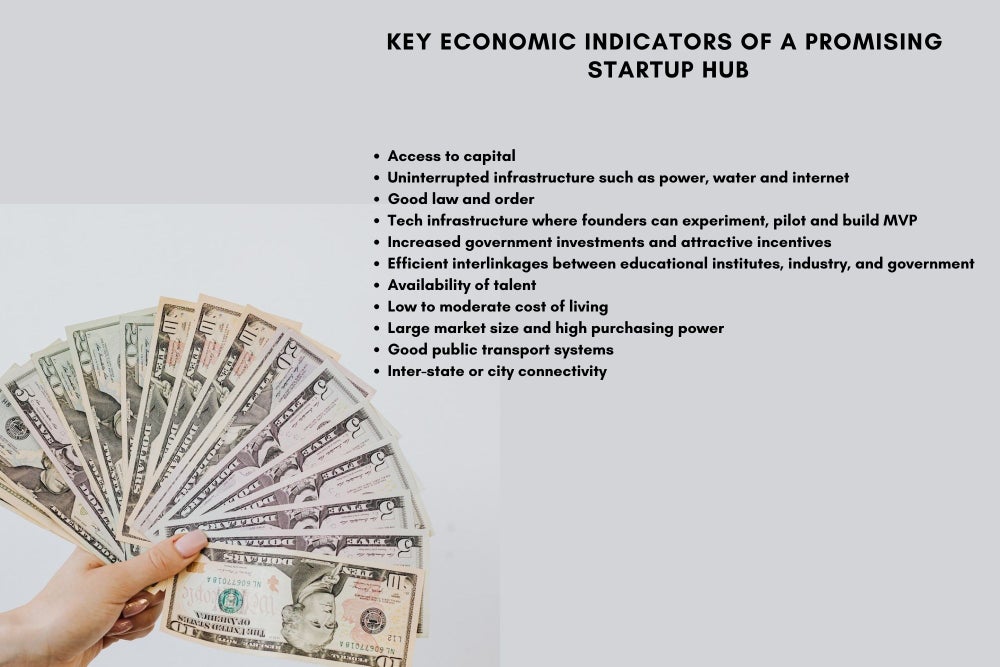 We are also seeing a lot of investors from smaller cities such as Guwahati, Kanpur, Vadodara, Raipur, Visakhapatnam, Agra, Jaipur, and Chandigarh who are increasingly ready to bet on innovative business ideas. They have also played a key role in encouraging startups from smaller cities and towns.

"These investors' presence helps create a more conducive environment for startups in smaller cities and towns to grow and succeed. They play an essential role in promoting entrepreneurship and economic development in the region by providing access to capital, offering mentorship and guidance, connecting founderst to networks and encouraging innovation," said Deepak Tuli, co-founder and COO, Eka Care.

Investors who invest in these startups are also often from the same cities and are generally the 2nd or 3rd generation of well-established business families from those cities. Therefore, they believe in encouraging local entrepreneurs to solve local problems, which then can be scaled globally.

"They provide smart money, which reduces the time to product market fit and shrinks the go-to-market map. Investors from smaller cities encourage local founders to address problems close to home. Being on the cap table provides institutional investors confidence in future rounds and startups access to capital that otherwise would not have been available due to a lack of brand discovery," said Pittie.

These next-generation investors also want to stay involved in the growth process as they realize that innovation is key to being competitive. "We have seen lots of family offices from varied backgrounds such as mining and manufacturing investing in startups. So, be it a strategic investment or otherwise, investors from smaller cities are becoming active and this is good for the entire ecosystem," said Ajay Jain, founder and managing partner, Silverneedle Ventures. The firm has earmarked places such as Indore, Ahmedabad and Kanpur, from where they are keen to evaluate deals.

It is also a known fact that India's smaller towns have many HNIs and UHNIs. For years, however, the lack of knowledge and confidence in this asset class was a challenge, which is slowly changing. "With growing media exposure this is being addressed. The local HNI can certainly help with the much-needed seed capital. Sharing their wisdom during the early days will also help local startups grow in a structured manner," said Joshi.

"HNIs and UHNIs provide the much-needed initial mentoring, support, connects and funding that makes the startups ready for larger rounds. They also act as the ambassador for these startups in their network spread across the world," added a spokesperson from Chennai Angels.

Analysts say that the challenge these startups face is mainly of access - be it to the right talent or mentor pool, the funds or the market. Even though things have changed to a great extent, the opportunities founders from smaller towns get are still lesser than metros.

"They also face issues of not being in an environment that encourages innovation or sharing their issues with others in a similar boat. Things are changing, but digitally they can be made to change faster," said Jain.

Communication skills have been observed to be one of the challenges faced by the founders from tier II and beyond. "This can be overcome with a lot more interaction and mock sessions on the art of pitching. To an extent, the Indian edition of Shark Tank, is reducing the gap and making the founders believe in their product and themselves, which is the key factor," said Damodaran.

Marketing and brand discovery are also difficult tasks. "Accessing a pan-India audience from less recognized regional hubs can be challenging from a customer acceptance and investor confidence perspective," said Pittie.

Further, they also face operating challenges such as high logistics costs, lack of warehousing facilities and power shortages. "These challenges at the initial stages sometimes become a roadblock to attracting institutional investors in later rounds, where growth capital is essential for the business to thrive," added Pittie.

Also, metros have a vast network of startup founders, investors and mentors, who often have many meetings and get-togethers during weekends. Budding startup founders in these cities use these events as an opportunity to learn and build their businesses, something that small towns and cities still lack. Lastly, even though the internet and communication infrastructure have considerably improved, it is still a long way to go.

What more should state governments do?

Last year, the Tamil Nadu government allotted about INR 50 Cr to the Emerging Sector Seed Fund to make equity investments in state-based startups and also leverage capital from institutional investors. Similarly many other state governments are also taking progressive steps towards building a startup hub, not just in state capitals, but beyond that.

So, what is lacking and what needs to be done?

"Almost all state governments have a startup policy in place and they are also launching a host of other initiatives along with small funding access to support local startups. However, access to VC investors is big challenge for many startups. An initiative by local bodies allowing regular interaction with investors will certainly help in further strengthening the vibrant ecosystem," said Joshi.

Experts also point out a gap between policy and implementation and that founders often do not know how to leverage these initiatives. "Today, state governments are very supportive of startups. However, there is always more that can be done. While programs focus on investment to startups registered with the state, it is important to have programs to attract startups/companies from other states to set up operations in their states. This will create local jobs. Thye should also attract large angel /early-stage investors to the state by supporting them operationally with their expenses," said Padmaja Ruparel, co-founder, IAN and founding partner, IAN Fund.

Experts feel that allocating capital is not enough. "Today, we all agree that access to capital in the early stage is not the biggest issue. There are so many platforms from which funds can be raised. But one needs to be critical of this - money is only one part of the problem, mentorship & right guidance is very important," said Jain.

The need of the hour thus is guidance, mentorship and a good infrastructure and support system in place.