Apple is set to roll out its new iPhone and MacBook model. The first ARM-based MacBook by Apple might be one of the most affordable laptops to date

A new Macbook is soon going to hit the market and Apple's users can be all happy. Not only Apple has added some surprise upgrades in the model but it will also be their first ARM-based laptops. Apple on Friday released a public beta version of next MacOS which will support ARM and Intel.

The news comes as a surprise for the majority of Mac users who for the first time will be using MacOS11. But how? While the ARM MacBook or Mac is still not launched in the market, one can still try their hands on it. Developers can apply a Developer transition Kit which comes with an ARM-powered Mac mini and gets going.

Information by Apple leaker iHacktu Pro and Apple Insider, states that Apple will be unveiling the latest 12-inch MacBook on October 27 at the iPhone 12 launch event. As per reports, the MacBook is packed With a 5nm 12-core CPU and might be one of the cheapest models by the company to date.

Earlier a tweet by tipster komiya confirms that Apple's 12-inch MacBook will start at $799 ($200 cheaper than the current entry-level MacBook Air). They will also be releasing MacBook Pro 13 running which will cost around $1,099. The laptop will come with its ARM chipsets, Touch Bar, and also a cooling fan. 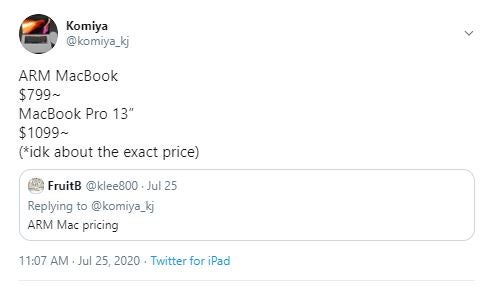 A lot of Mac owners will be pleased to know that MacOS 11 will be supporting systems that of 2013. Last week we even saw a battery leak pictures of 4380 mAh capacity that pretty much is similar to the size used in the current MacBook Air. The Korean certification that shared the image of the same and anyone who is an Apple Geekerati would be well aware of this news.

Apple has just six months ago launched MacBook air with specification upgrades. One thing is for sure the team wouldn't launch a device unless it is changing the dynamics of the current devices. With MacBook Air, Apple gave consumers something light and power-packed to carry. One can hope that the switch from Intel to ARM is pretty much the same. Also, let's hope price drop doesn't come at the cost of performance getting hampered which is still to be tested.