20-Something Entrepreneur Multiplies Success in a Salad Franchise

By Jason Daley
November 16, 2011
This story appears in the November 2011 issue of Entrepreneur. Subscribe »

It may seem like mall rats run on nothing but Cinnabon, but one day while hanging out at the Cherry Hill Mall near his home in New Jersey, an adolescent Josh Burton skipped the Fryolator and took a chance on Saladworks, a new quick-serve salad bar in the food court. After that first bowl, he was hooked--not only on the fresh veggies, but on the company.

"Eating that greasy food at the mall made me feel sluggish, but I felt energy after eating at Saladworks," he says. "I kind of followed the business throughout my high school years. When I went to college I majored in business and always knew I wanted to own my own store. My mind kept going back to the Saladworks concept."

After graduation, Burton worked at Pepsi and in real estate while saving up enough money to buy into the franchise. In 2007, when he was 25, Burton bought an underperforming Saladworks in suburban New Jersey. In 2008, he launched a new location in Bear, Del., and another in a mall in Trumbull, Conn. 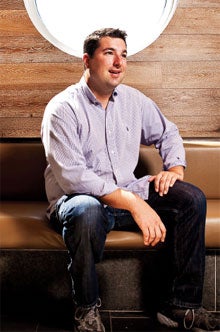 What issues do you face having stores in multiple states?
It can be a challenge. You can never physically be in two places at once--it doesn't matter if your stores are 20 or 200 miles apart. You have to trust your staff and hire good general managers who you know are going to carry out your core values. The big problem is emergencies. It's easy to run and make a repair or fill in for a sick manager when a store is five miles away, but more difficult when it's a 200-mile drive.

You opened Saladworks' first "3G" franchise in 2008. Does layout really matter?
I paid a little bit more for it, but I think it was worth it for having such a nice store and staying ahead of the curve. It's got clean lines, wood floors, vibrant colors and an improved customer flow. In the old store, the soup station is after the cash register, so you have to notice it when you're paying and ask for soup. In the new design, the soup is right after the salad case and before the register. For that simple reason, the 3G store sells more soup than my other locations. We rolled it out on Black Friday 2008, and it's made money from day one.

What were your biggest mistakes starting out?
In the beginning, I scheduled way more people than we needed and learned that our labor costs were out of line with store averages. I had to learn to maximize the schedule based on peak lunch and dinner hours. Those first six months definitely had a big learning curve, but opening new stores gets easier and easier.

Do you plan to expand to more states?
I think I'd like to keep it closer to home. There's better brand awareness in our core market. The outer markets are viable, but what I've learned is you need to open three or four stores at once and use that small core to create awareness. You need commodities of scale with marketing and branding. I was spoiled because my store in Delaware was so successful. But my store in Connecticut, where Saladworks didn't have a presence, took a lot more time and capital to establish.

What do you instill in your employees?
We try to offer the best service possible. It's like buying a luxury car--we offer a premium product and charge a higher price. Because of that, customers demand a higher level of service, and that's the most important thing we do.