After Fleeing Iran, This Entrepreneur Is Living the American Dream

By Lydia Belanger
June 8, 2017
This story appears in the June 2017 issue of Entrepreneur. Subscribe »

You never know whom you'll find behind the counter at Checkers. Take Nick Nasrollahi, a part-owner of seven locations. He fled his home country of Iran in 1985, when he was 18 -- making a seven-day journey across the mountainous desert on foot, by camel and eventually in the back of a sympathetic smuggler's pickup truck. He almost didn't make it. A group of soldiers detained him on day three and took his money. On day six, they left him in an underground bunker with nothing to eat but a rotten orange. The smuggler got him out, though, and by donning a woman's burqa that completely covered him, Nasrollahi snuck past Pakistani border guards. He sought asylum in Pakistan and soon made it to the U.S., where he built a career in the quick-service-restaurant industry. Nasrollahi spent 20 years at Jack in the Box, holding 11 different positions in Los Angeles and Las Vegas before looking into franchising himself in 2007.

When you got to the U.S., you tried both pro soccer and computer science. How did you wind up in quick-service food?
I was a competitive soccer player in Iran. I tried out for professional indoor soccer here, but the money wasn't great. I was working as an assistant at Jack in the Box and studying computer science. My manager said, "You have a lot of potential, and if you switch to business management, you're going to make a lot more." The industry was, for me, a pass-through. But plans don't always work out the way you thought they would. Sometimes they work out better.

Why Checkers and Rally's?
My business partner and I studied a lot of fast food, and Checkers and Rally's were the best fit. They had a better development model, were less expensive and had a smaller footprint. I was pleased with the management and executives of Checkers corporate. They've been very fair and transparent. Also, there were no Checkers locations in Las Vegas, so we didn't have any franchise restrictions as far as where we could build. 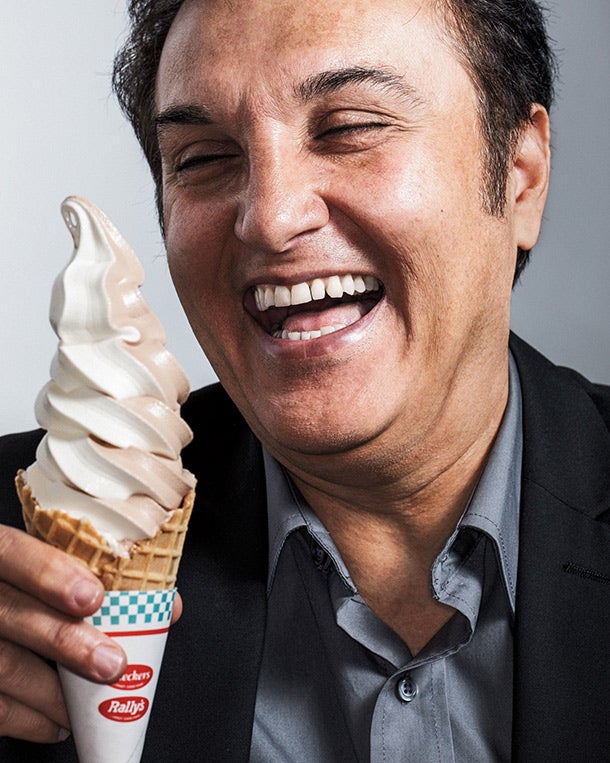 How did you familiarize Las Vegans with Checkers?
We advertised in local newspapers, did direct mailing and got involved with scholarship programs with a nearby high school. It was about getting in front of and joining the community, and serving great food at the right price.

In 2007, you agreed to open 20 locations. Ten years later, you have only seven. What happened?
Unfortunately, 2008 happened. The existence of small-business lending after Dodd-Frank was as real as a unicorn. We had to do self-funding for our first location and then pursue private equity to build the next six. Since 2009, when we opened our first unit, we've opened a location every year.

What's the growth plan now?
We're planning Rally's locations in Southern California, and more Checkers locations in Las Vegas, including some at fueling-station complexes and in Nevada casino markets. Hopefully a larger expansion in Nevada and Arizona will come after that. We're going to end up with way more than 20 locations.

How has your personal history influenced your business philosophy?
Accept that life brings many changes and many challenges. If you expect the unexpected, you get disappointed the least. But if you always think everything is going to be peachy keen, there is going be disappointment. You can imagine, after everything I've gone through in my life, when somebody says, "Oh my God, I've run out of product, I'm so stressed," you know I'm laughing inside.