Two Men and a Truck's Bumpy Road to Franchise Success

Brig and Jon Sorber are definitely mama's boys, at least when it comes to their moving franchise, Two Men and a Truck. During high school in the early 1980s, the brothers borrowed a 12-foot step van from their mother, Mary Ellen Sheets (she'd been using it in her spare time to buy furniture at auctions and estate sales). Once they had a set of wheels, they were able to do moves for small houses and apartments in the Lansing, Mich., area. But when they left for college, the brothers thought their days of wrestling couches were over.

Mama Sheets had other ideas. "She kept getting calls for jobs and asked if she could hire guys to keep the business going," says Brig Sorber, now CEO of the franchise. "And she did. We'd jump back on the trucks during Christmas and summer vacations. One summer we came home and there was a brand-new truck in the driveway. We thought, Uh-oh, there goes all our beer money." 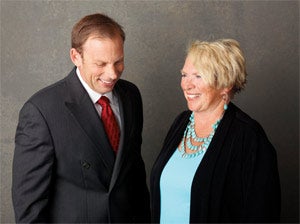 All in the family: Brig Sorber and his mother, Mary Ellen Sheets.
Photo courtesy of two men and a truck

In fact, that truck was their future. Over the next two decades, Sheets, who now serves on the board, and her boys built Two Men and a Truck into a 228-unit, nationwide franchise with more than 1,400 trucks. But unlike many successful franchises, which are created with franchising in mind from the start, the team behind Two Men and a Truck had to make the transition through trial and error.

John Cohen, co-founder and president of North Carolina-based Rhino 7 Franchise Development Corporation, isn't surprised. "What most small-business owners don't realize is that franchising is a separate business in and of itself," he says. "While they might be passionate about the space they're in, whether that's self-serve frozen yogurt or pet grooming, and they're good at managing staff and day-to-day responsibilities, they have to have a different skill set to franchise. It's like adopting a bunch of businesspeople and teaching them to do what it is you do. You have to be patient and very, very detail-oriented, a good trainer and a good systems person. Or you have to hire staff to help you with that."

Start Local
Sorber admits that he and his brother had no clue about franchising from the start. Their mother heard about franchising at a business conference, and she signed her sons and daughter up as her guinea pigs in the early 1990s. "We were not prepared at all for franchising," Sorber admits. "Absolutely everything went wrong."

For starters, they scattered their franchises across the map, opening locations in Georgia, Colorado and Michigan. Sorber says that they should have focused on filling in their home territory at first: "You want to be No. 1 in Detroit, then in the region, and then you can spread out. We learned that spending money on advertising is useless if it's spread all over the place."

It's a mistake Cohen has seen many wannabe franchises make. "It helps to become a small, regional chain first," he says. "Then you've proven that your success is not an anomaly, that you don't just have one good location that works. Specifically, if you can replicate the business in the next state over, your future franchisees are going to have that much more confidence that your success is not a fluke."

Build a System
"Another mistake we made was thinking anybody who wanted a franchise would be a good franchisee," Sorber says. "We had early franchisees who complained that our mission statement was wrong or that our uniforms sucked. Some people were full-blown entrepreneurs who couldn't live with our system. They eventually left or we got rid of them, but it was really difficult. We had to figure out the desirable attributes of our potential franchisees and tell some of them no. When we figured that out it was a big, big deal."

In short, the Sorbers figured out their "secret recipe"--the systematic codification of operations, customer service, marketing and product handling into operation manuals and training. Now when Sorber talks with would-be franchisors, he advises them to start this process sooner rather than later.

"I ask them a few questions," he says. "Can you write down your processes?

Every single step from when the customer calls to when they shake your hand and say, "Job well done.'

"I tell them to write everything down on a long roll of paper on their kitchen table," he adds. "Every step that has to happen--it will probably stretch across the table and into the kitchen. I have them take a look at every single one of those steps. Can you replicate them and make training materials out of them? Look at it and ask where you are tripping up. Where can you add something new to make this fun or easier to use?"

The Mission Statement
The transition from two men and a truck to Two Men and a Truck, the franchise, was far from smooth, and Sorber admits that as a franchisor he still makes mistakes. But he points to the creation of and adherence to a mission statement as the turning point for his company. "I know people roll their eyes and say that type of thing is BS. But it is not," he stresses. "When something goes wrong or there's a decision to be made, your mission statement has to be strong enough to help you say yes or no. A mission statement expresses the core values that tie franchisee and franchisor together. And that mission can't just be to make money."

For Sorber, that means looking at franchising in a somewhat different way than many in his industry do. "I would advise someone thinking about franchising to understand the role of the franchisor and the franchisee," he says. "It's a strategic partnership--the franchisees are not the franchisor's customers, like many people think. You're not out to make money off your franchisees. Our customers are the people we are out there moving. The money you make is a byproduct of the service you give to them."