March 19, 2008
Opinions expressed by Entrepreneur contributors are their own.

Michael DeFabio and his wife, Amy, were waiting for a miracle. The co-owners of the Natural Health Education Center say they were repeatedly refused funding for their holistic health care company. "We didn't have enough collateral," Michael says. "The banks strung us along for three months before turning us down."

After starting the Webster, New York-based company in 2005, DeFabio needed a boost in capital to get his latest product on the market. He took to the internet in hopes of finding a solution. After discovering the concept of social lending--also known as peer-to-peer (P2P) lending or Banking 2.0--DeFabio was drawn to P2P site Lending Club in November 2007. Within a matter of weeks, the 49-year-old naturopath physician fulfilled his loan request of $15,000, and was on his way to producing his B12 lozenge.

Thanks to the prevalence of websites like Prosper, Lending Club, Virgin Money, Zopa and GlobeFunder, P2P lending is becoming a viable financing option. When P2P lending first came onto the scene, it was primarily thought of as an alternative method for people unqualified for traditional bank or VC loans. Today, more and more qualified entrepreneurial borrowers are exploring P2P lending as a way to startup or grow their existing businesses. 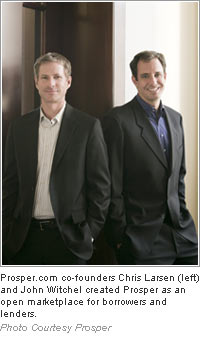 According to Prosper co-founder and CEO Chris Larsen, the economy is forcing many entrepreneurs to search for funding in non-traditional places. "I think the credit crunch is really in some ways a huge opportunity for us," Larsen says. "We've seen a pretty major jump in the percentage of well-qualified borrowers, who would usually have no problem getting bank loans in the past."

Lending Club CEO and founder Renaud Laplanche also saw a surge in entrepreneurs turning to his site. "Many loan requests specifically mention the 'credit crunch' or 'banks tightening their credit policy' as a reason for turning to social lending networks like Lending Club," Laplanche says.

Meet the Banking 2.0 Entrepreneurs
According to Larsen, most of the businesses using Prosper are startups. That's because most P2P sites--excluding Virgin Money--cap loan amounts around $25,000.

For Madeline Smith, 54, a $5,000 Prosper loan meant starting the pet boutique she always dreamed of. Smith's inspiration to start her home based business, Madeline Pet Clothier, came after successfully organizing a pet show in her community during the summer of 2007. She tried Prosper.com after a friend passed along the website. "I was skeptical at first," Smith admits. "But I figured, you never know if you don't try."

Smith pitched her business to the online Prosper community, and within weeks, received a $5,000 loan. "I even had one woman say [my company] is something she's always wanted to do, and she said, 'I will get to live my dreams through you.' And that was touching. I'll never forget that," Smith says.

Thankful for the warm welcome she received, Smith decided to become a lender herself several months later. "I want to keep it going and help another entrepreneur who needs a loan," she says. 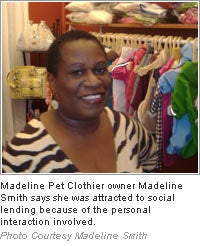 But not all small businesses joining online P2P communities are startups. In fact, some entrepreneurs are looking for extra funding to help them expand, or get them through a rough patch. That's why 35-year-old small-business owner Chayah Masters sought out funding on Zopa in January this year. The business owner of Los Angeles-based Gittel on the Go Inc.--a staffing agency for part-time assistants--found herself short on capital thanks to the Writer's Guild of America strike and the economic slow-down. While surfing the web, she came across Zopa, and asked for a $5,000 loan. Within days, she had cash in hand, and was able to pay off the cost of revising her company's website.

Masters plans on paying back her loan when she receives her company's tax return. "I recommend that entrepreneurs keep their feet firmly planted on the ground when considering taking out loans and how they'll be paid back," she advises.

For DeFabio, $15,000 was enough to give his company a sufficient boost. But in order for him to launch his next product, he'll need a larger loan than Lending Club is currently offering.

Do Your Homework
Self-made billionaire and business coach Bill Bartmann says he's borrowed more than $3 billion in past entrepreneurial ventures. Bartmann believes P2P websites may be the only loan opportunities for some small businesses as credit tightens. But before jumping into any agreements, Bartmann suggests entrepreneurs do their homework first.

"Research, research, research!" Bartmann says. "Check references of the principals, and check references provided on the site. Check with the Better Business Bureau and your state's Attorney General [in the] Consumer Protection Division. Last but not least, check other internet sites that report fraudulent or overpromised delivery."

For entrepreneurs like DeFabio, Smith and Masters, social lending has opened up a new world. "I would like to stay a part of [Prosper] as a lender, and maybe a borrower," Smith says. "Maybe I'll actually open that storefront that I'm dreaming of by next year."