4 Success Habits You Can Learn From Jeff Bezos, the World's Fourth Richest Person

A version of this story originally publised on July 29, 2016. This article was updated to reflect his latest place in the rankings.

“What’s dangerous is not to evolve,” Jeff Bezos once said in an interview. This declaration pretty much sums up why the CEO and founder of Amazon is a powerhouse of a leader and innovator.

But, let’s not gloss over the fact that alongside his phenomenal rise, Bezos, who also owns a private rocket ship company Blue Origin and The Washington Post, has acquired a reputation for being ruthless and having “ice water in his veins,” according to a less-than-flattering article describing a punishing work culture that ran in The New York Times last August,

The tech boss worth upwards of $69 billion, making him the world's fourth richest person, wrote a company memo in response to the story, reports Geekwire, part of which reads:

“The article doesn’t describe the Amazon I know or the caring Amazonians I work with every day. But if you know of any stories like those reported, I want you to escalate to HR. I strongly believe that anyone working in a company that really is like the one described in the NYT would be crazy to stay. I know I would leave such a company.”

In addition, his senior vice-president of global corporate affairs, Jay Carney published a blistering response on Medium, where he cited journalistic bias and questioned the credibility of some of the story's sources, including one who was fired for an attempt to defraud vendors.

"'Why weren't readers given that information?'" he wrote.

While the 52-year-old may have some tough qualities for some to swallow, he clearly embodies courage, innovation and big-picture thinking, all of which forged Amazon into the massive global online one-stop shop, reportedly worth $250 billion as of 2015.

Related: Data-Driven: What Amazon’s Jeff Bezos Taught Me About Running a Company

And it’s not just his businesses that evolve. Bezos is changing, too. It’s been through his acquisition of the flailing Washington Post, which he purchased for $250 million in 2013, Bezos has been able to show a different side.

When one of the newspaper’s reporters Jason Rezaian was released after being imprisoned in Iran for 18 months on charges of espionage, Bezos flew in his private jet to greet him. He then flew both Rezaian and his family to the Florida Keys at the freed reporter’s behest.

And Bezos hasn’t been afraid of employing his consistent business model of new ideas and expansion with the Post. Since his acquisition of the publication, it surpassed The New York Times in unique traffic last year for the first time and traffic has tripled since his takeover -- a fact largely attributed to his aggressive approach using technology and social media along with Bezos’s mandate to experiment, says The Wall Street Journal.

As Bezos continues to change and push boundaries, here are four other success tips that have put him at the top.

Related: 5 Things Jeff Bezos Does Other Than Work

Hard pivot toward the winning idea 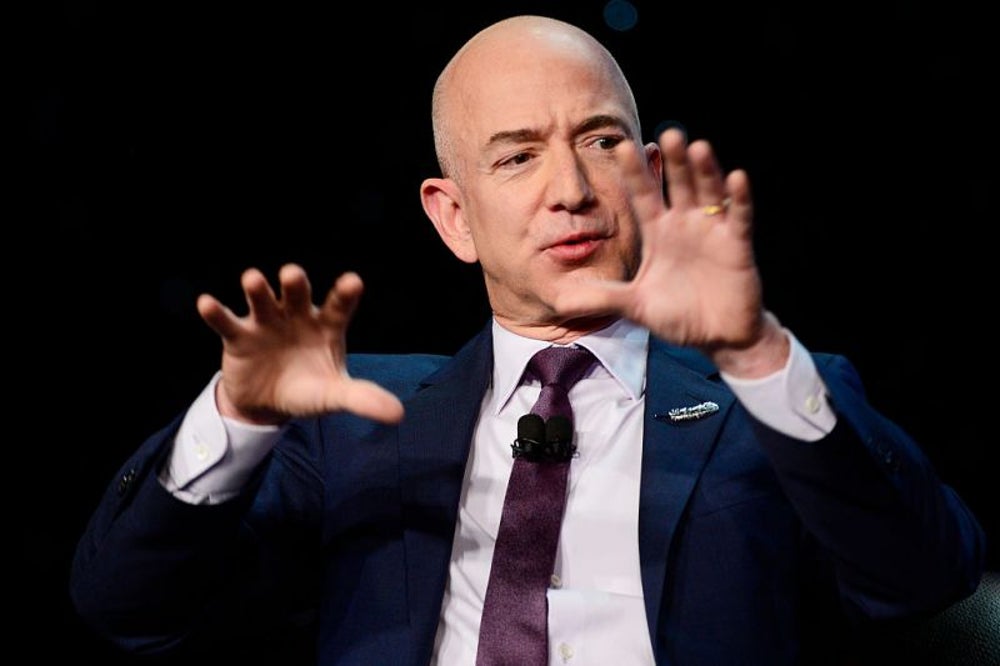 Bezos is a data-driven guy and a risk taker -- a powerful combination for decision making.

He did a hard pivot when he left his cushy job in 1994 as senior vice president of D.E. Shaw & Co., a successful hedge fund, to take a gamble and get into the space of e-commerce and books.

The Princeton grad first got the idea to start an internet enterprise in 1994, “after surfing the internet in search of new ventures for D.E. Shaw & Co. to invest in, he came across the statistic that World Wide Web usage was growing by 2,300 percent a month,” according to Entrepreneur.

Not one to shy away from opportunity, he recognized the possibilities of online sales and compiled a list of 20 possible products that might sell well on the internet; books were on the list, along with CDs and software.

Suffice it to say, he ran with books. It was so successful that at one point the growth of sales was outpacing his book supplies. Bezos had to purchase books from Barnes & Noble to keep up with orders.

Invest in the long term. 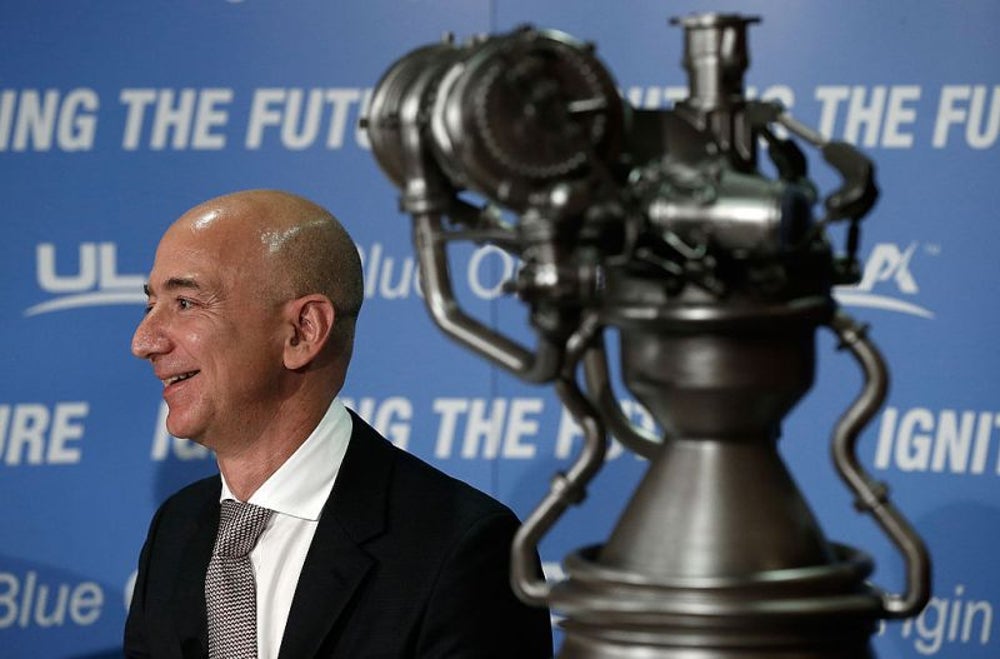 Bezos is a big picture guy. You have to be to invest in private space exploration.

He’s been an investor in Blue Origin for 16 years -- before space-exploration rival Elon Musk got into the mix with his SpaceX company -- and he funds it out of his own pocket to the cool tune of $500 million a year.

In June, Blue Origin successfully sent a reusable rocket booster to space and according to the company’s president, there are plans to begin taking reservations for passengers to travel into the earth’s orbit (something Elon Musk’s SpaceX had already done).

“We think we’ll start flying passengers in 2017,” says Rob Meyerson, the president of his space exploration company Blue Origin. “These will be test engineers. Then we’ll sell tickets. I imagine Jeff and I will fly in the 2018-ish time frame.

Make your own rules. 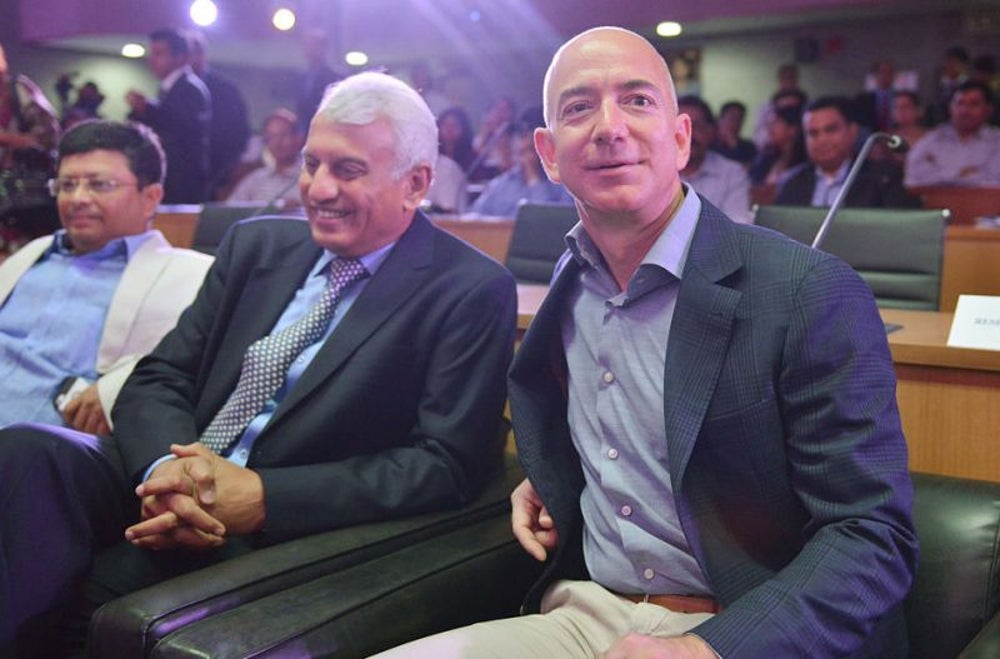 Bezos does not do PowerPoint. Instead, he has a more unconventional approach of how to pitch ideas at meetings and present them.

He requests that his employees write a four-to-six-page narrative before the meeting and distribute it to everyone who is attending for them to read for the first 20 minutes of the meeting, according to Business Insider. Afterwards, whoever is presenting fields questions. While it’s definitely a unique method of showcasing new ideas, Bezos believes it forces careful consideration of one before bringing it to his attention -- something a PowerPoint presentation just doesn’t accomplish.

“‘PowerPoint-style presentations somehow give permission to gloss over ideas, flatten out any sense of relative importance, and ignore the interconnectedness of ideas,’” he wrote in a 2004 memo explaining his decision to purge PowerPoint from Amazon.

Blue Origin president Meyerson was reluctant to engage in this practice. However, he relented. And now he admits to being a “complete convert.” 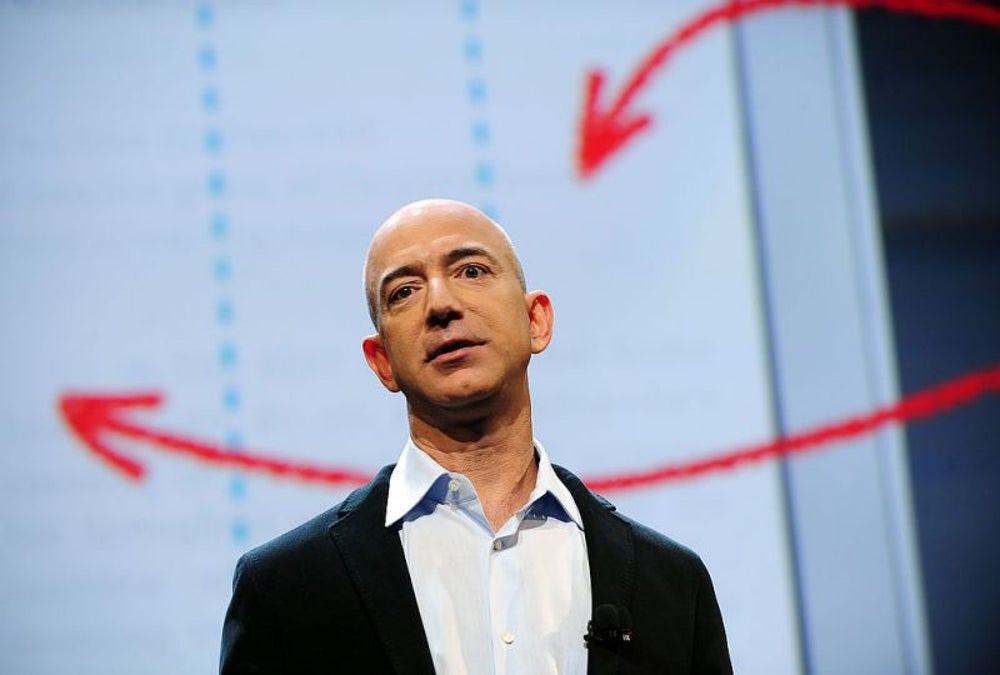 Bezos took his mantra, “What’s dangerous is not to evolve” and applied it to his leadership when he bought The Washington Post in 2013. The publication, while old school and respected, had long been failing in terms of readership and expansion.

The first is in part due to him integrating aggregation content into the site. Bezos did so after seeing that aggregator sites were getting more traffic by summing up articles from the Post than the publication got writing them.

As for ideas, Bezos gave funding to PostEverything, a millennial-focused site for experts to publish their opinions. He is also trying an experiment where in lieu of running costly global news bureaus, he’s instituted an automated web hub that connects The Post to hundreds of freelancers in the U.S. who can be assigned articles.

Will it work? Let’s be like Bezos and see.