The Luxury of Flexible Ownership

Partial ownership has moved beyond yachts and ski chalets. Find out how businesses are capitalizing on this trend sweeping the middle class.

By Alexa Vaughn October 15, 2007
Opinions expressed by Entrepreneur contributors are their own.

Picture a woman stepping out of her car in Manolo Blahnik shoes as a toy pinscher lounges inside of the Louis Vuitton bag swinging from her shoulder. Once upon a time, you could almost safely assume that she was a member of the economic elite. But today it's possible that this woman is an average member of the middle class only minimally splurging to own the luxuries she's always fantasized about, including the dog--even if that ownership is partial or temporary.

Welcome to a consumer culture that's becoming increasingly comfortable with short-term and partial ownership, and to a world of businesses taking advantage of this booming market.

Changing Perceptions
Auction websites, in part, have fueled the popularity of this type of ownership, says Daniel Nissanoff, author the FutureShop: How the New Auction Culture Will Revolutionize the Way We Buy, Sell, and Get the Things We Really Want. "Markets like eBay have made products more liquid," he says. "We can view [products] as transitory objects that we can buy and sell back as we fall in and out of love with them. There is recognition that you don't have to own something for your entire life--there's a finite life to material possessions."

Nissanoff also says that the internet's auction culture has made buying used objects more acceptable to customers of all economic classes. "Once you purchase a pair of used Manolo Blahnik shoes on eBay, it's not that far of a leap to share everything else," he adds.

That certainly rings true for BagBorroworSteal.com, a website that leases out designer handbags and jewelry and plans to add other fashion luxuries like shoes, gowns and furs. The three-year-old business was highlighted by TLC fashion queen Stacy London on her show Fashion Fanatic, among other media outlets, as a way to afford current designer accessories.

"It's really exploding," says Michael J. Smith, the company's CEO. "Last summer we had a few thousand customers and now we have at least 450,000. Media exposure has been big for us, as well as word of mouth."

Sharing Resources
Businesses specializing in shared and temporary ownership of everything you can imagine--designer handbags, pets, yachts, cars, planes and computers--say they're also experiencing rapid expansion as the efficient use of resources has become popular with people of all economic backgrounds. 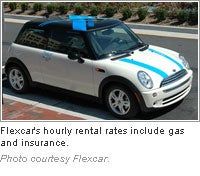 "It makes sense from an environmental and economic standpoint when you look at all the resources and assets we have but don't use all the time," says Neil Peterson, founder of Flexcar, which sells a range of membership packages to customers who can reserve a locally parked car over the internet. "Sharing the use of an asset makes sense when instead of paying $600 to $800 a month for access to a car, for example, you can pay $100 to $200."

Though Peterson initially targeted Seattle's residential markets when starting the company in 2000, he soon found that his business attracted everyone from members of the corporate world to those that couldn't afford to buy their own car. Now Flexcar has rapidly expanded to at least 2,000 cars across 15 states since AOL creator Steve Case bought the company in 2004.

Popularity Less Temporary
Flexible forms of ownership have become so popular that some business owners have found they tend to attract media exposure and word-of-mouth promotion with surprising ease.

FlexPetz creator Marlena Cervantes is one of them. Her San Diego-based business, which started setting up pet-sharing memberships to screened customers in March of this year, has already expanded to Los Angeles, New York and, next month, San Francisco.

"We didn't even have the marketing budget to advertise with anything besides our webpage and word-of-mouth, but after local media outlets contacted us, [our marketing campaign] has taken off and created a life of its own," Cervantes says of the exposure the business has gotten from media outlets including the Associated Press and TimeMagazine.

Existing businesses also are finding ways of incorporating this ownership concept, says Nissanoff. He recently reviewed a new proposal from a computer manufacturer to let customers purchase the option to sell their computers back to the manufacturer when they don't want it anymore, much in the same way customers buy warranties up front. This way, customers would know from the beginning that they could recover some of the initial purchase price later on.

For guidance in developing business models, both Peterson and Smith say their businesses looked to older temporary ownership companies, such as those in the timesharing industry. Peterson also says visits to Europe, where shared ownership businesses for a variety of assets are more commonplace, were a huge influence.

U.K.-based Yours2Share.com, for example, offers a free public ad space that operates like a Craigslist for people interested in shared ownership for absolutely anything across the globe. But as a couple searches on their website for U.S. opportunities shows, using a free public forum for shared and partial ownership of assets hasn't quite caught on in America just yet.