Where Are They Now?

Catch up with five unforgettable entrepreneurs we featured this year, including rebel baker and reality-TV star Duff Goldman.

December 7, 2007
Opinions expressed by Entrepreneur contributors are their own.

What do you get when you combine a reality-TV star, a pin designer, hula-hooping gurus, pirate fanatics, and a mother-and-daughter confectioner team? A year full of invigorating and inspirational entrepreneurial stories.

We perused dozens of our favorite articles to find five entrepreneurs we wanted to talk with again. Since we last spoke with them, one of the five started a new company, while another may have to shut his doors. Read on to discover where they are now.

The scoop: When we last spoke with Goldman nine months ago for a profile piece on him; his bakery, Charm City Cakes; and his Food Network reality-TV series, Ace of Cakes, he was definitely busy. But somehow, he's found time to cram even more into his hectic schedule. "It's hard, but we're having a blast," says Goldman. In March, Goldman and his friends on staff at Charm City were filming their second season. Now, they're in the middle of season four. Goldman can't say just yet whether there will be a season five, but hinted at a possible West Coast relocation. "Who knows what the show will turn into," Goldman says ominously. 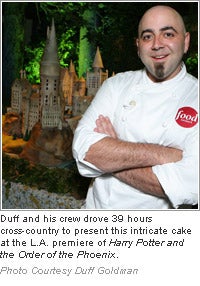 Thanks to the show's increasing popularity, Goldman has become more than just a familiar face. "I can't go to the mall without being recognized," he says. But the best part of it all is the effect he's had on other entrepreneurs. "We've received millions of e-mails from people who've become inspired to start their own business," says Goldman. "That's the most flattering thing."

Goldman continues playing bass in his indie instrumental band and has plans for a summer tour. As for future business ventures, Goldman says he and his brother, Willie, who's also the co-executive producer of Ace of Cakes, are working on three books, the first of which should hit store shelves next fall.

The entrepreneurs: Michael and Bernice Gonzales
The company: Pirates N Plunder
Home base: Whittier, California
Featured online in: May

The scoop: Michael and Bernice Gonzalez were included in our article "Pirate Sales Catch Wind" in May, as an example of a pirate-themed shop. At that time, Michael and his wife, Bernice, had owned the store for about five months after purchasing it from its original owner in December 2006. Though Michael says the months of May, June and July were steady, sales took a drastic drop in August and haven't improved since. Even special events like September's Talk Like a Pirate Day and Halloween haven't helped matters. "We may be out by the end of the month, unless a complete miracle happens," says Michael.

But he and his wife are trying to remain optimistic. "We've met so many awesome human beings," says Michael. "We're just going to have to press the re-set button." In fact, he says he's already made contact with people interested in pursuing other pirate-inspired business opportunities with him and his wife in the near future.

The entrepreneurs: Sondra and Allyson Ames
The company: Wonderland Bakery
Home base: Newport Beach, California
Featured online in: May 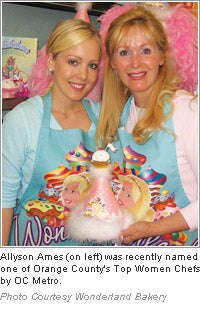 The scoop: Mothers and daughters share a special relationship. That's especially true when it comes to Sondra and Allyson Ames, a mother-daughter entrepreneurial team we featured in a May slideshow on eight mother-daughter businesses. Their company, a successful and colorful bakery, was founded in 2005, but is already outgrowing its five-year-plan. Last year, Wonderland Bakery had sales of $1.2 million. This year, Sondra says the company will exceed $2 million thanks to strong internet sales and the opening of a new store in South Coast Plaza, a premier shopping destination in Orange County.

Since we last spoke with Sondra and Allyson, they've launched the Wonderland Adventure Collection, made up of products like the Allyson Wonderland Storytime Bear by Gund, the Wonderlicious book, a fun and flashy fashion line, and signature chocolates. To keep up with their recent growth, they've hired 22 new employees in the past seven months.

Sondra says their mention in our slideshow prompted many visits to their website and has even inspired several mother-daughter teams to start their own business. Looking toward the future, the duo hopes to raise capital in January and to appoint a board of directors to help the brand grow. 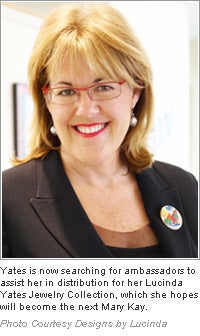 The scoop: Nothing can quash Lucinda Yates' entrepreneurial spirit--not even being homeless. We included Yates in "Starting from Scratch" six months ago, an article about five entrepreneurs who started their companies with $1,000 or less, but have now surpassed the $1 million mark. Yates, who was homeless for about a year and a half following her divorce, started her pin business 20 years ago as a way to help non-profits.

Now, 5 million pins later, and after raising more than $25 million for non-profits, she's started another venture. "I always like a lot going on," says Yates. Since we last spoke, she's launched Lucinda Yates Jewelry Collection. In just two months, she designed an entire line of jewelry and is already selling pieces from it. "I'm so glad I've gone back to my roots," says Yates, who first learned the craft of stringing beads from other homeless people.

Thanks to her mention on Entrepreneur.com in June, Yates was selected as a guest on The Big Idea: Donny Deutsch and is currently filming for an episode of Montel Williams that should air later this month. 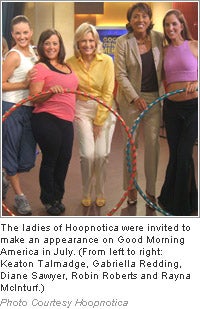 The scoop: In "Getting Fits Gets Fun," we profiled five companies that take the work out of working out. Hoopnotica was one of them. The company, known for its Hoopnotic hula-hoops and instructional DVDs, teaches the art of hoopdancing, a workout combining hula-hooping with dance. Since being featured on Entrepreneur.com, Hoopnotica has experienced a surge of media attention. Not only were the ladies of Hoopnotica invited to visit the set of Good Morning America for an on-air demonstration, but they also brought their hooping into New York's Guggenheim Museum. CEO Gabriella Redding says you also can expect to see Hoopnotica featured in three of the top 10 prime-time, reality-TV shows in the coming months.

In January, Redding will appear on QVC to sell their hoop and DVD combination set. But they're not stopping there. Hoopnotica is beginning a partnership with Acorn Media, an international distributor of wellness and fitness DVDs. This means their beginning videos will be available in bookstores, grocery chains and college campuses across the globe. Redding predicts the company will have sales of $600,000 for 2007--more than quadruple what Hoopnotica brought in last year. Their next goal: to grow their annual income to $10 million by 2010.