Unlike most reality show winners, Randal Pinkett was successful long before he was hired by Donald Trump after the fourth season of "The Apprentice." His company, BCT Partners, was posting seven-figure revenue numbers just four years after Pinkett launched it in 2001 with no startup capital. He holds five academic degrees and was a Rhodes Scholar and captain of the track team at Rutgers, and at the age of 37, his resume already reads like a who's who of the world's best corporations, academic institutions and honors. On top of that, he's written two books and has a third on the way.

He shares his thoughts about where he's been, where he's going and what he's learned along the way.

Entrepreneur: What did you learn from Donald Trump that has helped you in terms of being an entrepreneur and running your own businesses? Was it more about adding to what you already knew? Or did you learn things from him that were completely new to you? 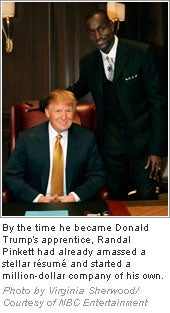 With respect to being the apprentice and being the winner, I learned a tremendous amount over the course of the year--everything from the project I managed in Atlantic City to observing Donald Trump in action and just studying his company and how it's run and how it's organized. Even in my travels across the country and meeting people at different events and the opportunity to engage other entrepreneurs and young people and business leaders and executives, I've just learned a lot in each and every one of those opportunities.

One of the more specific lessons that I've applied in my role back at BCT is really trying to isolate and decide what is the best leverage for my time. Donald Trump is a very busy man and he has a lot of responsibilities, but he does a really good job of zeroing in on what is his unique contribution to his organization. For him, it really is the art of the deal and being involved with getting deals and closing deals, and he's extremely good at that.

So before going on the show, I would say that my time was very scattered. It was divided up among a great many different tasks, from project management to sales and marketing to operations to administration to hiring. The list was relatively long, whereas now, I really just focus in on one thing, and that's business development. I build relationships, I find opportunities and I close deals. That's pretty much all I do. I try to strip away everything else because business development is the best leverage for what I bring to the company. The other tasks I used to do are better served for someone else.

Entrepreneur: You were both a Rhodes Scholar and an accomplished athlete while in college. How important is it to be well-rounded, and what's the secret to doing it successfully?

Pinkett: I'm a big believer in well-roundedness. I would much rather have a student with a 3.5 with extracurricular activities than a 4.0 with no extracurricular activities or leadership experiences. I believe it brings benefits in tangible and intangible ways. Tangibly, you learn things like how to multitask and how to juggle different responsibilities, how to focus on what you're doing when you're doing it and to develop a level of proficiency, if not excellence, that I believe spills over. I believe the discipline it takes to be an athlete spills directly over into things like business or time management or leadership for that matter.

Entrepreneur: Your book Campus CEO talks about how people can start a business while still in college. What ratio of education to practical experience and street smarts would you say makes a successful entrepreneur?

Pinkett: It is an equal and healthy balance of both, and I say that from the standpoint of not necessarily that you need a formal education to qualify as having an education, but rather you need to spend time studying and learning and mastering what it is to be in business. You don't learn things like financial accounting or profit and loss or internet marketing strategies just by living life. You've got to sit down and spend time to read and talk to people and learn and understand and digest, and then embody those best practices.

But at the same time, I believe there is a tremendous value in street smarts, in developing a level of intuition and dedication and a street-level mentality that says you're willing to try anything and willing to do anything and willing to put in the time and effort to get the job done and to trust your gut and follow your instincts and not necessarily rely on what conventional thinking would suggest, but what your intuition would suggest. There are a great many entrepreneurs who have been able to break the mold, not because of what they read in a book, but because of what they didn't read in a book and believe could be done in light of that.

Entrepreneur: Your latest book talks about ways for African-Americans to break into predominately white institutions. What's the line between the ability to recognize things the way they are and navigate them, and striving to change things for the better?

Pinkett: At every stage in our lives, we have to make judgment calls as to whether we want to challenge the system or whether we want to subscribe to the system or follow the system. Part of the art of facilitating change and challenging societal norms is knowing when to hold them and when to fold them--to use Kenny Rogers' lyrics--when to stand up and speak up and when to sit back and maneuver more quietly. If anything, the more influence, the more power, the more standing that you have, naturally the more you have a responsibility to challenge the system.

I wouldn't tell a college graduate who has been hired by a corporation and they have a dress code to challenge the dress code on day one--you know, the company tells you to wear a tie, and you come in wearing shorts. But five years from now, 10 years from now if you become a manager or an executive, and you believe the dress code may not be accommodating or may not be receptive to people of different backgrounds, now you're at a point in your career where you can challenge the system, where you can look to facilitate change. I would say you have a responsibility, in fact, to do that. I think it's an art, and there's no silver bullet in terms of when to do it and when not to do it, but needless to say, change in our society is predicated upon individuals being willing to stand up for what they believe in, and often times that means going against the grain.

Entrepreneur: You've put a lot of emphasis in your career on social entrepreneurship and the double bottom line. Why is it important for successful business owners to give back to their communities, and what are the best ways for them to do that?

Pinkett: First and foremost, I believe that the mind-set of social entrepreneurship--not necessarily the practice, but the mind-set of believing that community investment and environmental responsibility and giving back--is not something that you do because it's philanthropy or goodwill, but you do it because it's good business, and that can actually lead to competitive advantage for your firm. The way that it's done is by creatively seeking out opportunities where your business objectives align with social objectives. You look for the synergy between your corporate responsibility and your branding, or you look at how involving diverse suppliers can actually give you an edge. You look at how you can partner with your local community to better serve that community, but also to draw talent from that community.

The list goes on and on, but nowadays it's not rocket science. If anything, it's more making the commitment that you believe in these tenets and seek out those opportunities. Decades ago, we were at a loss for having really solid examples of companies that have done it well. I think nowadays, we have the examples. We know the best practices. Now it's a matter of having the commitment and the desire to want to adopt those practices.

Entrepreneur: What's next for you at this point?

Pinkett: I'm fully expecting that BCT Partners will continue on our current trajectory and establish ourselves as a legitimate and long-standing social enterprise that, when people talk about social ventures that have grown to scale and are able to balance the double bottom line effectively and explicitly, that they will point to BCT Partners. We're not there yet. We're moving in the right direction, but we're not there yet. But it is my expectation that we will get there, and I will consider that an accomplishment, not just for me, but for my colleagues at BCT Partners and my business partners.