A Taste of European Trends

Thinking about starting a food-related business? Take a page from Europe's cookbook with these 5 gourmet concepts.

By Jennifer Grzeskowiak July 14, 2008
Opinions expressed by Entrepreneur contributors are their own.

Tapas, sushi, wine bars. Some food and drink concepts have become so prevalent in the U.S. that perhaps you've forgotten they originated abroad. OK, the Japanese chefs behind the sushi bar might be a bit of a tip-off.

The point is that if you're putting together a business plan for a food-related venture, there's no need to start from scratch. Check out five trends that got their start overseas and are taking a foothold here. Some have been popular in Europe for decades, while others have just emerged in the past few years. Bon appetit. 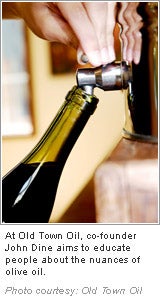 Rather than pints of beer, these shops are serving up olive oil by the bottle. And before making a purchase, customers can sample a variety of oils side-by-side straight from steel tanks, known as fustinos or "fustis" for short. The shops typically carry at least a dozen varieties with the place of origin ranging from California to Tunisia. Similar stores can be found throughout Europe, including high-yielding Italy and Spain.

John Dine, who owns Old Town Oil in Chicago with his three brothers, says he was dining in Spain when he first realized that two olive oils could taste significantly different. Unsatisfied with the general quality of olive oil available in the U.S., Dine began shipping bottles back from Europe and, after receiving high praise from his friends and family, opened Old Town Oil. 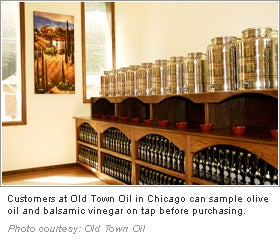 The store offers mainly olive oil and balsamic vinegars, which also are available for tasting, in addition to a few gourmet foods, including olives. Dine aims to educate people about the nuances of olive oil and help them figure out what they like--all of which is much easier when customers can compare multiple oils side by side.

Old Town Oil has seen a 10 percent increase in sales nearly every month since opening in July 2007. "When you look at how many people are out there, I feel like we should be opening more stores," he says. "This is going to explode."

Tip: If you already own a retail store, dedicate a corner where people can taste and purchase olive oil.

Visit an online food forum and you'll likely find home chefs discussing how to cook sous vide in their own kitchens. The technique, which translates to "under vacuum," entails cooking food in airtight bags in below-boiling temperatures for long periods of time. Originating in France more than 35 years ago, sous vide can make food more tender and help it retain its flavor.

Top chefs in the U.S., including Thomas Keller of French Laundry and Per Se, are experimenting with how sous vide can change the texture and flavor of food. At the other end of the spectrum, restaurant chains are using the technique to mass produce food in a central location. Chef Hinnerk von Bargen, a professor at the Culinary Institute of America, explains that restaurants can prepare a pouch of osso bucco--braised veal shanks--in one kitchen and then send out the pouches to other locations to reheat and serve.

"These dishes need a great level of skill, which the cooks usually don't have," von Bargen says. "Sous vide allows them to make more sophisticated dishes."

As diners become more knowledgeable of sous vide, some are attempting the technique at home. Keller is coming out with a book, Under Pressure: Cooking Sous vide, in the fall. But from the non-professional's perspective, the proper equipment is pricey and temperatures must be carefully controlled to prevent botulism.

"It's going to be another decade before there's an awareness through the entire food community," von Bargen says.

Tip: Though the interest is developing slowly, the home cook market for sous vide is still virtually untapped.

From the home of mushy peas comes a more appetizing concept: the gastropub. The Eagle in London, opened in 1991, is recognized as the first eatery to call itself a gastropub, a term that combines "gastronomy" and "pub." At these restaurants, the food is just as important as--if not more than--the beer. And often the wine list gets equal space on the menu. Expect to find recognizable pub fare, like Scotch eggs and fries, but with an upgrade. The Crow Bar and Kitchen, in Corona del Mar, California, for instance, offers Scotch quail eggs and duck fat fries with truffle aioli.

The trend made its way overseas with the 2004 opening of The Spotted Pig in New York City, which earned a Michelin star. Since then, gastropubs have begun popping up on both coasts and in between. The past year has seen the opening of numerous gastropubs, including Salt in Byram, New Jersey; TAP in Atlanta; Highland Kitchen in Somerville, Massachusetts and Quinn's in Seattle.

Tip: If you already own a restaurant or a store that sells beer, inject the gastropub influence by offering a few beer-and-food-pairing suggestions.

Mixing alcohol and science experiments usually isn't the best idea--at least it wasn't in college. Molecular mixology, however, is an exception. With science as their foundation, "mixologists" turn alcohol and mixers--sometimes unconventional ones--into pearls, foams, gumdrops, mists, beads and blobs. Renowned bartender Jamie Boudreau has a recipe for a martini sorbet on his blog that contains not only vermouth and gin, but also agar and xantham gum that allow the liquor to freeze. Other common molecular mixers include calcium chloride, bloomed gelatin and sodium alginate.

An offshoot of molecular gastronomy, molecular mixology took off at a 2005 educational event in Paris held by the distiller Bols and attended by eight of the world's top bartenders and Herve This, known as the father of molecular gastronomy. Today, you don't have to walk far in New York City to find an upscale restaurant or bar like WD-50 or Japonais experimenting with the possibilities.

Tip: There's no need for your bar to place a wanted ad for a molecular mixologist just yet. Major beverage companies are beginning to offer some alternatives. Cointreau recently introduced a kit for creating "Cointreau caviar"--solid, iridescent spheres of the spirit.

Swiping your card at the table

From trattorias in Italy to bistros in France, swiping your card at the table is nothing new. The technology currently is being used at restaurants in Europe to make it easier to pay with chip-based cards, which are standard there and require a PIN.

Now companies such as Ingenico and VeriFone are offering systems in the U.S. that allow diners to settle their bill without their card leaving the table. This includes separating the check, paying with a combination of cash and credit cards, and leaving a tip.

Without that full functionality, "there's less of an incentive to switch over," says Grant Drummond, director of Marcom Services for France-based Ingenico. The restaurants benefit by allowing customers to enter their PINs, which is cheaper than running credit transactions. Servers also spend less time involved in the payment process, and tables turn over more quickly.

From the consumers' perspective, fraud is less of a concern because their card never leaves their sight. The technology also can be used for diners picking up food curbside--a very American concept--to pay from their car without handing over their card.

San Jose, California-based VeriFone has nearly 500 locations in the U.S. using its On the Spot products, according to senior VP of marketing Paul Rasori. The company's clients include Vento Trattoria in New York City and Roberto's Ristorante in Elmhurst, Illinois. The Houston-based restaurant chain Carrabba's Italian Grill is introducing the technology in its restaurants this summer.

Tip: When implementing these products, make sure your servers explain to diners that paying at the table will help prevent fraud. Especially in fine restaurants, you don't want customers to feel like you're trying to rush them.