Fallout 3 was a bona fide blockbuster, but the tweaking hasn't stopped.

By Marc Peruzzi & Pieter van Noordennen May 21, 2009
Opinions expressed by Entrepreneur contributors are their own. 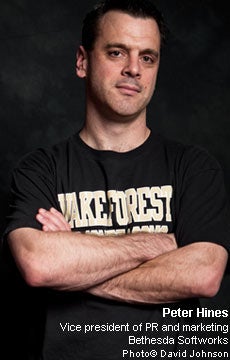 Maryland's Bethesda Softworks is a serial one-hit wonder. While other development houses crank out one adventure after another, Softworks releases a single obsessively detailed title every few years. The massive virtual environments it creates are hotly anticipated by the gamerati. Fallout 3, a single-player role-playing game set in a post-apocalyptic Washington, DC, launched with 4.7 million copies, brought in $300 million in sales, and was hands down the best game of 2008. And the company isn't finished with Fallout 3. It's rolling out extension packs with new maps and content every few months, like recent releases Operation: Anchorage and The Pitt, which users can download straight to their PCs or Xbox 360s.

"Our games encourage people to sink huge chunks of time into their characters," says Peter Hines, vice president of PR and marketing. "Downloadable content keeps it fresh and gives players new stuff to do so that their experience with a game doesn't end after a week." Plus, it offers a continuing revenue stream:Game expansions are roughly $10 per download.

But Fallout isn't the only arrow in Bethesda's quiver: A new game for Xbox 360, Rogue Warrior, is due out in the fall. And the company's sister division, ZeniMax Online Studios, is at work on a massively multiplayer online role-playing game (MMORPG), the type of revenue-generating behemoth that could pit Bethesda and ZeniMax against World of Warcraft, the gaming community's 10-ton hammer.

Silicon Mountain Holdings Inc.: It owns two of the hottest boutique gaming computer system manufacturers in the U.S., WidowPC and Visionman, and just released a line of value-priced high-definition TV-PCs.

SteelSeries: Once known only to hard-core gamers, SteelSeries inked a deal with BestBuy to put its gaming accessories, including the popular WoW mouse, in front of consumers.

ThatGameCompany: TGC released its groundbreaking game Flower for download on PlayStation 3 and is coming out with new games that deliver emotional content besides anger, bloodlust and rage.