3 women who love shoes make a living designing and selling their own creations.

By Margie Zable Fisher April 30, 2010
Opinions expressed by Entrepreneur contributors are their own.

Imagine this: you, working from home, designing and making great shoes, and making money. Think this is just a pipe dream, the stuff of novels?

It's actually a reality for several home-based shoe manufacturers.

The key to creating a successful home-based shoe manufacturing business is to manufacture your shoes outside of the home. The rest--including the design and marketing--you can definitely do from home. How? Read on.

Get Educated
While shoes may be your passion, you'll still need to run a business. There are industry trade publications, such as WSA Today and Footwear News, that will provide resources and help get you up to speed. They also offer information on industry trade shows, where you can learn more about the business of shoes.

And even if you don't want to manufacture the shoes yourself, consider taking a shoe-making class, to learn more about the process of shoe-making.

"By learning how to make shoes, you'll learn the ways to save money on shoe production, as well as materials you need to use to keep the quality high," says Sissy Puccio, a certified pedorthist (someone trained in the design, fit and function of shoes) and president of International Shoemaking Design in Cleveland, which offers shoe-making and design classes, manufacturing and consultations.

In addition to International Shoemaking Design, other places that offer shoe-making and design classes include the Shoe College in Jerome, Ariz., and the Jewish Community Center in Manhattan. In fact, Emily Putterman Handler's shoe-making courses at the Manhattan JCC are so popular that she will soon be taking her classes on the road to different cities, through her new business, The Cobblettes.

Kristina Kozak learned how to make shoes by attending Putterman Handler's classes. The creator of an eponymous shoe line spent weekends in New York City in 2005 and 2006, learning design and shoe-making, and going home to Pembroke, Mass., during the week to create shoes.

Decide What Kind of Shoes You Want to Make 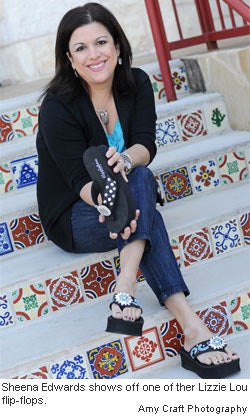 "I was a stay-at-home mom, but I was always looking for something 'extra' to do. When my cousin in India told me that she could help me produce a new product, I started thinking about different items needed on the market. Being from Texas, I wear flip-flops almost year-round. As a mother of three, I am constantly chasing a kid or running out the door, and sometimes fashion is not my priority. So the idea of creating beautiful, fun flip-flops that would be comfortable but still look great seemed the perfect fit for me."

Edwards' crystal-embellished women's flip-flops retail for $99 and up. They're known for their comfort, as well as beautiful designs. "I'm not a designer by trade, but I am continually inspired by design. Some of our shoe designs came about from admiring details on a great T-shirt or a special kind of beading," Edwards says.

Kozak decided to make funky women's heels that could be dressed up or down. "I wanted to create shoes that were investments, handmade and beautiful," notes Kozak of her shoes, which start at $275. She goes to New York City at least once a month and spends time in the leather district. The leathers, she says, often inspire her designs.

Kim Quillen, CEO of Convertibles Footwear in Ravenswood, W.Va., had a Eureka moment that led to her decision. "I love shoes and was always looking for great ones. A few years ago I was looking at a pair of sandals that I wanted to buy but felt they were not practical for the price and only being able to wear them with one outfit. My designer's eye kicked in, and I had an 'aha' moment of designing an interchangeable sandal that would take you from casual to dressy in the change of a top."

The company's first style, the "Kimmie," is a T-strap thong sandal with a one-inch heel. The $84.95 Convertible sandals are available at Shoebuy.com and boutiques, and allow you to snap decorative tops on and off to match your outfit for the day. The Kimmie also includes a set of "It's a Bling Thing" snap-on tops. Additional interchangeable tops can be purchased for $33 to $40, essentially creating a new pair of shoes for $40 or less. 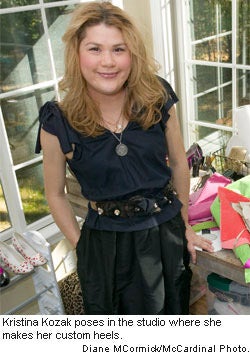 Kozak started out making her custom women's heels by hand, in 2006. When demand increased, she began searching for manufacturers. After searching online, she e-mailed several European manufacturers and explained her situation, sent pictures of the shoes she wanted made, and estimated that she needed 200 to 500 pairs of handmade shoes per season.

"Few suppliers are willing to work with small designers, and I only got a couple of replies back, but one supplier stood out. I met with the supplier in Italy several times to work out the details, and the production process has worked out well," Kozak says.

Convertible Footwear's Quillen also began searching online for manufacturers, and found Lisa Robbins, who was an online shoe retailer. Robbins was intrigued enough to meet with her and eventually became her business partner. Robbins found a manufacturer to create a prototype, and then it was time to find a shoe manufacturer.

At an industry trade show the women were given the name of an agent for the factories in China. Says Quillen, "Our agent has been so helpful to us. She lives here in the U.S. and speaks fluent Chinese as well as having many contacts in the industry in China. We would be lost without her."

Some home-based shoe companies are lucky enough to have contacts in manufacturing. Says Lizzie Lou's Edwards, "I was fortunate that my cousin, Shilpi, in India, had connections in the clothing manufacturing industry there, which helped us get a quality supplier who is willing to make small amounts of our footwear. This really keeps costs down."

And if you don't want to manufacture overseas? There are some small shoe manufacturers in the U.S. who do private-label work, including International Shoe Design. Ask people in the industry for referrals.

Get the Money, Honey
There are many expenses involved in manufacturing shoes. While many home-based shoe businesses are self-funded initially, there is often a need for outside funding.

"My business partner and I invested $50,000. We then approached the bank with our business plan and received a business loan for another $50,000," says Convertible's Quillen. "We used the funds for public relations, manufacturing, packaging, logo design, to attend industry shows in Atlanta and Las Vegas, to travel to China, and to retain a great law team for patents and partnership contracts. We have also obtained a warehouse company that handles all our shipping and order fulfillment."

Once you have great shoes, you'll need to sell them. At the minimum, to market your footwear, you'll need a website, business cards, a logo and great photographs of your shoes. Often you'll need to create printed catalogs and/or line sheets describing them.

To promote your shoes, two tried-and-true promotional techniques include displaying at trade shows and getting publicity.

Many buyers for large and small retailers attend trade shows to see and buy shoes. "We spent a lot of money on trade shows the first year we launched Convertibles," Quillen says. "This was our largest expense other than actual manufacturing, but you can't make it without the shows' exposure." This exposure has led to Convertibles' upcoming appearance on Shop NBC and discussions with a major upscale retailer to carry the line.

Getting publicity is another way to promote your footwear, and it can be done inexpensively. "I've gotten publicity for Lizzie Lou Shoes on my own. As I grow, I will consider hiring someone to help me with this area," Edwards says. The publicity has led to local retailers carrying Lizzie Lou shoes. Edwards also sells her shoes on her website.

But you can't beat one-on-one selling. "I was shopping at Stel's on Newbury Street and was chatting with the owner," Kozak says. "I mentioned that I made handmade women's heels. I ended up selling my shoes there and having my first trunk show there." Kozak received press coverage from being in Stel's, which led to other retailers carrying her shoes. She also sells her shoes on her website.

Yes, it's possible to start your dream shoe business from home. With some knowledge and passion to fuel your dreams, you just might be the next shoe superstar.