High-fashion rental entrepreneurs are giving couture-hungry consumers a small--and affordable--taste of the good life.
Next Article

Submit your email below to get an exclusive glimpse of Chapter 3: “Good Idea! How Do I Know If I Have a Great Idea for a Business?
Lydia Dishman
September 1, 2010 6 min read
Opinions expressed by Entrepreneur contributors are their own. 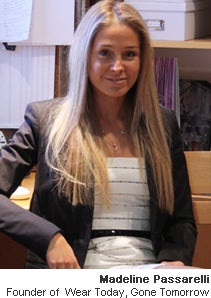 Madeline Passarelli didn't have any fantasies about the fashion business. Cutting her sartorial teeth from a young age at her father's apparel company, then as editor for several style magazines, she was schooled in the less-than-glamorous aspects of design and distribution. But one lesson in style led her into entrepreneurship: Looking fabulous shouldn't require a small fortune, especially when trendy threads get relegated to the back of the closet after just one season.

Translating that principle into a profitable venture put Passarelli on the cutting edge of an emerging industry. As founder of the aptly named Wear Today, Gone Tomorrow, she's one of the leaders in a nascent group of startups offering short-term rental of luxury apparel and accessories to customers eager to sport designer labels, not empty wallets.

Though posh party frocks make up the bulk of Wear Today's rental assortment, a free membership (with registration) allows customers to choose from a limited selection of designer jackets and tops, too. Items are available in a range of sizes and can be borrowed a week at a time. "I generally stock colorful pieces that somehow have that 'wow' factor," Passarelli says. By renting instead of buying, die-hard fashionistas only pay 5 percent to 10 percent of the eye-popping retail price tags of $300 to $1,000.

Passarelli took her cue from the boys. Men have been renting tuxes for ages. Women, on the other hand, typically purchase their formalwear outright for hundreds, sometimes thousands, of dollars--even if the intent is to wear it once. She says even the most basic black cocktail dress gets worn an average of two to three times before its owner can't bear to be seen in it again. But with the recession, consumer spending habits got a serious makeover--especially for such luxury purchases.

Only 44 percent of affluent consumers bought personal luxuries in 2009, down 10 percent since 2006, says Pam Danziger, president of Unity Marketing and author of Putting the Luxe Back in Luxury. They were in good company. According to Danziger, those who scrimp and save in every area of their life to be able to indulge in a brand-name item also snapped their wallets shut.

Danziger has found that many of these so-called "aspirational" shoppers are young adults 18 to 29 years old--the millennial generation--who haven't reached affluence yet. That hasn't stopped them from cultivating a lust for labels, thanks to indulgent baby boomer parents. Unfortunately, millennials were also hardest hit by the recession. Though highly educated and digitally savvy, 37 percent of them are unemployed, the highest rate for that group in more than three decades, according to Pew Research Center.

What better breeding ground is there for a business rooted in renting--rather than selling--designer clothes and accessories than a newly minted pool of some 50 million cost-conscious consumers well-versed in e-commerce? 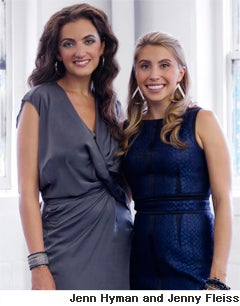 Twenty-something trendsetters formed the first test market for Jenn Hyman and Jenny Fleiss. While the two were still students at Harvard Business School, they put their heads together and came up with the idea of renting special occasion dresses to women who wanted to look great--in as many different looks as they could--on a tight budget.

After months of experimenting, and buying much of the rental clothing with their own funds, Hyman and Fleiss debuted Rent the Runway in November of 2009. Membership is free with registration, and dress rentals start at $50. To add a bit of bling to that strapless frock, accessories rentals start at $10. Less than a year after launch, RTR boasts 450,000 members and its staff has grown to more than 30 employees to handle demand.

Selling the concept to potential members is easy, but Hyman and Fleiss say designers were harder to convince. Purchasing their stock in the manner of traditional retailers, the two eventually proved that RTR isn't taking sales away from the designers. Rather, Hyman explains, "It creates a gateway into retail by grooming the next generation of buyers." With a membership base filled with millennials, RTR acts as a forum for building brand loyalty. "This allows designers to be exposed to a whole new set of customers," Hyman maintains, "and they'll seek that label out when they are ready to buy something."

But 20-somethings aren't the only ones coveting the latest Chanel or Prada item. Lloyd Lapidus and Greg Pippo had been observing their wives, mothers and sisters raid each other's closets for years, swapping accessories to give their outfits that extra on-trend edge.

If it was taking place right under their noses, the experienced entrepreneurs understood, it was happening in homes all across America. So the two launched Avelle (formerly known as Bag, Borrow or Steal of Sex and the City fame) in 2004, to provide members with a virtual closet stuffed with designer arm candy.

Customers could join for a nominal fee (immediately applied to their first rental) and borrow bags for weeks, or months, at a time. Avelle's rentals enabled gals hankering for the newest hobo to hop over waiting lists for "it" bags so common at high-end retailers. As Avelle's membership base grew, so did its opportunity to crowdsource. CEO Michael Smith explains that by reviewing customer comments daily, Avelle was not only able to stay on top of certain trends, but also grow in the direction of demand.

Currently, the site offers more than 4,000 styles of luxury handbags, jewelry, sunglasses, watches and luggage from more than 150 designers, including Chanel and Louis Vuitton. Avelle also extends its own cleaning and repair service to members. With 2 million members and counting, Smith maintains that Avelle has plenty of room to grow. "People are still making sacrifices in their daily lives. Avelle offers them a much-needed emotional boost without the stress or commitment of ownership," he says.

Jenny Fleiss admits that the recession has helped the rental business model, as more people pay close attention to cost per wear. However, she says, "As the economy picks up, there are more special events to attend. Renting will always be a smart way to go."

As long as these startups continue to stay flexible in terms of staff, inventory and consumer trends, they may be able to roll with whatever the economy serves up. And as millennials continue to reach affluence in an age of frugality, Danziger says, the most successful companies will keep pace with shifting perceptions of what luxury goods are worth--and if they're worth keeping.