By Lisa Girard January 5, 2011
Opinions expressed by Entrepreneur contributors are their own.

In the weeks after the holiday shopping season comes to a close, there is always the follow-up frenzy of customers returning gifts that didn't quite strike their fancy. While many are a straightforward exchange, other returns can become complicated (and costly) for small business owners who don't have the deeply absorbing pockets of a department store chain. While you may think you have clear rules for returns, consider the mistakes of three small-business owners -- and learn how to avoid these common pitfalls.

Mistake No. 1: Your rules for reshipping fees are vague.

Eric Heinbockel, co-founder of Chocomize.com, realized this mistake after a shipment to a rural address was returned to the chocolate company's headquarters in Cherry Hill, N.J. The customer provided an address the United States Postal Service did not ship to, says Heinbockel, who started the company with two partners in 2009. While initially arguing about who should absorb additional shipping costs, Heinbockel ultimately covered the fee. He decided it wasn't worth losing a customer who had made several purchases from the site in the past. Still, the experience led Chocomize.com to clarify its policy. It no longer pays for reshipping costs if the customer makes the mistake -- and it explicitly mentions rural addresses.

"This hopefully helps to deter folks from making this specific mistake and for those reasonable customers who do make this mistake, they will leave the issue alone [and pay for it themselves]," says Heibockel, whose company earns nearly $1 million in annual revenue.

But for those customers who staunchly insist it was not their fault, Chocomize.com will absorb the additional shipping fee. After receiving negative feedback from a handful of customers on Facebook, Twitter, blogs and the comment sections of online articles, Heinbockel has learned that "even a number of your biggest fans can have less of an impact on your company's reputation than one very angry customer."

Mistake No. 2: Your window of time for returns is too broad.

After 27 years in business, Richard Ignatz has continued to shrink the number of days he allows a customer to return purchases from his upscale clothing stores and he makes it clear there is no wiggle room to negotiate. Up until 10 years ago, the window for returns was 30 days for his five Boutique Emmanuel locations across Michigan. Five years ago he cut the time in half, and today it's even shorter -- within 10 days. 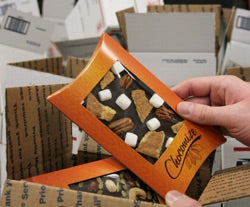 "As a small boutique that carries a limited number of garments in each size, when a customer brought back an item back 30 or 60 days later, the season was over and I would have to put it on the 50- to 75-percent-off rack," says Ignatz, whose boutiques ring up annual revenues of $2.8 million. "Plus, we missed a chance to sell it to someone else two or three times in that period."

When he established the shorter 10-day return policy, Ignatz also made sure to avoid any backlash or confusion. Employees show customers the return policy, pointing to it on the receipt, and require them to initial it. The marked receipt then becomes a physical reminder the customer has acknowledged the rules and agrees to abide by them. Since instituting stricter return policies Ignatz says his stores' percentage of returns have shrunk from 3.2 percent to 2 percent of total sales.

When The Papery, a family-owned upscale stationery and gift store founded in 1989, had just one location in Shrewsbury, N.J., the return policy was liberal: Any item could be brought back at any time for a refund, provided the store was still stocking it and could sell it again. But five years later, when the owners started adding new locations, the company ran into problems. There were customers who shopped at multiple locations and noticed the inconsistent practices.

"If you accepted a return at one location but not another, people would complain -- especially since some of the stores are relatively close to each other and have mutual shoppers," says Betsy Majewski, who has been a store manager with the company for nearly two decades.

As it added stores -- a total of five across New Jersey -- the Visconti family decided it was crucial to adopt the same standardized 30-day return policy across the board. Company founder Dick Visconti realized that having a consistent policy is a must when it comes to earning customer respect.

"The customer should know what to expect from us," Visconti says," and know our policy will be the same no matter which store they're shopping in."

Lisa Girard is a freelance writer who covers topics as diverse as golf fashion, health and beauty, the hardware industry and small business interests. She also has been Senior Apparel Editor for PGA Magazine for more than a decade.