A (Long) Thought on the Crisis 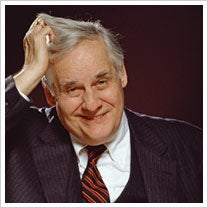 Business owners want to hire more people, but they can't get credit to create more products so more people can buy their products and stimulate their bottom line because consumers can't get credit to buy more products because their home equity lines have dried up because banks are tightening their credit lines because they can't get short-term loans from other banks that have also tightened their credit lines (even with each other) because too many of them made too many loans that consumers aren't repaying because housing prices are falling because they were overheated to begin with in many areas because people were willing to pay whatever sellers asked because they could get easy access to too much credit because banks were loaning insane amounts of money for mortgages because they could sell the mortgages to other financial entities that then repackaged the mortgages as investments because investors wanted investment products that promised big returns because more money meant they could buy more real estate and more products because our economy depends on consumers buying goods and money men moving paper around and because of deregulation or because of CRA because risk is bad unless it's good all because people want to start new businesses and hire more people but they can't because they can't get enough credit because...

Circle of life? Chicken or the egg? Who's on first? The crisis in a nutshell (with padded walls).

There are more people pointing fingers right now than a stadium full of Babe Ruth wannabes. None of that matters to business owners because they have a business to run--today. Finger pointing looks backward and--to the extent politicians are capable--forward. When people are pointing fingers, they tend to do so because people are suffering right now, but those truly suffering are conveniently ignored as everyone plays a rousing game of CYA.

News arose over the weekend of another possible economic stimulus plan. Will it be $300 billion, $150 billion, a number drawn out of a hat? Will it be a real economy booster or a feel-good year-end holiday shopping spree complete with a skull-crushing headache for the next president when the 2008 hangover carries into '09? Who knows?

What entrepreneurs want to know is: What can I do right now to survive this sequence of events, the next actions of which we have no way of predicting? If Washington truly believes small business is the job engine of America, talk about that in concrete terms instead of mind-numbing sound bites. Let's see some action on that.

Strength Seen in Intra-Cellular (ITCI): Can Its 9.8% Jump Turn into More Strength?