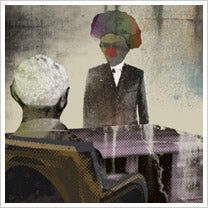 Television has entertained Americans for more than 50 years. Through those decades, a few shows have focused on employers, but many others have featured businesses by association--by focusing on the lives of employees outside the workplace. And good employees rarely make for funny employees, so the bad ones get the spotlight, and the laughs. I thought I would pull together a small list of some of the worst employees in TV history.

This is by no means a comprehensive list; rather, it's a look back at some of the worst employees from some of my favorite shows through the years. Some were before my time but viewable through the magic of reruns. Others I grew up with and remember fondly. Still others populated my early adult TV-watching years. One show is still in production. And, as you'll notice, some of the employees listed worked for cities, states and reichs.

Why this list? Why now? Easy. I wrote it. And I can make a cheesy tie-in with the new year. Don't hire these employees or their like in the coming year. Your business will be better off for it. But our funny bones would have been worse off without these characters--the worst sit-com employees ever.

BARNEY FIFE
The ultimate deputy's shortcomings came glaringly to light only when real danger arose, which, in a town like Mayberry, wasn't very often. One has to think that any big city--say, Mt. Pilot--would have eaten "The Andy Griffith Show" deputy alive. I'm reminded of an episode where Andy had to apprehend the hardened criminal three times because Barney and the ever-reliable Gomer Pyle kept letting him escape. Deputy Fife sure saw himself in an heroic light; it was just the light of delusion. Lucky for the folks of Mayberry every day was a slow day.
Employability rating: 3 (hey, he did have the one bullet)

SGT. SCHULTZ
With employees like this, who needs enemies? Through the lens of "Hogan's Heroes," one gets the impression that given enough time the Nazi regime would have imploded from incompetence. For the price of a pastry--moral: always have a French guy in your prison camp--Schultz turned a blind eye to the most egregious POW transgressions. He slept on the job. He let prisoners hold his rifle when he needed to take a load off. He gave bumbling a bad name. The key to his success: He knew nothing.
Employability rating: 1 (8 from the Allies' perspective)

GILLIGAN
Poor Gilligan was no siren, but his undeclared, accidental mission was the same: to dash the castaways' hopes on the rocks of "Gilligan's Island." If the rest of the castaways had roasted Gilligan-kabobs as their first meal on the island or let the headhunters have him or fed him to the giant tarantula or let that disoriented Japanese soldier have him as a hostage, they'd have been back to civilization in weeks, not years. His heart was in the right place, but his efforts always went awry. Of course, the crew was stranded on an uncharted desert isle--without GPS. (For all Gilligan's faults, I bet Tom Hanks would have given up Wilson to have Skipper's little buddy around.)
Employability rating: 2 (for his devotion to Skipper)

JOHNNY FEVER
Sarcastic. Impudent. Drunk at work. Dismissive of authority. Johnny Fever was all of these and more during his radio days on "WKRP in Cincinnati." But he spun some righteous tunes and he knew Loni Anderson. Besides, the dude was a disk jockey back when being a disk jockey was cool and rebellious. Now a machine can do it, a machine named Ryan Seacrest.
Employability rating: 5 (because he had little to no face-to-face interaction with customers)

CARLA TORTELLI
When the "Cheers" waitress wasn't busy insulting and berating her coworkers, the perpetually pregnant spitfire was pouring beer on the regulars, scaring the bejeesus out of the newbies and hitting on any of Sam's old baseball buddies who stopped by. At any other ale house, her tenure would have lasted half a shift; at Cheers, her attitude became endearing.
Employability rating: 3 (she did walk the guys to their car if they needed protection)

AL BUNDY
As a young man, Al Bundy had dreams, none of which involved working at a women's shoe store. And the high school football star--four touchdowns in one game--didn't hesitate to take his frustration with life's disappointments out on the women who came to his store looking to be shod in "Married ... With Children." It was a low-paying, no-glory job he took no pleasure in, but Al held on to it like it was his life's purpose. The women of Chicago fared poorly as a result.
Employability rating: 3 (for commitment, misplaced as it was)

HOMER SIMPSON
Having Homer Simpson in charge of safety at a nuclear plant is akin to having zombies work security at a Mensa gathering or Dan Quayle as the editor at Merriam-Webster or Bill Clinton as a chaperone at cheerleader summer camp. Homer is lazy, unfocused, unaware and far more concerned about the doughnuts disappearing than the reactor melting down. In fact, he's caused at least one meltdown, which he is directly in charge of preventing. D'oh.
Employability rating: 0 (because it resembles a doughnut)

GEORGE COSTANZA & KRAMER
Poor George could land jobs throughout his run on "Seinfeld," but he couldn't hold them. Kramer--he spent more than a decade on strike from his job at a bagel shop. His demands? A cool $5.15 per hour. When minimum wage reached that lofty level, he was back to work--until the boss denied him time off for Festivus. "It's a walk out!" George had his dream gig with the Yankees--calzone lunches with Steinbrenner--and even that came to an end when he was traded to Tyler Chicken for a fermented chicken drink and chicken snacks for Yankee Stadium. Kramer was the employee who never came to work; George was the employee you wish stayed home.
Employability rating: George 6 (for his ability to get hired); Kramer 0 (because there's no evidence to the contrary)

MR./MRS. GARRISON
Worse hands the fourth-graders of "South Park" could not be in. Garrison has been straight, gay, bi, male and female. No matter his proclivities and gender, as an instructor--not so good. He swears in front of his students. He brings his personal problems to the classroom. He wears his alter ego on his hand--literally--as the sock puppet Mr. Hat. Tutoring prisoners, maybe. Educating children, only in South Park.
Employability rating: 2 (a 1 originally, but a 1 as a man and a woman add up to 2)

STONE COLD STEVE AUSTIN
OK, so he wasn't on a sit com, but this is my list. When wrestling fans heard glass break on "Raw" or "Smackdown," they knew someone was in for a butt whuppin', for that breaking glass heralded the entry of one Stone Cold Steve Austin. And, for a sizeable portion of his run atop the professional wrestling world, Austin targeted Vince McMahon--the boss--as the one to be whupped. Stone Cold doused Mr. McMahon with beer, smashed the boss's limo, interrupted McMahon's speeches, and left him lying unconscious in the middle of the ring more than once. In this case, however, what was bad for the boss was great for business, as the WWE soared to new heights of popularity with the "boss as punching bag" concept.
Employability rating: 10 (as long as you don't mind suffering for your millions)