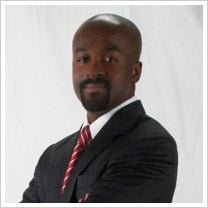 The judges on the venture capital-inspired reality TV show "Shark Tank" had their say on the Daily Dose. Now what about the entrepreneurs?

Kwame Kuadey is CEO and founder of GiftCardRescue.com, an online marketplace where people can buy and trade unused gift cards. We asked him how he escaped the tank in episode four with a cool $200,000 from Kevin O'Leary and Robert Herjavec, in exchange for a combined 50 percent stake in his company. His original request: $150,000 for a 30 percent stake.

Let's get right to it. How did you get two sharks to fund your business?
I think a few things helped. Number one, I have sales. Going in, I was at about $65,000, and I'd only been in business for about a year with very little advertising. And number two, my valuation was realistic. People have all these high valuations, but haven't proved there's a market for their product.

It was also easier to work with me because I knew my business and the marketplace. Most of our conversation didn't make it on TV, but we went through an exhaustive discussion about the market, the risk, the opportunity and all that. They understood I really knew what I was talking about. I think some people are missing that.

What experiences helped you prepare?
I have an MBA, so that helped me a lot. Going through school, we worked with companies to go through valuations and make pitches, so I did use that experience.

Then based on your experiences, is "Shark Tank" similar to a traditional venture capital meeting?
From what I've been told, this is what happens when you meet with investors. They want to know the same things: your margins, where you are taking the business, what the market is. I think people have to show ... orders or sales. Then they have to be confident and know their business inside and out.

The exchanges seem very dramatic when you're watching the show. Was it really like that?
It was tense. What you see when people go into the tank, that is all real. None of it is coached or produced. You go in there, you have your three minutes to make your pitch, and then the questions start coming. What you saw is an abridged version of it, but I was probably there for a good 15-20 minutes.

What's happened since your episode aired?
My traffic is up 500 percent, and my predicted sales are going to double this month. I'm very, very thrilled.

Can you sustain that?
There is the post-show traffic, but a lot of things come out of that. I received other media coverage, which adds up to more people looking at the site. And we're getting to the peak season of gift cards. We do 50 percent of our business from November to February, so I'm very hopeful and expectant that it will also continue. I couldn't have purchased that kind of publicity.

Have you worked with the sharks much?
Right now we are at the due diligence phase. We've talked about strategy in preparation for the show airing, and Kevin and I talked a couple of times about how we're going to handle the traffic and pricing.

We don't have a timeline, but the way things are moving, within a month or two, we should be able to come to an agreement on what the deal looks like and then move forward.

Why did you decide to do the show? Given your sales, you might have had a good shot through traditional funding channels.
Actually, one of the producers of the show found my website online and liked what I was doing and asked me to audition for the show. They sent me a bunch of questions and I answered them, and a week later I got a call that they wanted me to be on it.

It was good timing?
It was really good timing. I was employed with CitiGroup and laid off in December, but I started the company six months earlier, working on it aggressively at night and during the weekend. I just decided to run the company full-time.

I'd been funding the company through my savings and credit cards, but I was going to have to deal with that problem--it was going to be a couple of months later, but this opportunity came and I jumped on it.

Have there been any unexpected challenges during this process?
You know, it's television, so there's a lot that goes into producing this. The background story was a whole day of filming here, and probably only two seconds made it on television. [Laughs] Even the pre- and post-show interviews that you do--that part is exhausting, and you still have to go in and meet the sharks.

Well, the outcome was great.
Yes, and for me it was a once-in-a-lifetime window into what Hollywood production is like, so that was interesting.