Understanding HTML5 and Why it Matters 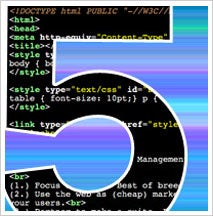 In the year 2000, HTML4 was christened the official language for web page development. A decade later, an eternity on the web, we are just beginning to hear about the next generation of HTML - HTML5.

Someday soon, HTML5 will dominate the web and completely change the way you develop your website and web-based applications. The more you know about HTML5, the better prepared you'll be to direct your company to take full advantage of this future web standard.

For the uninitiated, HTML (HyperText Markup Language) is a system of formatting that controls the look and layout of Web pages. It tells web browsers like Internet Explorer, Firefox, Safari, and Chrome how to display headings, paragraphs, and lists; where to insert images, where links point to, how to display text in tables, and much more. HTML 5 allows programmers to build sophisticated web sites that behave more like downloaded applications.

Theoretically, HTML5 will reduce reliance on proprietary plug-ins, such as Adobe Flash. This means devices that may not support Flash--such as Safari for the iPhone--will be able to leverage the functionality of HTML5, enabling the creation of applications that will run on more devices. HTML5 also supports the following features:

To learn more about HTML5, I recently sat down with Jason Brush, Executive VP of User Experience Design at Schematic, a pioneering interactive agency that's already using HTML5 in a select number of projects, and asked him a few questions. In the following HTML5 Q&A, Jason offers his insight on this major advance in Web development:

Jason Brush: HTML4 was ratified as a standard in 2000, but its features started being used in 1998. (It's important to note that HTML5 represents not just an evolution of HTML4 but the resolution of HTML4 and a competing standard, XHTML, which was the focus of much development through the 2000s.)

MB: How will the use of HTML5 change the way websites are built?

JB: HTML5 won't necessarily change the way web sites are built--it doesn't require developers to build sites in a whole new way--but it has the potential to simplify the toolset that programmers use to create sites, reducing the reliance on rich media plug-ins such as Flash and Microsoft Silverlight. For example, the new 'canvas' tag allows developers to draw within an HTML page, something that would have required Flash when developing with HTML4.

MB: When will HTML5 become the standard by which websites are built?

JB: It's very difficult to say. One projected date for HTML5's final specifications to be ratified is a very long way off--2022. However, because HTML5 is an evolution of HTML4--just as HTML4 was an evolution of HTML3--developers are already being to work with it, and there's speculation that we may see implementation of HTML5 across major browsers as soon as the end of 2011. (Note: Read A Brave New Web Will Be Here Soon, But Browsers Must Improve)

MB: Is anyone building in HTML5 today?

JB: Yes. The most notable example is Google, which is using HTML5 for its mobile version of Gmail. This has allowed the company to create a sophisticated web-based application that works both on Android and the iPhone. This also allows Google to avoid Apple's approval process, since the application is accessed via the web, and not the Apple App Store.

Prior to HTML5, Google had been developing a technology called Google Gears, which allowed users to access web applications without being connected to the internet. With the advent of HTML5, Google is shifting its strategy away from Gears to HTML5, since in the long term HTML5 will enable Google to release its applications on all platforms and devices that support HTML5 without requiring the user to download or install any non-standard technology.

MB: What's holding back more people from using HTML5 as we speak?

JB: HTML5 hasn't yet been fully ratified as a standard. While Safari, Firefox, Google Chrome, Opera, and (to a more limited extent) Internet Explorer each currently support a varying degree of HTML5's new functionality, its support across browsers is inconsistent and incomplete.

HTML5 Resources
A number resources are available for anyone who wants to learn HTML5, including: