Rewarding Employees...By Giving Them the Company

By Carol Tice February 25, 2010
Opinions expressed by Entrepreneur contributors are their own. 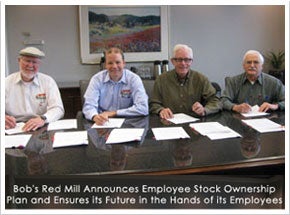 With all the layoffs that have happened over the last two years, many employees are toiling longer hours. Many are stressed by the loss of co-worker/friends. They're having to stretch themselves and learn new tasks, often doing the work two or three people used to perform.

What is their reward?

At Bob's Red Mill Natural Foods in Oregon, the answer this week is: the company. Company founder Bob Moore celebrated his 81st birthday by giving Red Mill to more than 200 longtime workers through an employee stock ownership plan. The ownership stake is meaningful--the Seattle Times reported the company had $24 million in sales in 2004, and has grown more than 20 percent each year since. In 2007, Red Mill bought a new production plant that enabled the company to triple production of its stone-ground flours, cereals and other whole-grain products.

Moore had offers to sell the company outright. Instead, he left it in the hands of people he can trust to steer it into the future because they know the company inside out. The ownership stake gives the workers the power to shape company direction, and when they leave or retire, they'll be cashed out.

In the intensity of a tough economy, it's hard to think about employee rewards programs. Just still having a job is sort of seen as a reward. But sophisticated companies such as Red Mill are way ahead of that.

What's in it for your employees? What makes them motivated to build company success? As we chug slowly out of the downturn, the companies that have workers committed to driving sales will be out in front. If you've been wondering about your succession plan, think about an ESOP as one way to turn your staff of workers into a group of vested owners who are passionate about growth.