Bankruptcy Hot Spots Linger -- Are You Living in One?

Carol Tice
Owner of Make a Living Writing
August 2, 2010 min read
Opinions expressed by Entrepreneur contributors are their own. 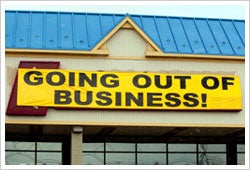 In any downturn, bankruptcies are a trailing indicator. That's because companies hang on as long as they can, take their licks, and then finally throw in the towel when they exhaust their resources.

Though the economy has perked up a bit over the past nine months, bankruptcy rates in many cities continue to climb, raising troubling questions for companies about whether their suppliers, partners and possibly customers are a good credit risk.

Given that, many businesses slogged through 2008 and made it until last year before their owners finally threw in the towel. Even though the economy was slowly turning by last fall, in 2009 bankruptcies peaked at 60,837 nationwide, an American Bankruptcy Institute study found. It was the largest tally since 1993. For contrast, in 2006 there were fewer than 20,000 bankruptcies.

As if that wasn't scary enough, it appears our national bankruptcy wave may not have peaked yet. The first quarter saw more than 14,600 bankruptcy filings, more than last year at the same point.

A more detailed study from Equifax shows these bankruptcies are concentrated in particular markets. For instance, among the top 15 market areas for bankruptcies last year, this year three markets reduced their bankruptcy rate enough to exit the list -- the Oakland, Calif., area, Seattle, and the Washington, D.C., market.

Most California cities weren't so lucky, however, and the Golden State remains the hardest-hit for bankruptcies. The market areas for Los Angeles, Riverside/San Bernardino, Sacramento, San Diego, Santa Ana/Anaheim, and "the rest of California" (considered as one big market area), all made the top 15. L.A. topped the list with more than 1,000 bankruptcies in the first quarter.

Other cities making the top 15 list with the most bankruptcies are Houston, Denver, Dallas, Chicago, Atlanta, and Portland, Ore. "The rest of Oregon" also made the top 15. Though it still made the list, Chicago's bankruptcy rate went down 20 percent, so hopefully the business climate there is starting to heal.

Among smaller markets, the numbers go funny. Worst-small-market Springfield, Mass., for instance, topped the list because it went from a single bankruptcy to 17 -- not really enough data to draw any major conclusions. The market with the highest jump in bankruptcy cases in the first quarter was Manchester/Nashua, N.H., where they had 130 companies go bust.

Equifax did also create a list of the small markets with the lowest bankruptcy rates. And the winners are: Hagerstown/Martinsburg, Md./W. Va.; Gainesville, Fla.; Charleston, W. Va.; Lafayette, La., and the Pensacola, Fla., area.

If you're worried about any of the companies you rely on for supplies going broke, or if you sell to business customers, you can use the  target="_blank"Altman Z-Score to predict the company's chances of becoming insolvent. Or, if need be, you can use it to evaluate your own company's health. You'll need some basic financial figures from the company, but given that bankruptcies continue to rise in many markets, it might be worth the time to look at

How are companies doing in your city? Are you still seeing newly shuttered storefronts? Leave us a comment and tell us whether you think bankruptcies have peaked in your market, or will continue to rise in 2010.