Two Seattle Entrepreneurs Dish on Their Chat With Barack Obama 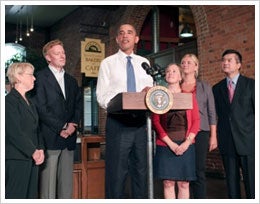 Imagine pulling up a chair in a fine bakery, sipping on a latte...and having a personal, half-hour chat with President Barack Obama about your small-business concerns.

President Barack Obama was in Seattle talking up his stalled small-business lending proposal, which seeks to get $30 billion in new federal funds to community banks for small-business lending.  The meetup was put together by the Main Street Alliance's Washington State chapter, in which the entrepreneurs are active.

Here's the entrepreneurs' report on their presidential meetup. Their main takeaway -- Obama really listened. Turner got the nod to participate after doing a similar roundtable with Murray earlier in the year. Originally planned to include more than a dozen businesses, Turner says she was blown away to learn she'd be one of only three business owners to meet the president.

She says the trio of entrepreneurs got a chance to practice telling their stories to each other while hanging in a waiting room before Obama's arrival. Fugere says one of the Secret Service men gave him the best advice: "All the notes you've brought with you? Throw them away, and just talk about your business."

Obama arrived with his sleeves literally rolled up, and no jacket, ready to hear their stories. Key question Obama asked that both entrepreneurs liked: "What keeps you up at night?"

For both Turner and Fugere, it's their employees. They know one wrong move could impact a lot of lives. Turner also mentioned credit -- her credit line hasn't been cut, but she knows other retailers who've had their business hit by lack of access to credit. Both had managed to get small-business loans to expand recently, but it wasn't easy. Both think the new small-business lending bill could help.

"I talked about tight margins, and competition, and what it's like being the small guy versus the big guys," says Fugere.

Was it all just for show, to help promote the bill? Fugere and Turner didn't come away with that feeling.

"He was interested in our issues," Fugere says. "He's affable, witty, intelligent, inquisitive, insightful and informed. I felt like I was talking to my law professor.

"I told him about how thin margins are in my sector, and when people stop spending, business suffers. We need to get banks loaning to small businesses so they can hire, and people can spend."

"I felt it was a genuine 'How can we help?' conversation," says Turner.

What do you think? Is Obama's concern for real? Will his small-business funding bill help? What would you tell him, if you could get the president's ear for a few minutes?