Tom Chappell launches a sustainable wool comfortwear business with the same social conscience as his Tom's of Maine.

By David Ferrell March 10, 2011
Opinions expressed by Entrepreneur contributors are their own. 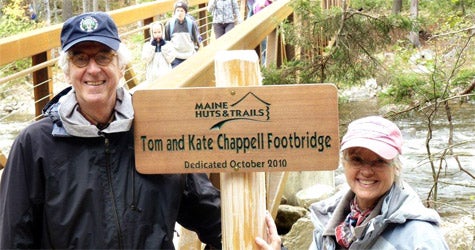 Tom Chappell had scored an entrepreneurial jackpot, selling most of his family-owned toothpaste and toiletries company, Tom's of Maine -- launched with a $5,000 investment in 1970 -- for $100 million. He was rich and free. He immediately flew to Europe with his son, Matt, for a celebratory trek across Wales.

"I craved some physical exertion," Chappell, now 67, remembers of the cold, rain-soaked adventure in 2006, when they hiked 12 miles a day through the verdant countryside. What impressed him were the sheep -- how comfortable they seemed in weather that kept him bundled in smelly synthetics and heavy, scratchy wool. "I certainly had the opportunity to imagine a product that was different than what I was wearing."

Out of those musings grew a new start. "I think he stayed retired for two weeks," laughs his wife, Kate, who had co-founded and helped to build Tom's of Maine into a nationally known brand.

Instead of roaming the world or settling into leisure, Chappell began exploring ways to manufacture and sell light, comfortable woolen clothing in America, an effort that led to the creation of a new company, Ramblers Way Farm, in 2009. The motivation was not money, since the Chappells had more than they needed. The goal, he says, was to remain active and see if he could do again what he did at Tom's of Maine -- build a profitable business that also accomplished meaningful humanitarian work.

"If I wanted to get back into business for constructive, socially responsible reasons, then why not?" Chappell says. "I was not looking forward to a lot of days on the golf course. I didn't want to join other boards of directors. And I didn't feel old enough to hang up my hat."

Ramblers Way Farm -- the company is named after the British term for trekking -- touts itself as environmentally sustainable and operates mainly from a restored colonial office building powered by solar and geothermal energy in downtown Kennebunk, Maine, three doors from the Chappells' home.

Although the woolen clothing line is relatively new, Chappell is already diverting a share of his revenues to one of the causes he cares about -- Maine Huts & Trails, a nonprofit group that is creating a 200-mile network of back-country trails for hiking, snowshoeing and cross-country skiing.

"It's our aim to get people out of the house with their families, out walking in nature," Chappell says. The trail system will feature log huts where hikers can sleep and eat, too. "You get served a meal," he says, "so it's a little more family-style. It's not quite like hiking the Appalachian Trail."

Three huts have been built, and eventually the system will have a dozen, each large enough to house 40 hikers, says Dave Herring, executive director of the organization. Besides donating sales profits, the Chappells sprung for a 200-foot pedestrian bridge now named in their honor. Tom, an avid hiker, already has roamed the trails with friends and family and has slept in the huts, Herring says.

"He's an incredible guy," Herring says. "He has a strong set of values that are synonymous with ours. He's very outdoors-focused and insightful -- and he has a very good sense of humor."

A Portrait of the Entrepreneur as a Young Man
Chappell came to appreciate natural beauty growing up in scenic parts of Massachusetts and Maine. His father, George, patented a chemical treatment process for industrial wastewater, so he began to understand damage from pollution well before the environmental movement. For a time, in their 20s, he and Kate lived in Philadelphia, where Tom sold insurance, but "the entrepreneurial bug was too great," Kate says. They moved back to Maine and Tom assisted for a while with his father's business before going on his own.

Created to market natural toothpaste, soap, deodorant and dental floss, Tom's of Maine would become most notable for its progressive approach to business. The company would eventually channel 10 percent of its profits to causes such as recycling programs and nonprofit dental clinics. Employees were encouraged to volunteer on company time.

A turning point came in 1986, Chappell says, when he enrolled at Harvard Divinity School to get a master's degree in theology. A devout Episcopalian, he split time between the business and classrooms at Cambridge, where he spent four years studying the major religions, as well as philosophers dating back 3,000 years.

He tweaked the company by drafting a statement of beliefs -- the belief in quality, in sharing, in the inter-connectedness of life -- and actively reaching out to organizations such as the River Network in Portland, Ore., which campaigns against pollution. "We would give them $50,000 that they could use in chunks -- $1,000 here, $1,000 there -- to help local advocacy groups," Chappell says. "That money was spread all around the United States."

Contagious Charity
As the business grew, other charities benefited, too. Chappell wrote about his entrepreneurial style in two books: The Soul of a Business: Managing For Profit And The Common Good, in 1996, and Managing Upside Down: The Seven Intentions of Values-Centered Leadership, in 1999.

"That's really what made Tom's of Maine so special, ultimately -- its values," he says. "We built a business in a kind of harmony with society."

The company had reached 150 employees and annual sales of $45 million by the time Colgate-Palmolive Co. negotiated to buy 86 percent of it five years ago. The Chappells, who still hold a 14 percent share, approved the deal with the understanding that Colgate would keep them involved as consultants and continue to support charitable programs.

With its vast resources, Colgate has even expanded Tom's of Maine's humanitarian reach. In December, the natural toothpaste maker announced that it would divide $100,000 among five mobile dental-health clinics to be selected this month by public vote. The company also announced that five nonprofits would share $100,000 as part of its 50 States For Good program. Winners included a community orchard in Indiana, a dog-rescue program in South Carolina, and a vision program for children from low-income families in Alabama.

Repeat Performance?
Chappell says he hopes his new company can emulate such largesse. He envisioned Ramblers Way Farm, which markets everything from panties to hoodies, as an internet-only seller when wool first began flowing from 90 of his own sheep and from sheep ranches in Montana, Nevada and Texas. The first four months, however, were "miserable," Chappell says, and he set out to court retailers. Now the brand is in 115 stores.

"We're beyond the point of survival and starting to get traction," Chappell says. After barely a year, the company has 22 employees, including two of the Chappells' five children. "I'm probably working 50 hours a week, but who's counting?" Tom Chappell says. "When you're building a business, you just have to do the next right thing."

Kate Chappell, a professional artist, is less involved than she was in Tom's of Maine, concentrating instead on her paintings and mixed-media art; her work is part of an exhibit running through March 20 at the New Britain Museum of American Art in New Britain, Conn.

Tom Chappell says he is grateful that she can pursue her passion and he can pursue his. Having grown a business once, he knows what it takes -- and he has no thoughts of retiring, he says.

With a laugh, Chappell says, "If I'm prepared to do my part in staying healthy, and the Lord is willing, I'll sit back when I'm 90."