What Small-Business Owners Can Learn from the Dodgers' Financial Woes 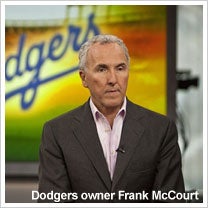 The owners of the Los Angeles Dodgers baseball team filed for Chapter 11 bankruptcy protection Monday, effectively putting off a potential ownership seizure of the team by Major League Baseball.

According to the bankruptcy petition, Los Angeles Dodgers Holding Company LLC -- headed by owner Frank McCourt -- carries as much as $500 million in liabilities and is unable to fund its operations. A Boston real-estate developer, McCourt acquired the Dodgers from News Corp. in 2004 for $430 million.

Despite the large size of the organization, the financial downfall of this storied baseball franchise can offer a number of important lessons for small-business owners. "If this can happen to the Dodgers, it can happen to a small business," says Los Angeles-based bankruptcy attorney Leon D. Bayer, co-founder of Bayer, Wishman & Leotta.

1. Keep personal and business finances separate. Between 2004 and 2009, the McCourt family is said to have taken $108 million in personal distributions from the team to help fund personal mortgages and real estate. A business owner should never remove so much capital that a business cannot maintain its ongoing operations, Bayer says.

"Early success in business can often lead to overconfidence and overspending by the owner," he says. "While they might have impressive cash flow, if they don't keep up-to-date books … they don't know that the business is losing money hand-over-fist, and they're spending borrowed money."

Conversely, it's also a no-no to funnel personal funds into a business to help cover its losses. "What often results is the business fails anyway and the owner loses all his or her personal assets," Bayer says. "Sometimes you have to read the writing on the wall and scale back, shut down or put a business on hiatus when it's failing."

2. Understand the power of a franchisor. Some franchise agreements contain "onerous provisions" that might make potential franchisees leery of buying in, Bayer says. In the case of the Dodgers, Major League Baseball Commissioner Bud Selig last week blocked a $3 billion television deal between the Dodgers and Fox. In a statement, Selig said McCourt's "ideas and proposals," including the deal with Fox, "have not been consistent with the best interests of baseball."

"The commissioner is given virtually unfettered discretion to decide what is in the best interest of baseball and to stop team owners from doing things that, to any other business owner, might seem like an otherwise prudent business decision," Bayer says. "You have to be aware of what kind of power the franchisor has over you and the decisions you make."

3. Don't overstaff. Among the Dodgers' creditors (it has as many as 10,000, according to the bankruptcy petition), former slugger Manny Ramirez is owed the most at almost $21 million. Next up is another former player, Andruw Jones, who is owed more than $11 million.

While baseball player salaries can be debated, the lesson for small-business owners is not to hire too many employees, and not overpay the ones you do hire, Bayer says.

"In my experience, a number of small-business owners want to hire people who they can delegate things to," he says. "But what happens is the owner stops actually managing, and resources often get shifted away from the businesses main goals: Making profits and reducing expenses."