By Jason Fell August 31, 2011
Opinions expressed by Entrepreneur contributors are their own. 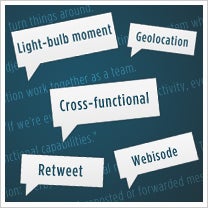 Do you have a "bajillion" things to do? Have you ever had a "light-bulb moment"?

Entrepreneurs need to keep up with the new business-related words and lingo that pop up almost every day. The publishers of the Concise Oxford Dictionary have added 400 new words to the 12th edition of the publication, so we thought it might be useful to take a look at the new terms. Turns out several apply to business.

We've selected the 10 need-to-know new words. Whether or not you start using them in your own business dialogues is, well, up to you.

1. Light-bulb moment
Definition: (noun) A moment of sudden realization, enlightenment, or inspiration.
Example: "Sales at my company were plummeting, but then had a light-bulb moment and knew exactly how to turn things around."

2. Cross-functional
Definition: (adjective) Denoting or relating to a system whereby people from different areas of an organization work together as a team.
Example: "If we're ever going to boost productivity, everyone will need to improve their cross-functional capabilities."

3. Retweet
Definition: (verb) On the social networking service Twitter, to repost or forward a message posted by another user. (noun) A reposted or forwarded message on Twitter.
Example: "My company is blowing up on Twitter. My posts are retweeted constantly."

4. Geolocation
Definition: (noun) The process or technique of identifying the location of a person or device by means of digital information processed via the Internet.
Example: "Business is up at my restaurant since I started this geolocation-based mobile marketing campaign."

5. Contractionary
Definition: (adjective) Causing or relating to the contraction of a country's economy.
Example: "This darn contractionary economy has really stifled my business growth this year."

6. Cyberbullying
Definition: (noun) The use of electronic communication to bully a person, typically by sending messages of an intimidating or threatening nature.
Example: "This person won't stop harassing my business over Twitter. He's practically a cyberbully."

7. Textspeak
Definition: (noun) Language regarded as characteristic of text messages, consisting of abbreviations, initials, emoticons, etc.
Example: "If you even think about using textspeak in our marketing copy, I will not R-O-T-F-L. For the uninitiated, ROTFL stands for rolling on the floor laughing."

8. Webisode
Definition: (noun) A short film, advertisement, or episode of a television series, made for online viewing. A blend of Web and Episode.
Example: "For our next webisode on YouTube, let's think of a way to incorporate customer testimonials."

9. Denialist
Definition: (noun) A person who refuses to admit the truth of a concept or proposition that is supported by the majority of scientific or historical evidence.
Example: "I'm the boss. I'm always right and you know it. Stop being a denialist."

10. Bajillion
Definitiion: (noun) An extremely large number.
Example: "I'm an entrepreneur so, obviously, I have a bajillion things to do."

What new business lingo would you add to this list? Let us know in the comments section below.