Carol Tice
Owner of Make a Living Writing
October 5, 2011 min read
Opinions expressed by Entrepreneur contributors are their own. 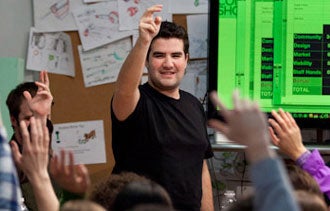 Would-be inventors have ideas for products all the time. But there's a long and treacherous road from that initial idea to having a big-selling consumer item, as the finale of the Sundance Channel TV show Quirky showed.

In the final episode, "Very Messy, Very Fast," two inventors see their ideas go through multiple changes on the way to making it into the lineup of two-year-old online consumer-products company Quirky.

The show also highlights the advantages of Quirky's process. Rather than start up your own company and learn manufacturing and design or pay a marketing firm to bring your product to market, at Quirky you pay just $10 to submit an idea. That idea could end up as a finished product that's been improved by the company design team and their website community.

One of the two inventors featured, Christine Torpey, provides a lesson in the dangers of going the big-spending route. When she comes to Quirky, she is on the financial ropes after having shelled out big to a product-commercializing firm that went bust, leaving her with big loans. Quirky's interest in her all-in-one tray for backyard grilling is her last hope to become a successful inventor before she gives it up and finds a day job.

Her product goes through many versions, as the Quirky design team works on perfecting the look and functionality of the item. They also do something few inventors seem to get around to: Market research.

That goes double for inventor Dave Fulton, who created a combination toilet plunger/snake. When he tries it out on customers and a hardware-store manager, they have an unexpected reaction: Yuk. After the snake goes in the toilet, it retracts inside the plunger and gets stored, filthy, inside it. Without a way to clean the snake off, nobody was buying. The snake also wanted to curl up inside the toilet instead of doing its work.

The Quirky team spends much of the final hour trying to convince Fulton that their adaptation of his idea -- a heavy-duty plunger with unusually good stability and suction -- will work better. But Fulton doesn't want to let go of his original prototype until he sees the customer reaction. Finally, he concedes they've refined his concept into something better.

It's hard to let go of that inspiration you had in the basement. But sometimes, it's got to happen if you're going to end up with a product customers will actually buy.

The other squishy area the show explores is pricing. What will it cost to make the item and what would consumers be willing to pay? At first Fulton's plunger seems too pricey, another reason it needs a rethink.

When it comes to marketing, Quirky can definitely show the inventors a thing or two. The hour-long series, which debuted in August, is basically one long commercial for the virtues of Quirky's process over other methods of getting a consumer product to market.

Whether viewers take an interest in the inventors' products and get a TV 'bounce' out of their appearance remains to be seen. But there's no question Quirky has raised its profile with both inventors and consumers by putting on the show.

Have you tried to submit an idea to the Quirky community? Tell us how it went in the comments section.