Entrepreneurs Risk All On 'Gold Rush Alaska.' Would You?

By Carol Tice November 17, 2011
Opinions expressed by Entrepreneur contributors are their own. 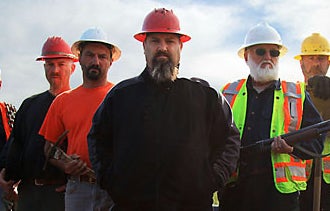 Would you be willing to go all in on your business? Sell everything you own, then move thousands of miles across country in hopes of reaping a big payoff in a new venture? Personally, I'm getting a little sick to my stomach just thinking about taking that big a risk.

If you'd like to see others take high-stakes entrepreneurial gambles, though, nothing can beat Discovery Channel's hit Friday-night show Gold Rush Alaska.

The show, currently in its second season, follows amateur gold miners as they risk it all trying to cash in on today's sky-high gold prices. The show's primary story follows a crew led by father-and-son team Jack and Todd Hoffman, whose gold-mining efforts went nowhere last mining season. The Hoffmans and their friends-and-family team are back this summer for one last try.

The Hoffmans were handed one of the worst setbacks a business could face recently on the show -- the owner of their mining claim gave up on them and gave the rights to another miner. "Dakota" Fred Hurt is now working that claim, leaving the Hoffmans to scramble for another site to mine.

This might be a natural point for many entrepreneurs to call it quits and crawl back to the Lower 48 with tails between legs. But instead, the Hoffmans high-tailed it 600 miles north into the Klondike, where Todd Hoffman secures another mining claim.

It's a high-stakes gamble -- the team has no time to test the soil and takes the owner's word that an area of his gold-rich land has never been previously mined. The team is just not ready to quit, and plunges ahead without any real due diligence on the property.

The extra nail-biter here is that the Alaskan gold-mining season is so short. Each wasted day brings the team closer to the time when the ground will freeze solid and mining will be impossible, until next year. It's already clear that it's do or die for the Hoffmans -- they're tapped out financially and won't be able to come back again if they don't hit a gold vein this time.

The Hoffmans and their crew begin frantically clearing the area they believe is virgin ground, only to have the claim owner's dad show up and tell them they've spent five days digging in the wrong place. Once again, they're back to square one.

Are the Hoffmans just throwing more of their time away on a costly misadventure, or will they pull victory from the cruel jaws of defeat and come home rich? My whole family is on the edge of their seat waiting to find out. If they do, it'll be a turnaround bigger than anything we've seen on turnaround expert Grant Cardone's Turnaround King show, Bar Rescue, or any of the other business-related reality-TV shows.

What will you risk for your business? Leave a comment and tell us about it.