By Mikal E. Belicove February 9, 2012
Opinions expressed by Entrepreneur contributors are their own. 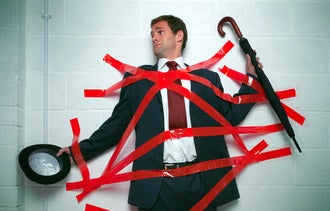 With all the anti-regulation sentiment expressed lately by candidates on the campaign trail and in a dozen and a half debates, you’d think small-business owners would be in agreement that government regulations are destroying their enterprises.

The hue and cry coming off the presidential campaign this year includes rhetoric that blames federal and local regulations for driving up costs, hindering investment, ruining small businesses, destroying jobs and placing a regulatory burden on the U.S. economy.

But is that the way main-street merchants see the issue? Not the ones I talk to in telephone interviews and personal interactions in my travels. The truth is, when it comes to government regulations, small-business owners say they’ve got much bigger fish to fry.

What's more, many small businesses actually value regulations. More than three quarters of the 500 small-business owners participating in a recent survey said regulations are necessary to protect them from unfair competition and nearly as many believe regulations on the books should be enforced. That's according to the American Sustainable Business Council, Main Street Alliance and Small Business Majority, which conducted the survey.

What is really needed, small-business owners say, is more customers. And rather than burdensome regulations, most merchants counter that weak customer demand is to blame for their woes. When asked what it would take to create jobs, these small-business owners said eliminating incentives to move jobs overseas would be at the top of the heap. Cutting regulations came in fifth on the list.

Other findings in the report include:

The candidates and legislators who keep harping about less regulation in government appear to be focusing on something that isn’t the biggest problem. It wouldn't hurt for them to listen to what these small-business owners are saying.

What is the most important problem right now for your small business? Let us know in the comments section.

15 basic tools that you will need for your business

How to Make Pressure Work for You