By Dinah Wisenberg Brin March 5, 2012
Opinions expressed by Entrepreneur contributors are their own. 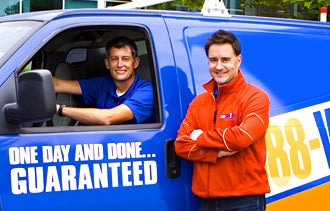 Most people don't stumble across the next big thing when they hire a contractor to paint their home.

Then again, most people aren't Brian Scudamore, the entrepreneur who started 1-800-Got-Junk at age 18 and built it into a $100 million franchise.

Scudamore, now 41, spied his latest opportunity while meeting last year with three contractors all bidding on a job to spruce up his 90-year-old home. One of them, Jim Bodden, won the project because he promised to paint the entire house in a day. "I came home at 6:30 p.m. on paint day and the entire home, floor to ceilings, molding to trim," was done, Scudamore says.

That was enough to convince Scudamore that this house painter should be his new business partner. Scudamore proposed meshing Bodden's 22 years of painting experience with his 22 years of franchise experience. The new company, 1-888-Wow-1Day! Painting, which promises to finish any painting job in one day, was launched in February last year, about 3 months after the men struck a deal.

Wow-1Day "happened in a really serendipitous way. I knew that one day I would discover a second brand," Scudamore says. "I was keeping my eyes peeled so to speak."

The business is now growing faster than Scudamore's junk-removal business, which has expanded to 200 franchises globally.

The one-day painting brand has 10 franchise partners in Texas, California, Kansas, Washington, British Columbia, Alberta and Ontario, and aims to have 50 franchises by year end, according to Scudamore, CEO of both the junk and painting ventures.

Bodden serves as director of field operations and holds a seat on the board, and owns a company franchise near Vancouver. Scudamore has helped with "crowdsourcing" painters and getting publicity.

Scudamore believes Wow-1Day will be bigger than his junk franchise. "We have a huge potential to take a very fragmented mom-and-pop business and turn it into something very special," he says.

The business uses mostly eco-friendly paints, according to its website. A franchisee could pay less than $50,000 in cash to open a location, which is less than the typical fast-food franchise.

Scudamore says picking the right franchisees is critical to success – a lesson he learned when building 1-800-Got-Junk.

He says he's not necessarily looking for experienced painters but "passionate franchise partners" who will bring a new mindset to an industry that's sometimes lacking in customer service.

"The number one lesson we've ever learned," Scudamore says, "is that it's all about people."

Have you ever run across a business opportunity in a similar serendipitous way?