8 Ways to Make a Reverse Mentorship Work for You 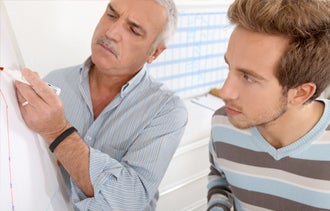 A couple weeks ago, when I needed help figuring out how to convert numbers in an Excel spreadsheet into a multiline graph, I turned to an expert: my 23-year-old daughter.

It took her less than five minutes to show me which Excel function to use. A couple of clicks later, the numbers appeared as a perfectly formatted, multicolor, four-line graph.

It's a small example of the kind of reverse mentoring happening in home offices and much larger workplaces all over the country, with workers actively seeking the counsel of their often but not always younger colleagues on technology and other matters.

This type of peer-to-peer coaching isn't completely new. Former General Electric chairman Jack Welch is credited with popularizing the concept more than a decade ago when he had 500 top executives reach out to younger employees for help using the internet, according to this Wall Street Journal article.

But the continuous march of new technologies into a workplace now shared by employees spanning four generations is spurring more companies and individual workers to seek out these kinds of collaborative relationships to stay current and share information.

Here are suggestions from career and leadership experts on how to start a reverse or reciprocal mentoring relationship:

1. Find a compatible partner. The ideal candidate is someone with skills in areas you're lacking, says Lisa Quast, a Seattle career development consultant and author of Your Career, Your Way! She suggests looking for a partner who's got potential to move up the career ladder faster with a little help from an experienced work friend. Who knows, today's junior associate could be tomorrow's rising management star, and an established relationship with an up-and-comer might be a nice thing to have.

2. Set expectations. Create ground rules for what you want out of a partnership, such as how often you'll meet and what both parties will get out of it, Quast says. Initially, interactions could be about what you want or need to learn. But be open to other benefits, such as bridging not just knowledge gaps "but hierarchical ones as well," writes Charles A. Volkert, an executive director at legal industry staffing specialist Robert Half Legal, in this post.

3. Get your boss's OK. A lot of reciprocal mentoring can happen on an informal basis. But if you want or need to set up a formal program, you'll need your manager's or company's approval. Win it by explaining how teaming up with colleagues from a different department or generation could help you bring a different perspective to business decisions. Also, having a reverse mentor could improve the company's recruiting efforts or boost its reputation in social media circles, Volkert says.

4. Be open to suggestions and criticism. Mark Miller, an executive at the Chick-Fil-A fast-food chain and co-author of The Secret: What Great Leaders Know and Do, started his own reverse mentor experiment recently. One goal is to learn what he's doing wrong, and right, on social networks like Facebook, he explains in this post on his Great Leaders Serve blog. "I'd prefer to learn in days from someone else what I could learn on my own over decades," he writes. "I'm leveraging someone else's talents and gifts. Allowing them to share their expertise and share their passion seems like a good idea to me."

5. Make it more than just about tech. Don't limit your thinking about what a reverse mentorship could be, Miller writes. "Maybe a younger person could help you learn about sushi, Settlers of Katan, popular music, or even how to lead the next generation more effectively."

6. Give as much as you get. The relationship should be mutually beneficial, Quast says. As a more experienced job holder, you could help a younger colleague clarify their job goals and recommend actions they could take to advance their careers. You also can introduce younger workers to key people in your company or industry, she says.

7. Experiment with approaches. If you run your own business, you could start by setting up a reverse mentoring program inside a single department, says workplace communications consultant Linda Dulye in this post on Fox Business' small-business blog. There may be even greater value, however, in starting a program that crosses departments. Dulye's post focuses on the benefits that such arrangements can have for Gen Y workers, who see how their skills and interests might transfer to jobs other than those they were originally hired to do. But the same holds true for baby boomers and Gen X workers, who could use a reverse mentorship to discover skills they didn't realize they had and parlay them into a new opportunity.

8. Don't stereotype. Not every 45-year-old has the same knowledge or expertise, so don't assume every Gen Y worker does, either. Just because someone's a digital native doesn't mean they're a whiz at Facebook, LinkedIn or Pinterest. You could end up teaching a younger associate a thing or two.