Karmaloop's Greg Selkoe on Social Media and the Verge Culture

Next Article Add to Queue
Maria Muto-Porter
April 27, 2012 4 min read
Opinions expressed by Entrepreneur contributors are their own. 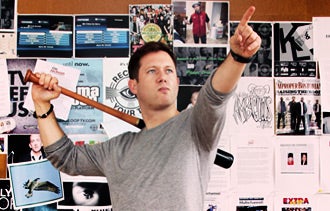 In 2000, when Boston-native Greg Selkoe launched Karmaloop, an online clothing shop for counter-culture fashions, he heard all the naysayers: "The Internet?! Ha! You'll never make money off the Internet!" His timing of course couldn't be worse: He was starting up a web-only commerce site, the dot-com bubble had just burst and he was just 25 years old.

But resilience proved pivotal. And more than a decade later, Selkoe's Karmaloop has grown into a fashion/media powerhouse complete with private, flash-sale site PLNDR.com, Karmaloop Kazbah, a marketplace for up-and-coming brands and Karmaloop TV, a cable channel for technology attuned young people. In 2011, the company reeled in more than $130 million in annual revenue and supports roughly 130 employees in Boston, New York and Los Angeles.

We sat down with Selkoe to find out how Karmaloop has managed to both outlast the dot-com bubble and make a mark in the ever-changing world of fashion. Here are his edited answers to our questions:

What was it like to start up in the fashion industry as a young entrepreneur?

It was fun. But it wasn’t just about fashion. It was about a whole lifestyle -- art, music, video, a community of style rather than retail. At the same time, it was hard living at home and not having money to do what I wanted with the business.

You list your email address and cellphone number on your site. What are the benefits of that direct access? Would you recommend it to all entrepreneurs? It happened really organically. When anyone bought anything on the site, I’d just call them myself and ask them how they’d heard of Karmaloop and they’d get all excited. As for other entrepreneurs, personally I think if you stand behind your product you should be accessible. 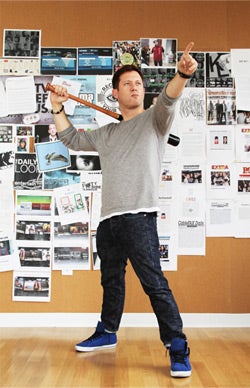 You talk a lot about "verge culture." What is it? And where do you see this group heading in the next five to 10 years? This is the first generation to grow up with the Internet. They think differently. They’re naturally collaborative rather than competitive, they’re creative and connected. They define themselves by ideas rather than more superficial things. I’m excited about where the verge culture is going. I think they'll continue to help the world progress.

Your company has turned in many different directions over the years. How have you managed staff and infrastructure adjustments? Has it been hard to loosen the controls? It’s a challenge and I’m sure I’m making plenty of mistakes. It's common to think that every entrepreneur wants to micromanage. I’ve worked hard to avoid that pitfall that in the end shoots many entrepreneurs in the foot. Besides that, we have a very flat organization and collaboration is really prized here.

What’s the best way you've found to effectively harness social media? You have to look at more than the number of people connected to your company through social-media sites. For instance, do they interact with your posts? For us, it's quality over quantity. We save most of our energy for our reps. Those 100,000 people each reach hundreds of other people in 35 countries and they talk about Karmaloop. They’re cultural evangelists and they want to represent us.

What advice would you give young entrepreneurs just starting out with their own dreams and ideas? Be ready to have a lot of setbacks and times when you think that you’re not going to succeed. You may owe people money and need to explain why the profits aren’t there yet. Still, you have to have a singular vision and believe in your core strengths. Keep picking yourself up and just never quit.

8 Legal Requirements When You Start A Business

Need to Find More Money? Consider These 5 Side Gigs