Is 'Tanning Mom' Another Setback for Sunbed Industry?

By Dinah Wisenberg Brin May 10, 2012
Opinions expressed by Entrepreneur contributors are their own. 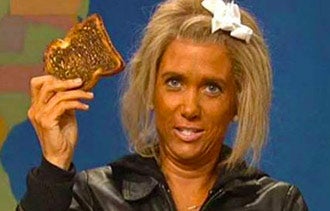 The case of tanning customer Patricia Krentcil of Nutley, N.J., a leather-toned woman charged with taking her 5-year-old daughter inside a tanning bed, might even lift the efforts of a Canadian lawmaker to seek a ban on indoor tanning for children and youths.

Krentcil, now the subject of late-night comedy sketches (that's Saturday Night Live's Kristen Wiig in photo above), a parody action figure and a reported ban from local salons, has denied the accusation and pleaded not guilty to child endangerment.

While the story may be fitting given that May has been dubbed National Melanoma/Skin Cancer Detection and Prevention month, it must be wince-inducing in an industry already on the defensive over the health and safety of its services. The industry includes franchises such as Hollywood Tans, Executive Tans, Palm Beach Tan and numerous others.

The case also might do little to help tanning salons garner support for a repeal of the U.S. tanning tax.

As the U.S. Centers for Disease Control and Prevention notes (and reminded via Twitter about "Melanoma Monday" this week), indoor tanning has been linked with skin and eye cancers.

The tanning-mom story has given health advocates a new opportunity to discourage indoor tanning – especially for young people -- and push for youth bans.

In New Jersey's state capital, lawmakers and health advocates this week tried to rouse support for a stalled bill to ban minors from using tanning salons, according to news reports. The state currently requires those aged 14 to 17 to obtain parental approval to use a salon, and prohibits indoor tanning for those younger than 14.

Among those quoted by the Star-Ledger was Alyson Dougherty, who used tanning salons regularly as a teen and was diagnosed with stage 3 melanoma at 21.

Chicago would ban tanning-salon use for those younger than 18 under a proposed ordinance introduced Wednesday, a local ABC affiliate reports.

Meanwhile, The Canadian Press reports that MP James Bezan wants to ban tanning beds and booths for Canadians younger than 18 years. Bezan says he and his wife, a melanoma survivor, used tanning beds in their youth, and that he is disturbed by the numbers of young people being diagnosed with the disease.

Smart Tan, which describes itself as an education association for the professional indoor tanning community, sent Executive Director Joseph Levy to New York last week for a Today Show appearance in the wake of the Krentcil story. On its website, Smart Tan detailed the story behind the appearance, including its plan "to compare sunbeds with natural sunlight, point out how sunlight is a key element to life on this planet, illustrate that our equipment is just like what dermatologists use but not as intense, show how exposure times are based on formulations from FDA and administered after a careful screening from a certified technician."

The industry trade group Indoor Tanning Association was fighting ban proposals even before the Krentcil story. In March, the group released a statement saying that "the decision regarding whether or not a teen is allowed to suntan is a decision for parents, not government."

The group said, "Right now in the state of New Jersey, a teenage girl can secure an abortion without her parent's consent but if [new ban] legislation passes, cannot get a suntan with her parent's consent. Sixteen- or 17-year-olds can drive cars, get married, own guns, hunt, and secure birth control and abortion services yet if these laws pass, they would not be allowed to suntan, even if their parents approved."

The ITA said proponents of ban laws "always exaggerate the risks of exposure to ultraviolet light in order to get the attention of the public, the media and the government."

Readers, what side do you fall on - should bans against youth tanning be imposed, or does the tanning industry have a point?