By Dan S. Kennedy and Jeff Slutsky May 30, 2012
Opinions expressed by Entrepreneur contributors are their own. 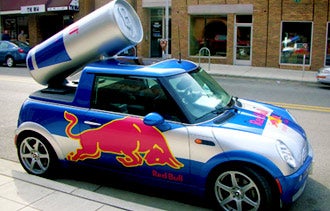 You can easily get free advertising exposure with your vehicles, but being clever with it will get you even more attention.

Driving around town can be one of your best forms of advertising. Consider the experience of Jeff Whiting of Help! Wizards, a Columbus, Ohio, computer consulting firm that makes house calls. In 1999, the company bought its first vehicle. Instead of going with a white van as originally planned, it bought something that would attract more attention. A bright yellow Volkswagen Beetle. The "Help! Wizards" logo is boldly blazoned on both sides of the Bug and their trademark "!" is on the hood. They've since added three more Bugs to the fleet and have two more scheduled to hit the streets soon. The results? According to Whiting, he gets at least one call a week directly from the exposure to the "Wizard Bug."

Speaking of bugs, an independent extermination company in Fort Wayne, Indiana, used an old hearse with a big bug on top as its vehicle. It got a lot of attention, but many customers felt uncomfortable with it in their driveways.

To make a point more subtly, consider vanity tags for your car. The right message can generate some interest. The plates that seem to make the most impact are those that take a few moments to figure out. They engage you, and then once you finally "decode" the plate's meaning, you remember it forever. Here are some tags we've come across:

One of the members of the audience of a keynote speech we gave told us about the man who had one delivery vehicle. A friend who had a large fleet made fun of his single truck. So he had some magnetic signs made with his company logo on it. He also put at the bottom under the logo "Delivery Vehicle #1," which went on the left side. "Delivery Vehicle #2" was placed on the right side of the truck. On the back was "Delivery Vehicle #3." His friend was amazed at how fast his fleet grew. This is a humorous, but important lesson: When considering signage for your vehicles, don't forget to include all sides -- left, right and back.

Related: Is the End Near for Traditional Advertising?

For temporary vehicle signs, consider the use of vehicle magnets. They can be big impact in full color if you want. This is a great way to promote something you do not want to be on your vehicles permanently. You can even run monthly or seasonal promotions. For example, a heating-and-cooling company could produce magnetic signs that promote preseason maintenance of your furnace or air conditioner. The signs are used during the slower time leading up to the busy season when the weather changes.

If your company is sponsoring a local sports team or league, in addition to the normal exposure you get on the jerseys and signage at the playing field, make it part of the deal that team bumper sticks say: "Sponsored by (your company)." Dozens, or hundreds, of cars would provide you additional exposure at no additional cost. This extends your exposure beyond the group itself and may be the tipping point for justifying your sponsorship in respect to return on investment.

Graphics for vehicles can be dramatic, thanks to digital printing capabilities. Your vehicles can become moving billboards, and except for the cost of creation and application, your message is distributed for free. Of course, if you're going to use your vehicles in this way, make sure they are always clean. And when not in use, park them, if possible, in a high-traffic area so they still provide you additional free exposure. And, it must be clear to your drivers that they have to be courteous, no matter what. Even shaking a fist at a lane hog on a cell phone can create ill-will and bad word-of-mouth.