For Windows Users, Microsoft's 'Surface' Might Be Your Next Tablet 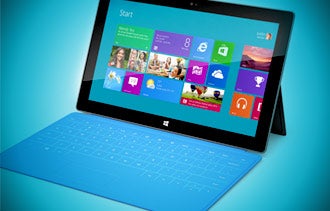 If you're in the market for a new tablet, there's one more device that should be on your radar -- especially if you're a heavy user of Windows-related products. At an event last night in Hollywood, tech giant Microsoft unveiled Surface, a new family of tablet computers it has developed that operates on Windows software.

"It's basically a hybrid ultrabook. If a notebook computer with Windows 8 is worth buying, then this certainly is . . . particularly because of its compatibility with Windows software," says Stephen Baker, vice president of industry analysis for consumer technology, with Port Washington, N.Y.-based research firm the NPD Group.

So far, Microsoft has two Surface tablets. One will run on the Windows RT operating system (OS) and an ARM processor and the other on the Windows 8 Pro OS with an Intel processor. The Windows RT tablet weighs about 1.5 pounds, measures about a third of an inch wide and will come in 32 GB and 64 GB versions. The Windows 8 tablet weighs in at just under two pounds, measures a little over half an inch thick and comes in 64 GB and 128 GB versions.

Two features that are sure to catch the eye of business users: Both models come equipped with a cover that features a built-in keyboard and kickstand. Both also have 10.6-inch displays.

"If you want the ease of use of touch, it'll be there [with Surface]. If you want a keyboard, it's there," Baker says. "And you'll have the value of a lightweight tablet with all the attributes of a pretty decent processor, storage and Windows."

Surface tablets are among few devices for which Microsoft has developed the software as well as the hardware. Other examples include the ill-fated Zune music player and Microsoft's popular Xbox 360 gaming console.

While Microsoft also hasn't disclosed prices for the Surface devices, the Windows RT is expected to be priced similarly to other tablets running on ARM processors, or about $500, Baker says. The Windows 8 Pro model should cost about $900, or perhaps closer to $800 by the end of the year, he says.

Will you consider buying a Surface tablet for your business? Let us know in the comments section below.