Cred, Connections, Cash -- The Workings of a Business Accelerator

Entrepreneurs tend to be stereotyped as headstrong individualists who think they know the best way to do everything. While confidence and determination may be necessary when launching a business, sometimes the most important thing an entrepreneur can do is to talk with others founders and get some advice from experienced CEOs. That’s where a business accelerator can come in.

A business accelerator is an intensive, immersion experience in which an entrepreneur moves into a shared office space with other new founders for a period of time to work under the tutelage of advisors and experts to grow their business rapidly. In exchange for the expert mentoring, exposure to investors and cash investment that entrepreneurs get from the accelerator, the entrepreneur gives a portion of his or her company's equity to the partners of the program and for this reason is often called a “seed” or “venture” accelerator. 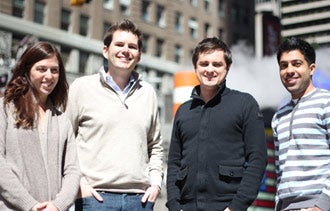 Accelerators are similar to business incubators, but the latter typically don't take equity in the companies, according to the National Business Incubation Association in Athens, Ohio. Accelerator investors often offers between $18,000 and $25,000 in funding in exchange for between 4 percent and 8 percent of each company.

Related: How to Jump-Start Your Business With an Accelerator Program

Giving away a piece of your company to accelerate growth can be a big decision. What can make this trade-off so attractive? To help answer that question, we spoke with several recent participants in the Entrepreneurs Roundtable Accelerator in New York City. Here are five of the program's biggest benefits they described.

1. Networking. An accelerator can help you meet the kind of investors, advisors and other entrepreneurs who are interested in helping nurture startups. Consider Derek Webster, the CEO and founder of LocalBonus, a "shop local" credit-card rewards program. Webster had “big company” experience in the credit-card industry, but he didn’t know the players in the NYC startup scene before participating in the accelerator, which takes an 8 percent equity stake in each founder's company.

At the end of the program's three months, says Webster, “I had a massive number of those one-one-one meetings, so that now I could turn to any one of those people and ask for help."

2. Decision-making practice. One common reason for failure as an entrepreneur is "death by indecision." Being in the accelerator really forces you to make decisions, because you are always meeting with program directors, mentors and investors, says Jonathon Ende, founder and CEO of Bizodo, an online-document builder and management system. At 29, Ende is already on his 15th startup, so he knows a bit about the momentum of getting a company off the ground. “Every week you are checking in with someone. You want to make progress,” says Ende.

3. Founder camaraderie. Being around other founders all day every day is often comforting and educational. At the Entrepreneurs Roundtable Accelerator, the CEOs had weekly meetings together, as did the chief technology officers. “When you are a new startup, there are all sorts of challenges that you face that are relatively common,” Webster says and having an opportunity to talk through those problems was helpful.

For example, LocalBonus CTO Tim Saunders has 14 years' experience as a developer and so when fellow company founders were hiring technology developers, Saunders helped them interview and choose the most qualified candidates. “The day we all moved in felt like the first day of high school,” says Webster. But “very quickly we realized there was more to be gained by helping each other out than anything else.”

4. Testing assumptions. “It is very easy to drink your own Kool Aid, if you will. You believe you have the best idea and the way you have to do it is the best way,” says Ende. But when you are constantly being forced to explain yourself, you end up re-evaluating your business on a regular basis. “Being able to question the assumptions that you have made, what people want, what you are building,” says Ende, results in your business changing for the better.

5. Street cred. “The fact that you have already been through a filtering process” can give you -- and your business -- a leg up, says Webster. At ERA’s demo day, LocalBonus founders met investors they otherwise don’t think they would have had the opportunity to meet. Just to be in the program can be a mark of validation to the community of fellow entrepreneurs and investors.

Related: 9 Cities You Wouldn't Think Are Hubs for Tech Startups

What part of working in an accelerator sounds the most valuable to you? Leave a comment below and let us know.