Diana Ransom
November 13, 2012 5 min read
Opinions expressed by Entrepreneur contributors are their own.

Everyone has a concept of what entrepreneurship is. It's coffee guzzling. It's long nights and working weekends. It's black turtlenecks and hoodies. We have a good picture alright. But do we really know what it really takes to make it happen. . . in Bangladesh? Unless you live there, I'm guessing probably not.

The experiences of entrepreneurs around the world are very different than here in the U.S. And so are the challenges -- and how to meet them. I recently got a glimpse of them at an event called the Professional Fellows Congress, hosted by the State Department in Washington, D.C.

I participated in a forum there last week on young entrepreneurship with George Solomon, the co-director for the Center for Entrepreneurial Excellence and an associate professor of management at the George Washington University School of Business.

Through this event, 240 young people -- and some older -- flew to Washington from countries as far flung as Algeria, the Dominican Republic and Tunisia. They spent five weeks serving in fellowships throughout the U.S. -- where some of them even worked at small businesses and startups for the term. 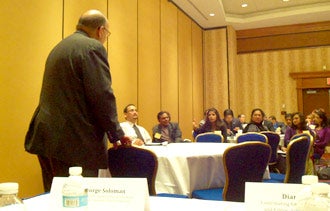 I met them at the culmination of their journey, the time where they were expected to show off what they had learned. What I found out is that the start-up qualms people have in the U.S. are often nothing in comparison to the struggles people in other countries face.

In these countries, concepts like business incubators are really new. University-based entrepreneurship programs are sparse if even available at all. Government bureaucracies are paper-clogged nightmares, and as much as you think the U.S. is too, you're wrong.

One group of entrepreneurs from Bangladesh and Pakistan came up with the idea of launching a biplane-recreation company. They would bring joy riding to Bangladesh, a country, where most citizens until recently didn't exactly have a whole lot of discretionary income. So the idea of having a business based on recreation is considered novel.

Who knows if Bangladeshi citizens are ready for this kind of business, or even if tourists traveling to the country's capital city, Dhaka -- where the biplanes would be housed -- would even consider riding around in a Bangladeshi airplane. But that wasn't what gave me pause. Instead, it was the question of what the government needed to do so that this business could, well, take off.

To mount the regulatory hurdles alone, the founders would likely need to pay $20,000 to $30,000 in fees, according to the group's estimate. These would be annual expenses, they said. So factoring in all the costs to buying a single plane, hiring a pilot, leasing a runway and hanger to house the planes, marketing the business and complying with regulations, the group was looking at a huge capital investment. Could they make it up through sales, even as more Bangladeshis enter the middle class? The jury is still out, but it doesn't look likely.

Another group, whose members are from Israel and North Africa, presented similar challenges. How do they get a business incubator that recently launched in Algeria to become successful? What could their business incubator do to support entrepreneurship when people in the country aren't used to getting any help? Also, how do they encourage people to use their services when business incubators are so new that would-be entrepreneurs don't know what they are? "All they see is chicken," one group member said, pointing to the problem as a chicken-without-the-egg conundrum.

Here's what sets the U.S. apart: There's already an entrepreneurial ecosystem in the U.S. Many states and big cities here like to claim they are the best locale for startups. But the truth is that the entirety of the U.S. offers a better ecosystem for entrepreneurs than many countries elsewhere around the globe.

The reason? To have a thriving entrepreneurship community, you must have the cooperation of the government -- from having smart regulations that don't unduly burden businesses to helping commercialize government-sponsored research to supporting the vital small-business loans necessary to launch.

To be sure, the U.S. has had much more time to encourage the growth of the nation's entrepreneurial ecosystem than other countries. In the 1970 and 1980s, the concept of entrepreneurship was just being hatched, said Professor Solomon. It's been growing by leaps and bounds since, of course. By contrast, entrepreneurial ecosystems in many other countries aren't established yet. They haven't developed a support system at government agencies, universities or among the private sector.

So, just as it is with any large-scale change, the ability to embrace entrepreneurship globally -- and with fervor, as it has in the U.S. -- will take time. In the meanwhile, as Solomon pointed out: institutions can change if you push them.

Consider the political football small businesses became during this past presidential election. Or even look at how the study of entrepreneurship and social entrepreneurship has caught on across the U.S. "Students demanded these classes," Solomon said, adding: You must demand them and other support systems too.