Can Your Startup Snare the Likes of Billionaire Investor Richard Branson?

By Dinah Wisenberg Brin November 24, 2012
Opinions expressed by Entrepreneur contributors are their own.

It’s no secret that having an appealing product or service is vital for any entrepreneur. But having a great story and an ability to shout it from the rooftops may be almost as important in giving a new venture a leg up.

By both measures, MySocialCloud.com, an online platform that allows users to manage all their login information and bookmarks in a secure place in the “cloud,” appears to be making strides.

Over the summer, YoungEntrepreneur.com published a piece -- “How Young Entrepreneurs Turned a Tweet from Richard Branson into $1 Million” -- about the startup and its college-age brother-and-sister founders. The pair -- Scott and Stacey Ferreira, now 21 and 20, respectively -- became the subject of interest after securing a nearly $1 million investment from Sir Richard Branson and long-time venture-investor Jerry Murdock. The young founders responded to a tweet inviting people to meet the eccentric entrepreneur and Virgin Group founder if they’d donate $2,000 each to his charity. 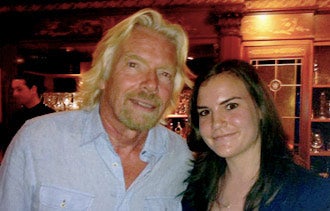 MySocialCloud co-founder Stacey Ferreira responded to a tweet from Richard Branson to meet the billionaire in Miami. Two months later, he became one of the company’s investors.

Branson and Murdock’s investments helped accelerate MySocialCloud.com’s growth. And the publicity surrounding the fairytale story has worked a magic of its own.

Though still in beta, the site, which offers automatic-login access to a person’s web accounts and allows them to make picture lists of their favorite things, has seen a big increase in users since theYoungEntrepreneur.com article, says Stacey. She notes that both Branson and YouTube star Dylan Gardner use the site for branding purposes, while students use it to store research for school projects, adds Stacey.

“We’re looking to hit 100,000 [users] by January 1st,” says Stacey whose company launched in June. And they’re not just welcoming college kids, as they initially intended. “We’ve realized it’s a product for anyone who has (multiple online) user names and passwords,” she says.

MySocialCloud is also working with companies to enable employees to store information on the platform. The business, which also has received an investment from Photobucket co-founder Alex Welch, is looking at raising a Series A funding round, says Stacey.

What can other entrepreneurs learn from the Ferreiras’ right-place-right-time start-up adventure?

“It almost sounds like a Cinderella story, this kind of thing happening and getting noticed,” says Andy Smith, principal of Vonavona Ventures, a Lafayette, Calif.-based consulting and advisory practice focused on startups.

“The challenge is making it repeatable,” says Smith who also co-wrote The Dragonfly Effect: Quick, Effective and Powerful Way to Use Social Media to Drive Social Change.

Entrepreneurs with a strong product or service still have to figure out how to rise above the pack. For the Ferreiras, it started with Stacey’s response to Branson’s tweet, in which she explained that she and Scott weren’t old enough to drink alcohol but would love to meet the one-time teen entrepreneur at his cocktail party.

Others can look for opportunities to make similar connections. They might grab a celebrity or entrepreneur’s gaze with tweets mentioning that person’s name or use hashtags likely to attract the attention of someone in a position to help, Smith says.

“Often it’s the strength of a good product… or simply making sure it stood in people’s minds,” he says. Sometimes standing out is more important than being the best, says Smith.

Entrepreneurs also should be prepared to demonstrate their product once that connection is made. The Ferreiras already had a MySocialCloud prototype, so they could send links to Branson and show it to Murdock when he visited.

“Increasingly the bar is very high,” Smith says, noting that few investors want to fund businesses now without trying them first. Entrepreneurs need to make sure every link and other element of the business is working when a potential backer is exploring the company, he adds.

Still, if you can swing it, nabbing a celebrity endorsement or backer, especially from a high-profile, savvy businessman like Branson, is invaluable. Celebrity endorsements and media attention provide credibility and validation, Smith says.

“Everyone would like to be like Richard Branson,” a billionaire entrepreneur who’s seen as fun, nice and as someone who seems to have not played by the rules, Smith says. “He gets particular credibility.”

How have you tried to stand out among high-profile celebs and investors? Tell us your tale in the comments below.