By Jenna Schnuer December 18, 2012
Opinions expressed by Entrepreneur contributors are their own.

The ability to put a new spin on the old: That's what catapulted Jason Lucash and his business partner, Mike Szymczak, from aspiring entrepreneurs to creators of one of Time's 50 best inventions of the year in 2009. Each year since then, their Costa Mesa, Calif.-based company, OrigAudio, has doubled its sales.

Tired of lugging bulky audio players around on business trips while working for JanSport, the duo started futzing with the idea of putting speakers into Chinese-food takeout boxes. The boxes start flat, and "whenever you want to use it, you pop it up," Lucash says. The idea sounded good. The product? Not so much. They moved on to putting a very old idea--origami--to work. In 2009, with $10,000 in seed money from Lucash's mom, the two launched OrigAudio (origami + audio) with one product: speakers, made entirely from recycled materials, that come flat and fold together. "The Chinese takeout box concept inspired us, but origami is what powered us," Lucash says.

The two were selling 15 pairs a day through their website when the U.S. Marines placed a whopping order for 50,000 (launching OrigAudio's corporate gift division). Shortly after, Time waved its magic "best" wand. With the holidays coming on fast, the company quickly sold out of its stock of 25,000 units. That's when Lucash and Szymczak gave their two-week notice to JanSport.

OrigAudio's volume has been turned up ever since. Now with nine products and 14 employees, the company had 2012 sales of $4 million. The products are carried in mass-market retailers and sold online through multiple merchants. And, in a rare move, QVC approached OrigAudio about selling its wares after seeing them at the Consumer Electronics Show. 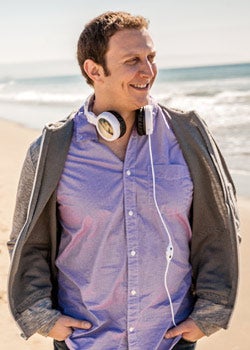 OrigAudio's top-selling product, at 750,000 units, is the Rock-It, which makes a speaker out of pretty much any object you clip it to. It's another example of the old-made-new strategy. The "really cool" technology, Lucash says, had been around for 60 years, "but we always saw these big applications of it. So we were like, This thing would be sweet if you could make it portable."

Perhaps most appealing about Lucash is his desire to teach entrepreneur wannabes, even while he has his own business to maintain. He frequently steps up to podium mics to make sure college students get an earful of the types of lessons he didn't get as a managerial economics major at the University of California, Davis. In time, he hopes to go back to school himself and get an MBA so he can teach marketing classes. "I just like educating. I want people to get something out of it," he says.

One of the biggest lessons Lucash has learned on his own? "There are so many people that rely on you. We're supporting 12 other people," he says. "You want to make sure the company is going to do well to keep your employees happy and keep them financially secure, and that's very challenging. They don't teach you that in school."