One day in 2011, three internet entrepreneurs set up a meeting with three cab drivers in a London cafe. Many hours later, they emerged as the six founders of Hailo, a mobile app that connects taxi drivers with passengers.

One of the 'treps, New York native Jay Bregman, harbored a near-obsession with the "fundamentally inefficient" taxi industry that stemmed from his previous venture, a highly successful same-day delivery company.

During that fateful meeting, the three cabbies--with half a century of driving experience among them--provided insight that led to Hailo's unique solution: approaching the industry from the driver's perspective. "What we discovered was that in order to create the best passenger experience, we needed to focus on creating first the best driver experience," Bregman says.

Hailo's free driver app includes a location-based social network for taxi drivers, digital logbook and enterprise resource planning statistics. But the most important feature is a news feed where drivers can update their status, providing other cabbies with important information such as where more taxis are needed and which streets to avoid due to traffic. "We can get tens of thousands of drivers using this system before they ever accept a single customer," 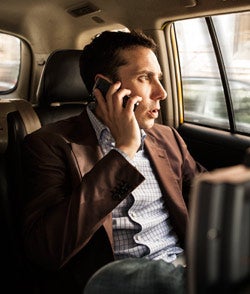 Bregman says. "That means by the time we have our first customer come onto the network, we nail that first-time experience." And they are nailing it: Hailo's passenger app boasts five-star ratings in the App Store and on Google Play from a combined 8,000 users.

The company launches the free passenger app once Hailo reaches a critical mass of drivers (the number is different in each city). Users can hail a cab and then pay for the ride with credit-card information stored on the app; a receipt is automatically e-mailed. In the U.S., passengers are charged a "Hailo fee" ranging from 99 cents to $3, depending on the city and time of day. In international cities where fares are higher, such as Dublin, Hailo charges drivers a 10 percent commission.

Hailo's aim is for passengers to be able to get a cab in two minutes, with two taps--a goal it has already achieved in London, where the service launched in November 2011. It is now the world's widest-reaching taxi app, operating in eight cities--including New York, Boston, Chicago, Toronto and Madrid--with Tokyo on deck for later this year. Hailo has received more than $50 million in funding and has facilitated rides for 3 million passengers from 30,000 registered cab drivers. Up next? World domination. Bregman says the platform has the potential to go beyond the taxi industry and create community networks to address inefficiencies in other markets. He won't share details, but says new offerings could be available by the end of the year.

Flash Valet
The Flash Valet app streamlines the valet process by allowing customers to pay by phone and to text for their cars when they're ready to leave a venue, rather than waiting in line outside.

Moveo
Antro Group's Moveo: No parking necessary; this sleek electric scooter folds up to look like a rolling suitcase.

Plated
Plated: Time-starved home cooks can toss the delivery menus; the company drops off all the premeasured fixings necessary for a rotating selection of chef-designed recipes.

CouchCachet
CouchCachet: Hibernate shamelessly with an app that checks you in at cool events and shares tweets and Instagram photos on your behalf--all while you're vegging on the couch.

ZBoard
Segway for hipsters: Lean forward to accelerate and lean back to brake on the ZBoard, a weight-sensing electric skateboard.

Washio
Washio is Uber for dry cleaning and laundry: Use the company's site to schedule a 30-minute window for pickup; you'll have your clothes back within 24 hours.

Beautified
The Beautified app finds same-day openings at salons near your current location, allowing for instantaneous booking of beauty appointments.

5 Strategic Use Cases for Software in Your Business

Why Unified Communication Is Essential to Working With Remote, Offshore Teams