When Kat Cole traveled to Egypt with the international director of Cinnabon last year and the call-to-prayer came on over the speakers, she stopped and said, "That is so beautiful." The Egyptian franchisee she was with turned around, looked at her and said, "What?" Cole repeated herself. Stunned, the franchisee continued: "I have never, ever heard an American say that in my 40 years of doing business with Americans." Cole was shocked. No matter what your beliefs about religion, the chant, says Cole, is melodic and gorgeous. Cole's relationship with the Egyptian businessman instantly changed. "All of a sudden, it was like I was family."

That moment encapsulates a lot about what is at the center of Cole's belief system about people and about how to do business: Focus on the positive, even across a wide experiential or cultural background. By focusing on the good in a situation or in a person, Cole says she sees possibility where 99 percent of human beings do not. That's true in Africa, where she spends time doing humanitarian work. And it's also her philosophy in the boardroom, where she leads expansion projects in countries that find it taboo for women to be doing business at all, and where she – a former Hooters girl – often manages men much older than she is.

"That's always been my thing: I can see the possible in people and situations where other people can't. And because I can see it, I can help other people see it," says Cole. Her strategy of looking for the good in people has been consistently affirmed throughout her career, as in Egypt, with the Cinnabon franchisee. "When I see people, everyone, every human, I understand that I am in the presence of greatness. Maybe potential greatness, or greatness unpolished, or greatness unfound, but every person has the ability."

Related: After $2.3 Billion Sale, Entrepreneur Shares the Secret to Growing His Business

Cole's belief system has carried her far. She started selling beer and chicken wings at Hooters in Jacksonville, Fla., her second job, when she was still in high school. Her mother was raising three kids alone on an administrative-support role salary, so Cole was also working at the mall at the time. Cole was the first of her family to go to college and started working on engineering coursework at the University of North Florida, but dropped out – much to her mother's dismay – because Hooters was sending her all over the world to open franchise locations. But Cole couldn't get enough of the international business experience. It was all so new and thrilling. When she was asked, at 19, to go to Australia on her first assignment, not only had Cole never been out of the country, she had never been on a plane. Her only trip out of Jacksonville until that point was to Savannah, Ga., on a girls trip in high school.

Cole was taking in close to $45,000 a year as a Hooters girl when she accepted her first corporate job with the company in Atlanta, which only paid $22,000. The pay cut was worth it to Cole to get her foot in the door. She rose through the corporate ranks so quickly that that by the time she was 26, Cole was an executive vice president. Mind you, this all is without a bachelor's degree.

Cole was impatient with the college coursework but knew she needed to get an MBA to continue climbing corporate ladders. She applied and was accepted to Georgia State's executive MBA program, without ever going back to finish her bachelor's degree. While an exceptionally rare option, some MBA programs will allow experienced students to enroll even if they have not finished college. To be admitted, Cole sought out letters of recommendations from 10 CEOs, including Ted Turner, founder of CNN.

Three years ago, Cole, now 35, accepted the role as president of Cinnabon, the sweet-indulgence franchise with 1,100 stores in 56 countries and which is approaching $1 billion in annual sales. Cinnabon is owned by Focus Brands, the umbrella company that also owns Carvel ice cream, Schlotzkey's sandwich shop, Auntie Anne's pretzel company and Moe's Southwest Grill. In her time at Cinnabon, Cole has advanced the company's licensing programs with other franchises, including Cinnabon Delights at Taco Bell, Minibons at more than 700 Burger Kings and International Delight creamer that tastes like the company's famous cinnamon buns.

Cole's rise from Hooters Girl to president of a multinational company in under two decades is the kind of story that elicits impressed eyebrow raises at cocktail parties. While Cole isn't the stereotypical entrepreneur, she is an entrepreneur in her own right – an entrepreneur of her own career.

From jumping on a plane to Australia to launch a Hooters franchise at 19 to taking getting her MBA without having a bachelor's degree, Cole always finds a way to see the possibilities in every situation. Seeing the good in people and situations is how she runs her career and her businesses. "The domino effect of every human interaction, it goes somewhere. And so if you can be a part of seeing what's possible and helping other people see what's possible or just helping them lean in a more positive than negative in any given moment, the trajectory that you put the whole world on, is pretty phenomenal," she says.

In addition to pushing people to the see the positive and the possible, here is Cole's advice for other like-minded, entrepreneurial, young go-getters. 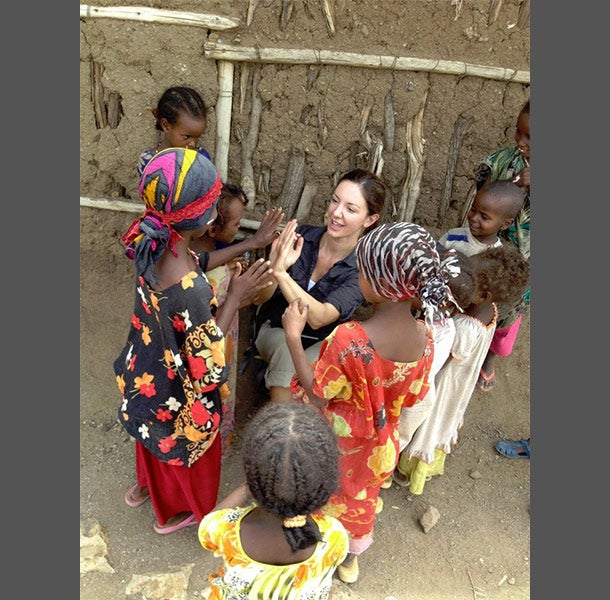 1. Never say no to an opportunity. When Cole was recommended to go to Australia with the Hooters international expansion franchise team, she didn't have a passport to leave the country. So she asked for a day to think about the offer. She flew to Miami that next day, waited in line to get a passport and flew back to Jacksonville. The next day, she called the Hooters corporate office. She told them, "The answer is yes, I can go." She says the managerial team who hired her never knew about her little day trip. "They never knew I had flown to Miami. They never knew I didn't have a passport," she says. "A couple of days later, I flew to Australia."

2. As a leader, listen really closely to your employees. When Cole's mother decided to leave her father, Cole's first thought, at age nine, was "What took you so long? It's about time." When you are the leader, you sometimes are the only one with the authority to make a tough call, says Cole. But you want to avoid being in the position of having all of your employees thinking, "What took you so long?" When you make a tough call as a leader, "there are usually lots of people around you who have known that is the right thing to do for a long time," she says. "The key, in business and in leadership, is staying really close to the other people who kind of know what is going on so that it doesn't take you too long for you to figure that out."

3. Gratitude is good, but in moderation. Cole has been nothing but grateful since landing her first job at Hooters. But if you get too thankful for what you already have, it can hold you back from dreaming bigger, says Cole. She learned at an early age to think boldly, watching her mother leave her father, despite having only a small salary to support three girls. Be thankful for things not being worse, but never be afraid to work to make them better, Cole says.

4. Donate your time. It will come back threefold. When Cole was rising through the ranks at Hooters, she volunteered in numerous food-service organizations outside of the company, including the Women's Foodservice Forum, the National Restaurant Association and the Georgia Restaurant Association. She also did political advocacy work for the restaurant industry and supported various committees that developed industry resources. Later, Cole's extensive folder of MBA recommendations included one from Ted Turner, whom Cole had met and worked with at the Georgia Restaurant Association. "The reason all these CEOs were willing to write recommendations for me is because I had given of myself for a decade. I had volunteered," she says.

5. Find a way to see every challenge as a chance to learn. When the owner of Hooters died suddenly of a brain aneurysm at 69 and his estate had to be liquidated, Hooters had to sell itself. While Cole was already aggressively interviewing for her next opportunity to run a company, she made the decision to stay at Hooters because she knew that having a front-row seat at the table when a private company was sold would be incredibly educational. "I would go to class one day and I would learn about transactions and I would go to work on Monday and be in the middle of the transaction, and I would think, "Thank God I went to class,'" says Cole.

6. Don't remind your colleagues that you are young. If you are leading and managing people who are at least a decade older than you are, you need to dress professionally, speak professionally and don't get drunk at corporate functions, she says. "I would always dress on the more professional end of the attire spectrum. I would wear dresses and blazers all the time when everyone else was in t-shirts and polos," says Cole. "It would help the fact that I was a young, former Hooters Girl, not be front of mind. It was always "back there' in their minds, but if I didn't do things to remind them of that, it helped."

7. Think bigger. Always think bigger than you even think you should. Cole is an advisor to several startups and she says that her most valuable advice is to always make more grand goals, shoot higher and reach further. "Even those people who have the good ideas, they hold back sometimes," says Cole. When mentoring young entrepreneurs that Cole says become intimidated by risks, she tries to reframe the discussion to what is possible and not focus on the risks. "That puts your mind in a place where I think you act differently."

Related: Fran Tarkenton on Winning as a Self-Taught Entrepreneur 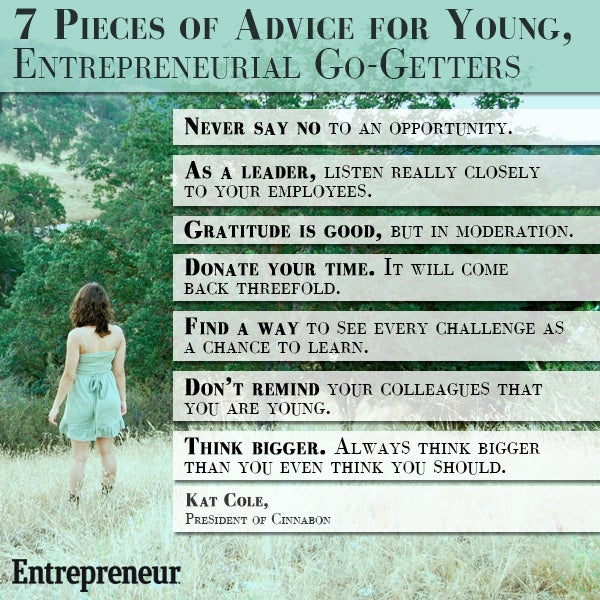