By Shira Lazar July 10, 2013
Opinions expressed by Entrepreneur contributors are their own.

Sometime around 2007, we all fell in love with Funny or Die's Drunk History, the half-hour web series that set a new, inebriated model for recounting and recreating historical events using the storytelling skills of drunken comedians. The series has starred celebs including Funny or Die co-founder Will Ferrell, Don Cheadle, Jim Carrey, Ryan Gosling, Jack Black, Zooey Deschanel, John C. Reilly, Michael Cera and Danny McBride, among others.

Here, Derek Waters -- the creator of the series, which this week made its leap to TV on Comedy Central -- explains how wacky ideas (floaters optional) can lead to creative projects that may just change the course of a business and history. George Washington would be so proud.

Q: Were you drunk when you came up with this idea?
A: I’d be lying if I said I hadn’t been drinking, but I wasn’t drunk. I was having some drinks with my friend, actor Jake Johnson (Fox's New Girl). We were talking about our mutual love for the singer Otis Redding, who died tragically in a plane crash. Jake started telling me that Otis knew he was going to die just before he got on the plane. He was so passionate about how Otis told his wife to take care of herself, because he’s “got to go away now.”

I started imagining it reenacted with Otis Redding looking at the camera as if to say, “I had no idea I was going to die man. Shut up.” I thought about it for a while, and realized it would be even better to reenact drunk versions of true stories from history. I kept picturing the assassination of Lincoln with a drunk person saying, “and then John Wilkes Booth said to Lincoln…die you piece of shit!” I pitched the idea to a couple people who were interested but confused. It really isn’t an idea that reads well on paper. Jeremy Konner, who became the show's director, was the only one who was up for trying it out. 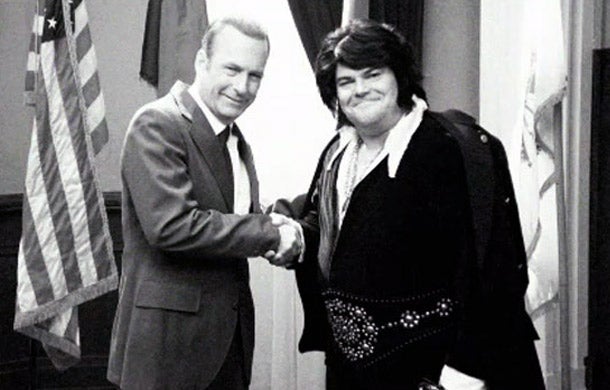 The series debuted with its rendition of Elvis, as portrayed by Jack Black, crashing the White House to meet Richard Nixon.
Image credit: Comedy Central

Q: Is being drunk the key to coming up with great wacky ideas?
A: I wish, but I think most drunk ideas sound good until you sober up. I don’t think how you get the idea matters as much as whether it is smart, hasn’t been done before and includes Michael Cera.

Q: Based on the success of Drunk History, what's the key to getting videos shared and finding success online?
A: I was always hesitant to put Drunk History online. I was nervous about putting something I loved up for judgment from anyone who had the internet or a season pass to their local internet café. But I got over my fear and you should too. Make something new and include someone people are familiar with, someone you like and someone who understands the tone of what you want.

Q: What lessons did you learn from creating this brand and how do you hope to translate this to TV?
A: Stick to what you like but remember why you like it. Don’t change your voice. Make something that you truly love and believe in. You will have the best chance that other people will love it too. I’ve learned a lot about TV, history and interacting with drunk people.

Q: What advice would you give brands trying to get noticed through social media?
A: Think of a good idea before you think of the hashtag. Be yourself. Young people can smell advertising a mile away. Surprise people. Everyone loves to be surprised. Yep. Everyone.

Q: There are so many new places to post content. What's your social network of choice and why?
A: I think Facebook is good to get support. Twitter is a good place to yell and Instagram is a great place to brag. I don’t have a preference. They all make me a little nervous about how influential they are now. Remember, when the best advertising was by word of mouth? Now, it’s picture to eye. Not sure we’ll need to talk out loud in a couple years.

Q: What historical event would you never spoof and why?
A: Some people will be more sensitive about any particular topic than others, and you just have to be mindful of using the comedy to help share a story, not make fun of what happened.

Related: Social-Media Maven Amy Jo Martin on Working Hard and Being a Renegade

Q: What’s next for Drunk History? Merchandise deals, a kid’s cereal, feature-length movies?
A: I WOULD LOVE A DRUNK HISTORY VIDEO GAME. It would be just like Rock Band but you get drunk and tell a story into a microphone. Then your favorite actor moves his lips to your voice. Or I would love to open up a Drunk History attraction at Disneyland. It would be like the Hall of Presidents. Their speeches would be harder to understand, but a lot more fun to listen to.

--This interview was edited for clarity and brevity.