By Chris Newmarker October 29, 2013
Opinions expressed by Entrepreneur contributors are their own.

Kyle Richey is a millennial in the truest sense of the moniker. The 27-year-old Troy, Ohio resident isn’t just an early adopter of technology, however. He's wants to create it too.

“I love apps. I have downloaded so, so many of them,” says Richey, who started out in entrepreneurship with a web marketing company called Conquer Apathy in 2006.

Richey says his first business Conquer Apathy earns six figures annually. But rather than use the profits to splurge on himself and his family, Richey two years ago decided to turn his mobile-app addiction into a mobile-app enterprise called Pure Signal.

The company's second app, Slide Contacts seeks to be “the fastest way to call, text and email the people you talk to most” with a one-step sliding motion, according to Richey.

An industrial and systems engineer by training, Richey couldn’t help toying with the design of the apps he’s encountered, trying to optimize the user experience. “Industrial engineers make things better. The optimization thing is in my blood,’” Richey said.

With Slide Contacts, users can see their associates in a "favorites" list, and slide right on a contact to call them, slide left to text message or slide way left to email. (Check out this quick tutorial.)

Market opportunity
A review from Appsfire, an app for discovering other apps, helped spur 12,000 free downloads of Slide Contacts when it first hit the App Store, Richey says. 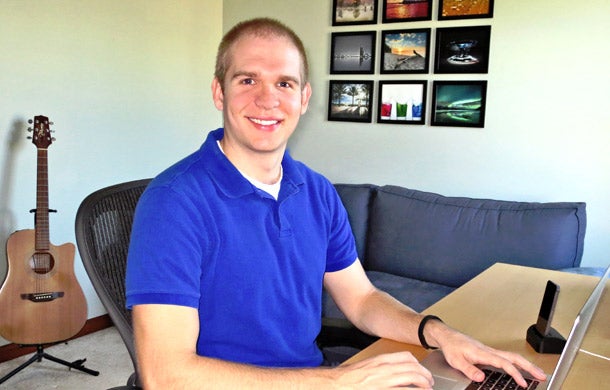 Slide Contacts has since been selling for 99 cents a pop, and has more than 15,000 users.

“All the positive feedback emails have been very encouraging, especially the people that have put it in their dock. … I’ve noticed a lot of people saying they’ve completely stopped using the phone and messages app on their home screen,” Richey says.

He suspects that it is not as much an app for social networking, the app’s original category, in which it reached No. 6 in the App Store. Rather, Slide Contacts is more a time-saving tool for people who are juggling work and family commitments. It has since been moved to the productivity category.

“It’s productivity all the way,” Richey said. Plus, he’s found that users really like the “cool” factor of the app’s sliding gestures, minimalist design and 10 themes to customize the look and feel of the interface.

With Slide Contacts, he says he has been much more conscientious about getting his idea validated. For instance, he tapped his friends and family and of course random strangers to test out the app.

“The validation is key," says Richey. "Show people the prototypes. Ask people a bunch of questions."

Strengths
Seems simple enough, but Richey has proven himself to be a strategic thinker. He started Conquer Apathy two years before his college graduation, and then flipped the profits over to his new Pure Signal venture in 2011. He learned from the stumble over CalcForm.

And Pure Signal already has a beta version of a goal tracker app called Strides that has been quietly selling for $2.99 in the App Store with little to no promotion. The official launch of Strides is planned for December, before the New Year’s resolutions season, and a web version is in the works so users can sync their goals across all their devices.

Related: In Mobile Gaming, the 'Eyes' Have It

Even so, the task at hand is Slide Contacts and how to position it. One possibility could be to give it up for free, then sell premium versions of the app with more customization options. “We’ve talked about doing it as a mass market thing,” Richey says.

What do you think he should do? Let us know with a comment below.

Chris Newmarker is a professional journalist of more than 12 years. His focus in recent years has been business and technology. He is based in Minneapolis, Minn.

Accessing Web 3.0 With a Click: Toolkits for Blockchain Adoption

Are You Really Listening to Your Customers? Probably Not, But You Should.