From Independent Business Owner to Franchisee

By Jason Daley April 12, 2014
This story appears in the March 2014 issue of Entrepreneur. Subscribe »

Don Robinson began working for Papa John's pizza when he was 16. At the time, the company had only three locations, but the high-schooler was so impressed by the operation that he tried to become one of the company's first franchisees.

Papa John's wasn't ready for that, so 30 days after graduating in 1987, Robinson opened his own pizza restaurant in Corydon, Ind. He ran his shop for 13 years, expanding to four locations. But he yearned for a change of pace. "The pizza business was nights and weekends, and I wanted a different life," he says.

A friend introduced him to Craig Dunaway, owner of four Penn Station East Coast Subs shops. The two hit it off, became partners and expanded to 14 units. But after a decade, Robinson wanted another shot at independent restaurant ownership, so he quit Penn Station and developed a chicken restaurant called Cluckers. It expanded to three locations, but Robinson wasn't satisfied. The relationship with his partners wasn't as rewarding as his time with Dunaway had been. Developing a concept was extremely stressful, and he realized that being a franchisee played to his strengths. Robinson sold Cluckers to his partners and rejoined Dunaway at Penn Station. Now they have 15 locations in the Louisville, Ky., area.

We talked to Robinson about the difference between independent ownership and franchising. 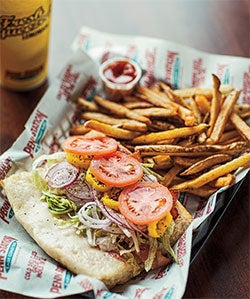 Why did you build--then leave--Cluckers?
Everyone wants to open a restaurant, but not everyone understands what goes into owning one. I was inexperienced when I first owned my pizza places. I had no budget, and I was just winging it. But I was young and could outwork my problems at that point.

When I started Cluckers, I didn't appreciate what truly goes into building a concept. You have to develop support systems; there's real intricacy to building a menu. You have to negotiate contracts with vendors and design the kitchen. I think those things get lost when comparing independents to franchises. When you're a franchisee, you're not reinventing the wheel. When you're an independent you can't call up corporate or a fellow franchisee to help guide you through all the decisions you have to make.

I realized that a franchise system is better for my management style. I'm an operator; I have been since I was 18. I'm great at building a team and creating a culture and developing personnel. One of my weak-nesses is the back end. Franchising lets you do what you do well and gives you guidance on what you don't do well.

Did your franchise experience influence Cluckers?
It was absolutely a model for Cluckers. I took a lot of what I learned at Penn Station and applied it. We opened at high volumes at all three of our locations, and I think the policies and procedures I learned from Penn allowed us to do that. The problem was, I thought I had the time and wherewithal to run one restaurant. But we had such success out of the gate that we quickly opened two more equally successful units. That's when my partners and I realized we had different management styles.

Has the restaurant world changed since you started?
Definitely. I think if you want to have the opportunity for success you have to have a well-thought-out plan. You have to prepare yourself heading in. Back in the late '80s and early '90s you could wing it, because the chains weren't as strong. Now, if you want any chance at success, you have to think like a chain and work like an independent. It's really tough. There are fewer and fewer successful independents fighting for the same dollars as the chains these days.

How has independent ownership influenced the way you run the franchise?
Penn Station was developed to have the owner behind the counter. We preach the ownership mentality all the way down to the general manager level. We give our managers the chance to operate our stores like owners. They enjoy the rewards of shared profit when things go well, and they feel the pain if they schedule someone making $10 an hour longer than they should. I understand, because I've been there--I know the joys and heartache of ownership.

Do you think you'll get the itch to open another independent restaurant?
Absolutely not. I went out and found myself and realized I had to get back to franchising. I'm a true franchisee at heart.

5 Sales and Marketing SaaS Solutions That Will Empower Franchise Owners

This Family Wanted to Own a Business That Got Them Excited, So They Opened An Urban Air Adventure Park