George Orwell said in 1984, “If you want to keep a secret, you must also hide it from yourself.” Or, if it’s absolutely gnawing at you and you can’t keep it inside another minute, just say “screw it” and set it free -- anonymously on Secret, Silicon Valley’s hottest new confessional-style social networking app. You know you want to.

Secret, which launched on Jan. 30, only three weeks ago, with the fitting tagline “Speak Freely,” wants you to cut to the chase already and blurt out what’s on your mind. In fact, the sole purpose of the free (and exquisitely freeing) incognito self-tattling app is to give you carte blanche to spill your guts in a fun, safe way that doesn’t disclose your identity. Phew! And that’s just what users, many of them techie types, entrepreneurs and venture capitalists, from Northern California all the way to the tip of Florida, are doing like wildfire.

Users, cloaked in the emboldening safety of anonymity, are taking to the addictive, gossipy social platform in droves to blow the lid off of some lurid, juicy mea culpas. According to USA Today, tech journalists are using the controversial app to admit accepting bribes to pen articles (gasp!) and startup founders to dish dirt on their investors and, of course, on their minions, too. A married VC even took to Secret to come out of the closet, also according to USA Today. 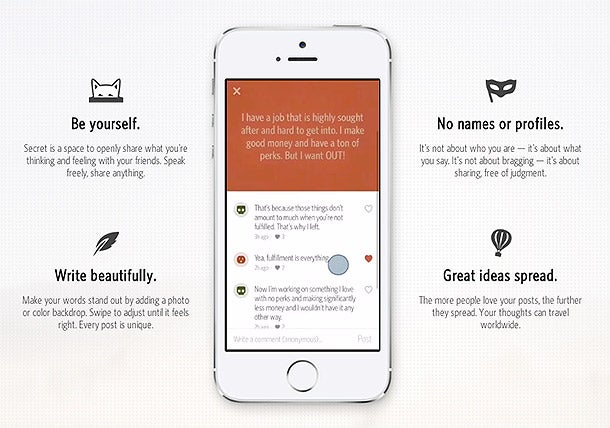 Secret co-founders Chrys Bader and David Byttow are apparently pretty good at keeping secrets. They’re reportedly in no hurry to share how many active users their share-happy app has and they’re equally tight-lipped on speculation that they’re ponying up even more cash in addition to the $1.5 million they raised from Index Ventures, Google Ventures and Kleiner Perkins.

When you post a secret, maybe even admit to stealing or having an affair (let’s hope not), the app anonymously shares it with people in your smartphone’s contact list who also creep on Secret. If your friends get a kick out of your reveal, they can “heart” it, similar to hearting an image on Instagram or liking a post on Facebook. Once hearted, your secret, attractively displayed in a clean white font atop bold colors or slick images, will then spread to your friends’ friends. It’s somewhat like playing “telephone,” but thankfully without the message distortion and face-to-face embarrassment.

Secret’s Apple AppStore description (sorry Android users, it’s only available for iPhone, iPad and iPod touch so far) raises a red flag that users are in for some shocking reveals, stating that it’s for users age 12 and older due to “infrequent/mild” alcohol, tobacco and drug use references and suggestive themes, sexual content and nudity, and profanity and crude humor. Yup, sounds about right. All the naughty stuff juicy secrets are made of.

Not all Secret secrets are so salacious, though. There are also plenty of tame, if not lukewarm leaks making the rounds, too, like copping to leaving skimpy tips at restaurants and poking fun of hoodie-sporting disheveled developers and the like.

The whole point of a secret is for no one to know it. Ever. We can’t help but wonder how devastating it would be for all those divulging users hiding in the nameless social shadows if Secret were hacked wide open. Could cyber snoops tie users’ true identities to their dirty little secrets? The jig would be over, and so would a lot of people’s jobs, partnerships and marriages.

But, hey, until then, why not get in on the Secret to say what’s really on your mind. Download, divulge and don’t hold back. Your secret, real or fake, is safe with us. Yeah, right up until someone tweets about it. Don’t say we didn’t warn you.
More from Entrepreneur