On September 23 last year, a rule-change fundamentally shifted the fundraising landscape for entrepreneurs. And it’s had hundreds of millions of dollars of impact.

The lift of the ban on general solicitation sounds really wonky. But for entrepreneurs looking to raise capital, it simply meant they were now allowed to tell people. Before then, it was illegal for entrepreneurs to publicly advertise that their private company was seeking funding. The rule change allowed entrepreneurs to promote their fundraising efforts however they might want to -- in person, on Facebook and Twitter, or even by shouting it from the rooftops.

Since then, thousands of private companies have raised money publicly, according to data compiled from New York City-based Crowdnetic, a data platform that tracks the industry. From Sept. 23 through Feb. 28, 3,240 private issuers publicly raising -- called PIPRs, for short -- have secured money thanks to the rule change. Some of those companies have closed their round of fundraising, but the 2,594 PIPRs that are currently active have raised more than $116 million already, according to Crowdnetic’s most recent report on the industry.

Crowdnetic tracks data from companies raising money on platforms including AngelList, CrowdFunder, WeFunder, EquityNet and EarlyShares. Crowdnetic compiles industry information and then sells it through a data feed or subscription.

The benefits of the rule change have mostly been felt in Silicon Valley, according to Crowdnetic. While there are private companies raising money through this “crowdfinance” model all across the U.S., California has seen more recorded capital commitments than any other state by far. Taken together, San Francisco and Los Angeles have raised more than seven times what private companies in New York have raised. 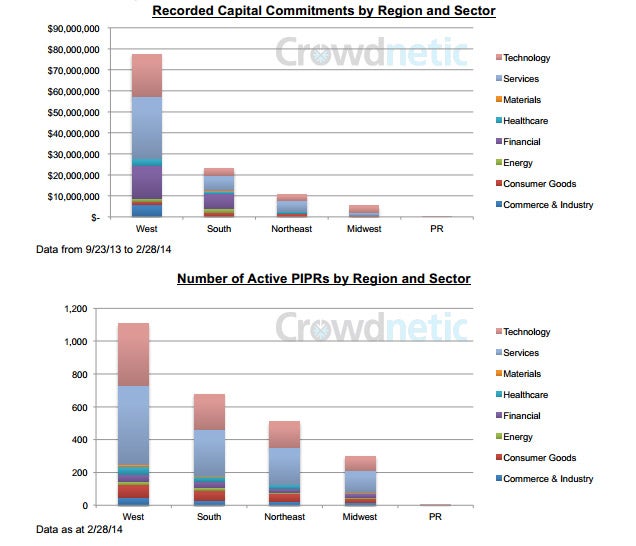 Meanwhile, taken across industries, social media and ecommerce have the greatest number of private companies raising money from investors reached through public advertising. By dollar amount, however, real estate development companies are taking the lion’s share of the funding, with capital commitments of $17 million.

Real estate development’s success in attracting capital is largely due to one blockbuster fund which buys, rehabs and then sells distressed property in San Francisco, according to the Crowdnetic research team. One fund, San Mateo, Calif.-based MIGSIF, has brought in 71 percent of the sector's capital commitments. Investors are flocking to this San Francisco real estate development project because it has been turning steady returns of between 6 and 8 percent and investors only need to lock up their cash for one year before they have access to liquidity options, according to Crowdnetic. 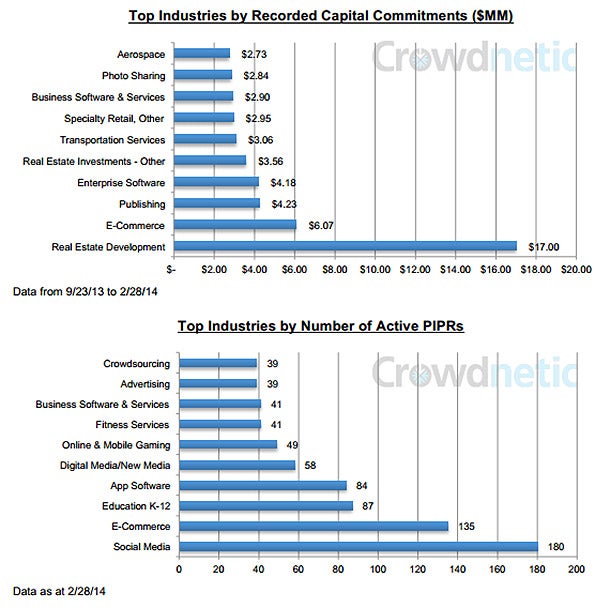 Sell more at Christmas! 5 ways to add customers and tickets