Could Rising Costs Mean the End of Craft Beer Brewers?

With the increased price of hops, craft beer makers could end up being sold to beverage giants.

By Arjun Kharpal May 31, 2014
This story originally appeared on CNBC

Craft beer exploded on to the market over the past few years, capturing the tastebuds of hipsters and connoisseurs alike. But the rise of hop prices could spell the end of the industry's scattering of small independent brewers and make it a ripe sector for acquisitions, analysts told CNBC.

The average price for all hops was $3.59 per pound in 2013, nearly double the cost in 2004. But craft beers are made from a significantly larger amount of hops—and often of a rarer, more expensive variety—than mainstream beers.

As well as pushing the price of a brew higher, the rising cost of hops could see smaller brewers become unaffordable to run and open themselves to takeovers from the global drinks giants, Jonny Forsyth, global drinks analyst at Mintel, told CNBC.

"Brewers will have to pay more—which will push prices up a lot and in some cases mean they will not produce the beers they like. This might affect their innovation pipeline. Consumers are prepared to pay more but there is a limit," Forsyth said in a phone interview.

"Increasingly bigger brewers are accepting craft beer is big, so will need to buy out the smaller brewers. A lot of them are reluctant to sell because they are into the passion of brewing. But if the prices are high that makes it a lot more of an economical decision for them."

The craft brewing industry has seen explosive growth in the U.S., with a 20 percent rise in revenue last year. Craft brewing sales share in 2013 was 7.8 percent by volume, according to industry body the Brewers Association.

Drinks giant Anheuser-Busch InBev has led the way in snapping up craft beer companies. In 2011, the firm bought Chicago-based Goose Island brewer and, citing the "greater consumer interest in craft beer", has recently rolled the brand out across the U.S.

Carlsberg Group told CNBC in an emailed statement that craft beer is a "very interesting market" and one that the company is "monitoring and taking an active part in." ABInBev said the company would always do its "due diligence" on potential acquisitions in the space, but is focusing on "organic growth." 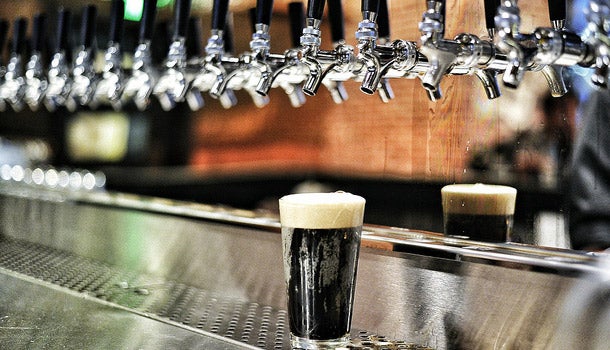 SAB Miller did not wish to comment while Heineken had not replied to CNBC's request for a statement.

Takeovers of smaller brewers will happen, but it will not only be hop prices driving the consolidation, according to Spiros Malandrakis, senior alcoholic drinks analyst at Euromonitor.

Craft beer brewers told CNBC that they were not up for sale. John Brus, one of the owners of Netherlands-based Brouwerij De Molen, said he "doesn't see why" he would sell the business when it is seeing double digit growth. Thornbridge Brewery, based in Derbyshire, U.K. also said it would not consider being taken over.

James Yeomans, founder of London-based Hop Stuff Brewery, however said he could see why some companies would be open to an acquisition.

"I don't think anyone would rule out an acquisition. The question of whether someone is willing to be bought out or not comes down to how much they are offered," Yeomans told CNBC in a phone interview.

Takeovers of craft beer makers is a potentially controversial move, particularly for brewers and their fans. The companies are often local and on a very small scale, making them part of an area's community. Any acquisition by a corporate entity could reduce the beer's appeal, according to the brewers.

"That's not why we got in to making beer, we are passionate about what we do and it's a business," Rob Lovatt, head brewer at Thornbridge, told CNBC in a phone interview.

"If a buyout is your aim, you won't be making the best beer you can, your heart and soul won't be in it then."